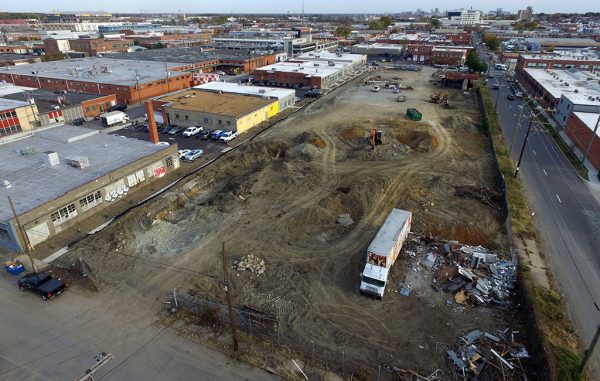 First they were 10 stories. Then they were six. Now, a pair of towers about to rise in Scott’s Addition are set to end up somewhere in between once they’re built along the neighborhood’s entrance off Interstate 195.

Originally proposed last year as 10 stories high, then scaled back to six when the buildings were redesigned, the $80 million project is now planned to consist of a seven-story building at the corner of Roseneath and West Clay Street and an eight-story building closer to the I-195 Broad Street exit.

Salomonsky said a recent change to city zoning for Scott’s Addition that allows for more density prompted him to scale up the buildings from their previous six-story heights. Earlier proposals called for several levels of structured parking within the same buildings as the apartments, but this latest plan calls for an adjoining parking deck behind the buildings from Clay Street.

“The project has been enlarged, we’ve gone higher,” Salomonsky said, “pursuant to the new zoning ordinance, which I think portends a lot of new, significant higher-density projects in the area.” 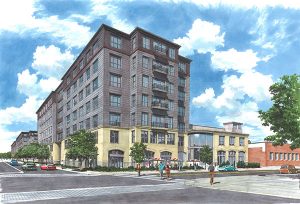 A rendering of the redesigned buildings going up at Roseneath Road and West Clay Street. (SWA Architects)

The heights would be comparable to the bulk of the nearby 3600 Centre building, a block away fronting West Broad Street. In between is Spy Rock Real Estate’s Preserve at Scott’s Addition apartments, while Scott’s View shares its block with a cluster of buildings being redeveloped by Roseleigh Partners LLC.

Scott’s View will consist of approximately 350 apartments above 25,000 square feet of ground-floor commercial space. The three-story parking deck will total about 500 spaces, and amenities will include a central pavilion and swimming pool between the two main buildings.

Salomonsky said he’s lined up a grocery tenant for part of the ground-floor commercial space, which will also include a café at the corner of Roseneath and Clay and a juice bar and lawyer’s office fronting Roseneath. He declined to name the specific tenants.

The apartments will consist of one- and two-bedroom units with rents ranging from $1,100 for a larger one-bedroom with services such as trash pickup, utilities, electricity, cable TV and high-speed Internet included.

Previous plans had included rooftop penthouse units, but Salomonsky said those are no longer included. He said the buildings will be constructed with concrete and steel – a trend that he said he and White’s Historic Housing is doing more of with their buildings to ensure durability and improve sound proofing.

The buildings’ exteriors will feature brick façades at the base and gray metal façades above, with a red-lined cornice separating the top floor.

“In designing this building, we found ourselves trending to more traditional forms and building sculpture to create a style that is more reflective of Richmond, rather than the more industrial-themed designs, which seem to be less humanistic,” Salomonsky said. His SWA Architects firm is designing the project. 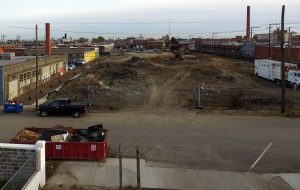 The project will rise on 2.5 acres in Scott’s Addition.
(Kieran McQuilkin)

Salomonsky and White bought the parcel in 2012 for $550,000. Since announcing the project a year and a half ago, Salomonsky said he has received offers from other developers to purchase the land, formerly the site of an asphalt operation. Despite those offers, they decided it was worth going forward with their project.

Grading at the site is currently underway, and Salomonsky said foundation work would begin in January. He said the project is expected to finish in March 2019.

The fast-transitioning block adds to other development occurring along Roseneath. Across West Leigh Street, Tazza Kitchen is working to open its latest location at 1500 Roseneath Road, across the street from the reinvented HandCraft Cleaners building.

A couple blocks away on Broad Street, Better Housing Coalition is pursuing litigation to clear the way for its planned $30 million conversion of the former Quality Inn & Suites building into income-based apartments.

Who’d have thought 10 years ago that Scott’s Addition would become a Hotspot for new housing in Richmond?!! (Oddly enough, the answer might be convicted developer Justin French who had contracted to buy 17 buildings in the district, all to convert to residences.) Well, it’s happening and there’s a lot more to be announced. It’s only the tip of the iceberg if we land Amazon on the Boulevard, but regardless these changes set the stage for major new developments on city and state owned land there. And how about that new Wawa on the corner?

Hopefully they will be less ugly that the buildings originally proposed for the location. I am not hopeful.