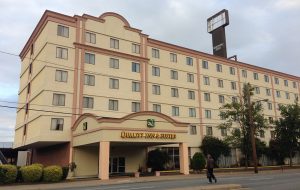 Upon completion, the development would be BHC’s largest single investment in the city in the nonprofit’s 28-year history, according to a release announcing the plans. Construction is expected to begin summer 2017.

“Over the next nine months to a year, we look forward to working with the city, the community and our investment partners to make this development in this strategic community of opportunity come alive,” Greta Harris, BHC’s president and CEO, said in the release.

On Friday, spokeswoman Stacie Birchett said hotel operations at the Quality Inn were expected to wind down over the weekend. Calls to the hotel went unanswered on Friday.

Birchett could not say what the ratio of market rate and affordable housing will be or how many units and how much commercial space will be part of the project.

Built in 1963, the 6-story Quality Inn property is a 136,000-square-foot building sitting on 3.5 acres, bounded by MacTavish and Summit avenues.

The seller in the BHC deal was Midtown Hospitality LLC, which bought the hotel property in 2006 for $3.8 million. The parcel was most recently assessed at $8.8 million, according to city records. BHC acquired the property through an entity called Pineapple Acquisitions LLC.

BHC used a combination of debt from Union Bank & Trust and private equity investment to finance the purchase. Steven Markel, namesake and vice chairman of local insurance giant Markel Corp., is one of the project’s investors. Birchett would not say how many other investors were involved.

BHC hopes to acquire more debt, equity and grant funding as the development progresses. Birchett could not comment on whether BHC’s plans will require a special use permit.

She said Baskerville will be the architect for the job and a general contractor has yet to be picked.

She said the project came about in response to rising rents in Scott’s Addition and the property’s position near a forthcoming GRTC Bus Rapid Transit stop.

“Scott’s Addition is a high profile, rapidly developing neighborhood,” Birchett said. “Rents are rapidly rising out of reach for a lot of modest-income families.”

Rents at the converted Quality Inn are expected to range between $700 and $1,000 a month for a two-bedroom apartment. The apartments could potentially serve families with incomes between $28,000 and $58,000 for a two-person household, BHC said.

Cook said he counted more than 1,200 apartment units in Scott’s Addition in the second quarter of 2016. That’s up from 550 at the end of 2013. The figures only count units at properties with at least 30 apartments.

“We plan to carve out a space for modest income families there,” Birchett said.

The development would be managed by BHC’s in-house management arm. Residents will have free and voluntary access to after school programs, career development, and senior programs either offered onsite or elsewhere by BHC.

BHC’s release described the future development as a “transit-oriented development,” which it described as “high-density, mixed-use development within walking distance of a transit station.”

The nonprofit also is working on an $8.8 million conversion of 2230 Venable St. in Church Hill into a 52-unit apartment complex for renters with incomes between 50 and 60 percent of the area median income.

“We have spent a lot of investment over the past several years in Church Hill,” Birchett said. “Scott’s Addition is a place where a lot of people won’t be able to afford a place to live.”

BHC’s Quality Inn project will add to a steady stream of new development either planned or already underway in Scott’s Addition. Several office redevelopments have recently been put into motion, while new apartment towers are on the drawing board.

I believe that was originally built as a Holiday Inn

Great location to meet an obvious need on West Broad! Congrats to BHC and Markel and we look forward to seeing this ugly hotel transition to a more attractive building and use.

Congratulations. What a great move on the part of Better Housing Coalition. We are involved with affordable and supportive housing in NYC and as Richmond’s urban development continues to go like a rocket, housing affordability will become more of an issue.

Definitely a great idea. It is kind of sad that we have to get non-profits involved in providing affordable housing because the rental market prices continue to skyrocket. My apartment rent alone has gone up 35% in the last 5 years. Single living in this area is just becoming unsustainable even on a decent income.

What I would like to know is, does anyone have plans to replace the 170 medium to budget priced rooms that were just lost in the city? Hotels are incredibly important to an economy as well. It might not have been the nicest hotel but it served the city well, allowing thousands of Richmond visitors to stay there who were headed to events like Redskins Camp, RIR, Squirrels games, the World Bicycle race etc. I stayed there many times myself over the years before moving back to Richmond. It was the only decent hotel in the city regularly under $100.… Read more »

It’s cool that what is happening is exactly what was projected when Bus Rapid Transit was approved: investment follows the route. Investors know that the infrastructure probably isn’t going anywhere, and it’s a viably fast, car-free way to commute downtown from midtown. Similar development has followed BRT in other cities.

Will this be Section 8 housing?

I would think the area could use a smaller upscale tourist hotel, as Scott’s Addition is almost at the point where it’s a tourist destination.
It already is one for beer nerds.

Good lord… You folks posting are painting a rosey picture of what is to become a nightmare for a neighborhood that has recently seen many millions invested toward revitalization. Folks, paint this any way you want, but this is public housing, and the street corner will soon be overrun wirh kids just hanging out. Literally blocking the road. Fighting. Harassing. No oversight. I don’t care if they invest a billion dollars renovating this place. It will be trashed along with the reputation of Scott’s Addition. Is everyone a suicidal bleeding heart on Biz Sense, or did they import these posters… Read more »