The latest mixed-use project proposed in Scott’s Addition has been updated with a new look, a new name and a potential commercial tenant. 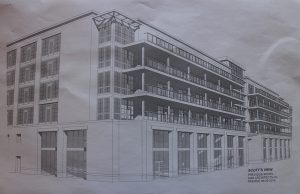 Plan revisions included more glass and steel on the outside.

Following months of discussion from observers and with neighbors, the developers behind two six-story residential towers proposed on the western edge of the fast-developing district have further revised the look of the buildings, once called Roseneath Towers but now named Scott’s View.

The $60 million project, planned for a 2.5-acre site at 1400 Roseneath Road, is proposed by developers Louis Salomonsky and David White of Historic Housing.

Presented publicly in April, an initial proposal called for two 10-story towers, the design of which some observers decried as out-of-character with the historically industrial neighborhood. Plans were scaled back to six stories – the same height as the nearby 3600 Centre building on West Broad Street – and reworked in design with more glass paneling and brick and steel elements on the buildings’ facades.

The latest design was presented Wednesday morning at a meeting of the Scott’s Addition Boulevard Association. Brian White, son of David White and president of Main Street Realty, Historic Housing’s real estate management arm, said the design was drawn up based on feedback from the group and the Richmond planning department and without major changes to the project’s scope and footprint.

Referring to the earlier design, Brian White told the group: “We tend to agree that this in many instances looks a little bit too much like a motel. We didn’t want that character.” 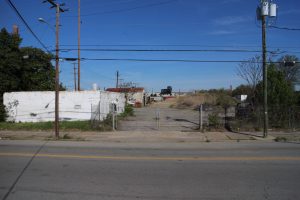 (From April) The site at 1400 Roseneath Road. (Jonathan Spiers)

White added that the changes, which he said were suggested by city planning director Mark Olinger, would make the project “more fitting and more in line with the character of Scott’s Addition.”

While the buildings remain similar to updated versions presented in June – two U-shaped towers with two levels of parking below four levels of apartments that would later convert to condos – White noted the exteriors feature more glass paneling and steel elements to bring the towers more in line with buildings in the area.

“It’s designed to fit within the existing architecture and not stand out as something out of place,” White said.

Roger Bouchard, president of the Scott’s Addition Boulevard Association, said he supported the design, likening it to the nearby HandCraft Cleaners building, which is undergoing redevelopment.

The towers would total between 316 and 364 apartments, which would convert to condos after about three years. Parking would total about 470 spaces on the building’s first two levels, which White said would create a ratio of about 1.7 spaces per unit.

He said discussions continue with Urban Core Development, which is planning a project for property on the other half of the block that currently houses three commercial buildings, on a shared parking plan that would allow commercial users to use the Scott’s View spaces during daytime hours.

White said penthouses planned for the tops of the building may be widened in the final version submitted to the city, though he said that hasn’t been decided yet. And he said negotiations are nearing an end for the project’s potential first commercial tenant, which White described as an organic grocery co-op.

An earlier revision scaled the proposed towers from 10 stories to six.

The grocery, which White did not identify, would fill part of potentially four commercial spaces that would front West Clay Street, unless they’re used for more apartments. He said the grocery would require a 10,000-square-foot space.

The project would require a special-use permit from the city. If approved and the permitting process goes smoothly, White said construction could start as early as next spring.

The developers have secured financing through M&T Bank. They purchased the property, formerly the site of an asphalt operation, in 2012 for $550,000 through Asphalt Plant LLC. Salomonsky’s SWA Architects is designing the project.

Farther east, Historic Housing is eyeing apartments for a warehouse on Overbrook Road. Those plans have received support from the planning commission and are slated to go before city council next month.

The design looks great. Balconies are the key. They are big rent drivers and just as important for condo conversion.

Definitely an improvement in the overall look! The first design seemed like a perfectly fine building but would have been more at home in the suburbs. This design fits stylistically with the rest of the neighborhood, in my opinion. I am excited to see the reduced height and what appears to be commercial space on the ground floor. Scott’s Addition could use more storefronts.

Looks like a much better project. I wouldn’t mind more height – what I minded about the last design was the ugly, its a good location for height

Where is the “green” space? Or green roof? Gratuitous street trees alone are no longer satisfactory landscape solutions.

Green Roofs are silly. Latest unsustainable fad. But it would be nice to see some green space – that said, I bet they have some for the tenants.

I would like to see street trees certainly, and don’t share the previous posters problems with them – street trees are great for cities. Green space can be more problematic in specific projects unless you are trying to destroy the city and make short pump.

The city should find a place in Scott’s addition for public park(s). People are working on that, but public support would be good.

The “earlier revision” was a lot more handsome, architecturally speaking. The new rendering at the top of this article looks like a motel at a random exit off the interstate.