A local development firm’s $26 million plan to set the western edge of Scott’s Addition has begun.

Demolition got underway this week at Spy Rock Real Estate’s apartment conversion and new construction project at the former Coca-Cola bottling plant at the corner of Roseneath Road and Clay Street. 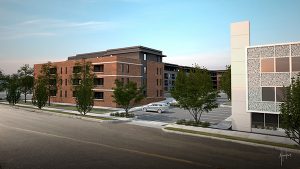 A rendering of the Preserve at Scott’s Addition. (Images courtesy of Spy Rock Real Estate)

The firm last week acquired the 4.5 acres for the project from developer David Dagenhart. Spy Rock paid $3.64 million for the land.

Spy Rock Principal Andrew Basham hopes the 194-unit project will give Scott’s Addition a second Summit Avenue-type corridor of apartments and restaurants at the opposite end of the burgeoning industrial neighborhood.

Preserve at Scott’s Addition, as it’s being called, will be two separate projects. First, Spy Rock is taking on a historic tax credit conversion at the 121,000-square-foot building already onsite. That project will create a 70-unit apartment building with a club room, media room and a fitness center.

Spy Rock then plans to break ground on Scott’s Addition’s only new construction apartment project currently in the works. A new four-story apartment building will add 124 units, each with its own balcony, in the first quarter of 2015.

“It’s the first actual, as far as we can tell, newly built ground-up apartment project of any scale in that area for at least 40 years,” Basham said. 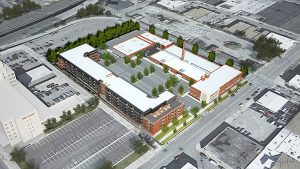 The planned complex would total about 200,000 square feet.

Spy Rock is joining a Scott’s Addition construction boom that could bring more than 600 new units online by early 2015.

Local developer Louis Salomonsky has 132 apartments under construction on Norfolk Street, one block away from the Summit Avenue strip that Isley Brewing Company, Health Warrior and a Lamplighter coffeehouse have all opened up shop in over the past 15 months. Kathleen Richardson is putting her fourth Urban Farmhouse Market and Café on the ground floor of one of Salomonsky’s two buildings.

Between Roseneath and Summit, developers Jerry Peters and Jim Edge have 94 apartments in the works on Moore Street.

Basham says Spy Rock’s interstate and Broad Street visibility coupled with its new construction offering will give it a competitive edge in the market. Spy Rock plans to put a mural on the building’s Broad Street facing façade to make the property stand out from the main drag.

In spite of the competition, Basham said there is still plenty of room for more apartments in Midtown, which he defined as the Scott’s Addition, Fan and Museum District areas. In fact, he said Scott’s Addition could use a few more units to help put its name on par with its surrounding neighborhoods.

“The more options the better, so people will know this is a residential place for apartments,” Basham said. “If you take a 30,000 foot look at what Scott’s Addition is and where it is, ultimately it can be every bit if not more successful than what’s happened in the Bottom and I definitely think we have an advantage over Manchester.”

Nice to see the development but I have to say, the name is absolutely horrible.

Does anyone have any occupancy figures for Scott’s Addition property? From what I understand, the 3600 Centre conversion still has fairly significant vacancy (at least judging by the dozens of listings they post to craigslist every day).

Hey, where is the famous RichmondBizSense map to go with this good reporting??