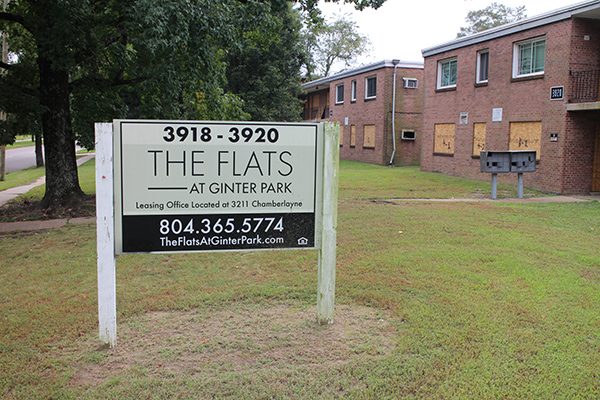 A Flats property with some units boarded up at Chamberlayne and Bellevue avenues. (Jonathan Spiers)

Following numerous housing code violations and unit condemnations that displaced some tenants and prompted multiple lawsuits, a cluster of apartment buildings in Richmond’s Northside is being picked up by a new owner in a court-ordered sale.

A circuit court judge last week approved the sale of The Flats at Ginter Park, an assortment of decades-old apartment buildings scattered along a stretch of Chamberlayne Avenue, following an auction Sept. 12 that drew a winning bid of $16.75 million.

The auction followed the appointment of a receiver in August to take possession of the properties following multiple code violations and condemnations by the City of Richmond against property owner Cedar Grove Partners LLC, a New York-based real estate firm that purchased the bulk of the properties three years ago.

In a span of several months through early 2016, Cedar Grove, managed by Aaron Gorin, invested nearly $20 million purchasing properties along Chamberlayne, picking up more than 600 units in the corridor – about two-thirds of which make up The Flats.

But since then, according to the judge’s order, Cedar Grove allowed The Flats “to deteriorate to the point that the Property was structurally unsound, unsafe, and uninhabitable.” 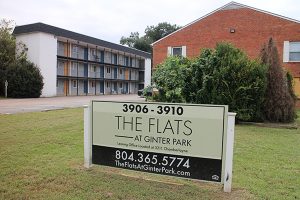 The Flats consist of multiple properties primarily along a stretch of Chamberlayne Avenue. (Jonathan Spiers)

Those complaints stem from a lawsuit brought against Cedar Grove in June by Santander Bank, which loaned the company more than $13 million with the properties as collateral. Those properties consist of dozens of addresses stretching from the 3000 to 4800 blocks of Chamberlayne Avenue, as well as buildings in the 4300 and 4800 blocks of Old Brook Road, and a few on Westminster and Westbrook avenues. The Flats’ leasing office is at 3211 Chamberlayne Ave.

According to court documents, Cedar Grove defaulted on the terms of the loan by receiving the violations and allowing the structures to deteriorate “to the point of risking collapse,” with holes formed in floors and ceilings and leaking sewage flowing throughout properties. The company also failed to provide HVAC and water, and allowed fire doors to be sealed shut, according to Santander’s complaint.

The conditions prompted complaints from tenants who aired their grievances to local TV stations.

The court on Aug. 20 appointed a receiver for The Flats, Massachusetts-based KCP Advisory Group, which took control of the properties and brought on Newport News-based Greenbrier Management as property manager. It then conducted the auction that resulted in the $16.75 million bid from winning bidder Equishares, a Miami-based real estate firm managed by Matt Press.

The court’s approval last Friday authorizes the transaction, which is scheduled to close this Friday, Sept. 28. The purchase price exceeds the amount owed to Santander Bank, and the transaction would clear the property of multiple liens that would be attached to the proceeds.

In a statement, Press said Equishares would move fast to turn the properties around and honor existing leases with remaining tenants. Monthly rents at The Flats range from $800 for a two-bedroom unit to $905 for a three-bedroom, according to its website.

The company, which focuses on income-producing properties, is active in four states, primarily New York and Florida. It would operate locally through a subsidiary, Dwell Richmond.

“Our number one goal is to quickly resolve and improve the numerous life-safety issues in the community and bring dignity back to the residents of the Flats,” Press said in the statement. “These renovations will not displace any existing tenants, all of whom we look forward to meeting as soon as the transaction closes.” 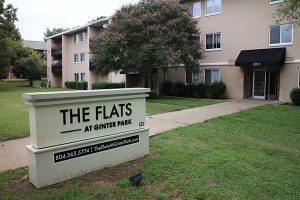 The Flats’ leasing office is at 3211 Chamberlayne Ave. (Jonathan Spiers)

It is unclear what will come of Cedar Grove’s other properties along Chamberlayne that are not part of The Flats. Jeff Kelley, who is representing Equishares locally along with law firm Roth Jackson, would not say if any other deals are in the works, but he said Equishares “is also interested in helping revitalize the entire Chamberlayne Avenue corridor and sees these properties as a first step in that direction.”

Such efforts would add to other investments and rehabs underway in the corridor. Across Chamberlayne from some of The Flats properties, local developer Genesis Properties is in the midst of a $15 million rehab of the 1940s-era Bellevue Apartments, lining the east side of Chamberlayne between North and Westminster avenues.

Attempts to reach Cedar Grove for comment were unsuccessful. A message left for Gorin on the company’s voicemail was not returned Wednesday afternoon.

Cedar Grove is represented in the Santander lawsuit by Kristen Burgers of Richmond-based Hirschler Fleischer’s Tysons office. She did not return a call seeking comment.

KCP responded to inquiries with a statement:

“We are pleased with the outcome of (Friday’s) hearing. We are encouraged that The Flats at Ginter Park will be under new ownership and we are optimistic that the tenants will be provided improved conditions and will continue to have improved site management.”