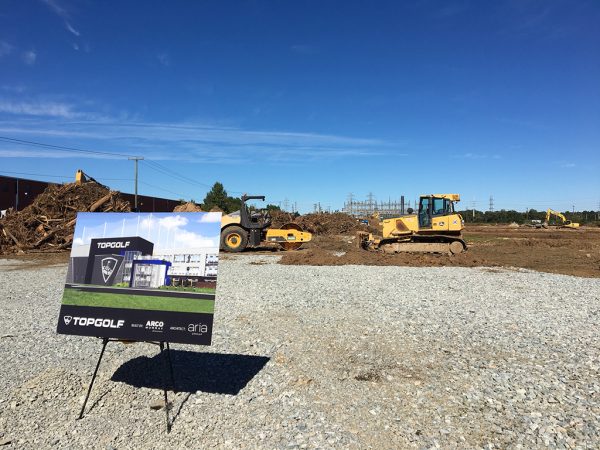 Crews had already carved up large swaths of the property prior to Wednesday’s event.

With heavy machinery already tearing up earth in the background, a fast-growing chain of golf entertainment complexes ceremoniously broke ground Wednesday on its first Richmond-area location.

Topgolf gathered representatives from Henrico County to celebrate the start of construction of its $25.5 million, 48,000-square-foot facility that will rise at 2308 Westwood Ave.

It hopes to open for business in fall 2019 with 350 employees. Chicago-based general contractor Arco/Murray is leading construction on the project. Aria Group is the architect. Locally based Timmons Group has handled site engineering. 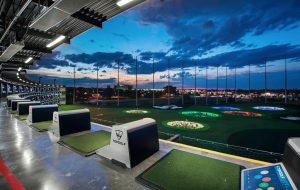 An example of a Topgolf tee line and outfield in Centennial, CO.

Topgolf paid $5.7 million for the 14-acre parcel last month, purchasing it from a partnership between local developers Lynx Ventures and Rebkee Co.

That group paid $6.5 million for the property in a September 2017 deal that also included the neighboring 220,000-square-foot Sears Outlet and distribution complex, and its surrounding 12 acres at 4100 Tomlynn St.

“This is a really big week for golf in Henrico County,” McLaren said, referring to both Topgolf and the Dominion Charity Classic PGA Tour Champions event that begins today at Country Club of Virginia’s James River Course.

McLaren also highlighted the Westwood tract as being part of a surrounding 500-acre area the county is targeting for denser, mixed-use development designed to capture expected spillover from nearby Scott’s Addition in the city.

The county calls the section the “Westwood area” and is looking at how to update existing zoning and infrastructure to capitalize on the primarily industrial corridor that extends from Westwood Avenue to Staples Mill Road.

McLaren hinted to those in attendance of further development coming to the area.

“I think you’ll be hearing about other capital investments being made here in the not-too-distant future,” he said.

Topgolf’s construction begins as its New York-based competitor Drive Shack is well underway on its first location in the region just west of Short Pump in Goochland County.