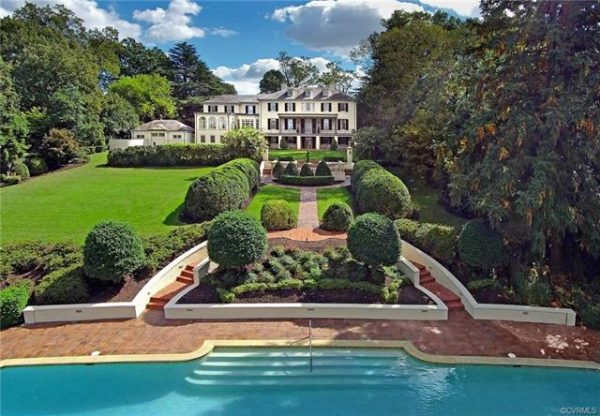 Landscaped gardens and a pool fill the home’s 2-plus hilltop acres. (Photos courtesy of CVRMLS)

The same year that two of its neighbors sold to new owners in multimillion-dollar deals, an even larger mansion last owned by a noted local homebuilder and real estate agent has hit the market on one of Richmond’s priciest streets.

Totaling upwards of 11,700 square feet, the former home of the late Michael Bogese Jr. at 1224 Rothesay Circle was listed for sale Oct. 30 with an asking price of $3.75 million.

Joyner Fine Properties’ Lynn Pritchard and Richard Bower have the listing, which started showings Tuesday after a weeklong no- show period.

Bogese, who purchased the house in 2001 with his wife Susie for $1.7 million, built more than 3,000 homes through Bogese Inc., the family business his parents started in 1945, according to his April obituary. 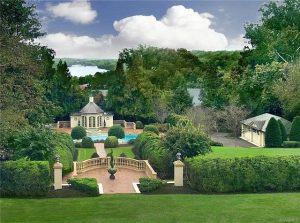 The view from the house includes the James River.

A realtor for 42 years and a past president of the Home Builders Association of Virginia, Bogese also built The Belvedere Apartments near Huguenot and Robious roads, among other multifamily and retail developments. His son-in-law is Jay Ashcraft, an agent with Joyner Commercial.

Bogese purchased the home from Margaret Page Bemiss, whose family had owned it since it was built in 1941. Bemiss, a local author, Garden Club of Virginia member, and VCU alum and donor, died last month at 85.

With six bedrooms, seven bathrooms and two half-baths on more than 2 hilltop acres overlooking the river, the 77-year-old house – renovated and expanded since 2001 – is even larger than the next-door, neighborhood namesake “Rothesay” mansion, which sold in February for $3.7 million. The 10,000-square-foot home on 8 acres initially was listed at $4.2 million.

Also this year, the 6,000-square-foot house at 1215 Rothesay Circle across the street sold in June for $1.62 million, below its listing the previous fall at $2.6 million.

Designed by architect Louis Ballou of Ballou and Justice, and constructed by Claiborne and Taylor Builders, the house was renovated and expanded after Bogese purchased it in 2001. Terry Cox of Manchester-based Cox & Associates Architects designed the renovation. 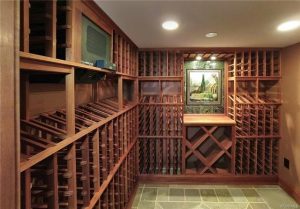 The property also includes a heated pool, pool house with kitchen, and dressing and bathing rooms, heated garages for as many as six cars, a generator, and gardens designed by noted landscape architect Charles Gillette.

Pritchard said she and Bower are marketing the home as they do with other million-dollar listings, including mentions in locally published Estates & Homes Magazine, The Wall Street Journal and D.C.-area newspapers. She said the view of the river, just north of the Powhite Parkway bridge, adds to the home’s appeal.

“It is spectacularly located on top of a hill. You can’t see the view from the street, but when you walk in the house, you’re looking miles up the James River from most of the rooms in the house,” she said. “It is truly extraordinary, because you have no idea until you walk into the house that you’re going to get that view.”

The home joins another multimillion-dollar listing with a westward river view. Downriver south of the bridge, the 7,500-square-foot Doolough Lodge mansion near the Carillon is for sale for $2.25 million, reduced from its January list price of $2.59 million.