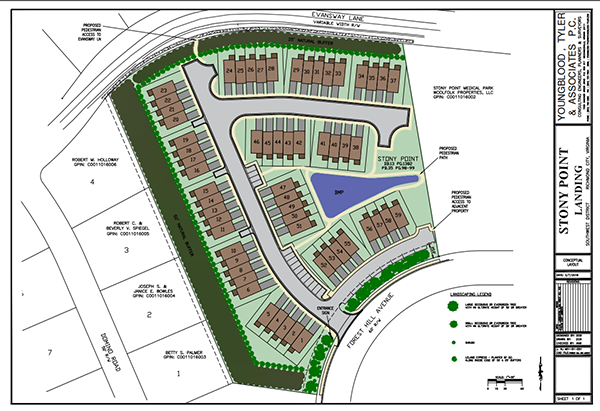 Note: This story has been revised with updated square footage and height details for the townhomes.

A local development firm is eyeing land behind Stony Point Shopping Center for its next project in Richmond.

Dominion Diversified Real Estate Group is seeking city approval for a 59-unit townhome development that would fill about 5 acres at 9230 Forest Hill Ave., just north of the shopping center that fronts Huguenot Road at its intersection with Stony Point and Buford roads.

The $16 million project is the latest from Dominion Diversified, which last year was embroiled in a legal dispute with Better Housing Coalition over plans to redevelop the former Quality Inn & Suites building in Scott’s Addition.

The dispute ended with a settlement earlier this year, and BHC since has entered into a contract to sell the property to Historic Housing, the Shockoe Bottom-based development firm run by Louis Salomonsky and David White.

Dominion principal Spilman Short, who said the firm since has turned its focus toward the hospitality industry with three hotel purchases in the past 18 months and another under construction in South Hill, said the Stony Point development has been years in the making.

Short said he’s been eyeing the property for three years and has had it under contract for two. The land, which a city assessment most recently valued at $704,000, is owned by Laburnum Properties, an entity tied to Bon Secours Health System.

What started as a higher-density development totaling 140 units was scaled back after hearing from neighboring property owners and residents, Short said. While part of a community plan that includes the adjacent Stony Point Medical Park, the Summerhill at Stony Point condos and retirement home, and office buildings across the street, the site also borders a residential neighborhood of lower-density, single-family detached homes.

Working with Reston-based builder Stanley Martin Homes, Short said plans previously called for the units to be built “two over two,” meaning two-level units stacked on top of one another in four-story buildings. That’s similar to the condos Stanley Martin built at Saunders Station near Short Pump and those it plans to build in two infill projects along a stretch of West Broad Street.

Despite the reduction in density, Short said the project is still viable for Dominion and Stanley Martin. Mechanicsville-based Youngblood, Tyler & Associates is handling engineering work.

“We really bent over backwards to try to appeal to the citizens and maintain a project that would make financial sense for us and for Stanley Martin,” Short said.

“We should make a profit at that reduced level, but less than what we would have made at a higher density. We were at the point where we’ve reduced it as much as we can,” he said.

Short noted the involvement of City Councilwoman Kristen Larson, whose Fourth Voter District includes the area. Larson said she is pleased with the resulting project.

“I thought the developer did a good job of holding community meetings, listening to the feedback and modifying their plans based on that feedback,” Larson said. “I think it blends in with the area. It’s kind of a transitional area over there.”

Short said he initially proposed the higher density in light of the property’s walkability to the shopping center, and medical and office buildings, as well as its proximity to nearby Lewis G. Larus Park.

Stanley Martin is designing the townhomes, which Short said would include high-end finishes comparable to the Saunders Station condos. Units will be clustered in 13 groups of four or five, and each unit will include front and rear yards, a one-car garage and enough driveway to park another car.

Called Stony Point Landing, the complex would include a network of sidewalks connecting with pedestrian paths leading out to Forest Hill Avenue. Amenities include a pond, playground and bench swings.

The project requires an amendment to the Stony Point Community Unit Plan, which was created in 1975 and most recently amended last December. The request is on the agenda for the city planning commission’s meeting today. Hirschler attorney Jeffrey Geiger is representing Dominion in its request.

As always, Spilman and his group are endeavoring to bring a much needed product to market. These townhomes are a great fix for the Bon Air market and that specific location

Good location for a townhouse product, but I wish we could get a way from the townhouses where the front is dominated by garage doors. It is the most unattractive form of development. You would think of all the localities the City would have a way to include alleys with garages in the rear for townhouse products. Hopefully they can at least put some detail on the garage doors to dress them up some since they will be the prominent feature.

The community will only have 19 overflow parking spaces? This area is suburban and will require a lot of vehicle trips to do most anything outside of the immediate shopping center. Each home has one space in the garage and one driveway space—that’s not much for most families nowadays. A great way to hide all of those vehicles could have been to have townhomes accessed by a garage in an alley as suggested earlier.

Jacob, two spaces per unit is no less than required for most residential units. Many (like senior housing) require less. The size of the units suggests there will be little need for a third vehicle, based on other new projects in town. The driveways may also be wider than what is shown on the sketch (as needed), allowing for a third vehicle.

I think it is wild to think everyone parks their car in their garage nowadays. Many localities do not allow garages to be counted in developments like this just for that reason.

I’ve never heard of that, but I don’t doubt it. You’d think that if it has a wide door, it counts. Some localities think they have the solution for everything just because it was a problem somewhere at some time in the past. All they’ve done is increase the impervious are outside the home.

The main problem is later when people turn that into a room. Or they store so much that they can’t fit a car in there. It is not a problem from a long ago past. It is a very real modern problem that is quite common. It is not just a wide door. It should have enough clear space from hot water heaters, stairs, air handlers, etc. to be able to park a car. Then there is no guarantee it will stay clear after construction. Plus the big wide door also becomes the main feature of the front of the… Read more »

They are other things you can do to make them look better, but too few builders seem to care. Correct me if I am wrong, but there isn’t anything in the zoning ordinance requiring that the applicant gets a good ROI is there? If you can’t do it right maybe it shouldn’t be done. Why does everyone else around there have to suffer so a builder/developer can walk away with a good ROI? Personally, I think the excuses are just laziness. It has been done in other places with new construction, but some people would just rather do what they… Read more »