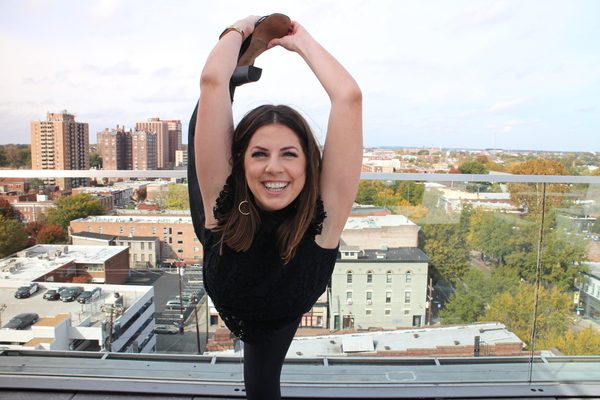 If you want to see Christina Dick serious, get her on a balance beam.

The social media marketer and blogger behind TFB Agency and Tiramisu for Breakfast is better known around town for the enthusiasm and laughter she brings to her work. But when she’s not cracking jokes and connecting with clients, the 30-year-old does what she describes as both fun but also the one thing that puts a serious look on her face: gymnastics.

“The only time I’m serious-looking is when I’m on the beam,” she said, between the occasional laughs. “That’s the only time I’m truly super-focused on something, because you have to be.

“In our industry, PR and advertising, there’s a lot of fluff. You can look at something and you don’t really know what it is,” she said. “You’ve heard about influencer marketing and all these people who have a million followers; it can be frustrating, because you don’t know what’s real, what’s not. But anything with your body and with sports, there’s no faking it. Either you can do it or you can’t.” 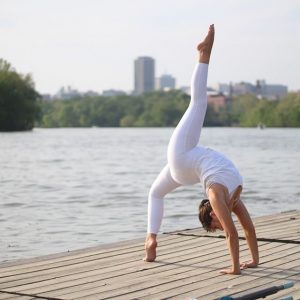 The Portsmouth native has been doing gymnastics most of her life, since she first took a class when she was 12. Today, she gets her fix at Gym Quest Gymnastics in Rockville, where she and a group of fellow adult gymnasts keep up their skills through classes and competitions.

While the majority of gymnasts there are more than 10 years her junior, Dick said her love for the sport hasn’t changed with age – nor, really, has her skill level, which she said is the trick.

“I never got so good that I can’t keep up with all the things I used to be able to do,” she said. “Even though I’m older and larger than I used to be when I was in high school, I can still do everything I could do then, because it’s not like I was Olympic-level.

“My skill level is not impressive at all when everyone else is doing it in high school, but now, since I’ve kept up with it, it’s kind of like the tortoise and the hare. Now it’s like: ‘Oh, that’s awesome that you can still do that,’ and I’m like, ‘This is always what I could do,’” she said, laughing. “If you just never get really good, then there’s no pressure!”

With age also has come a different dynamic with her colleagues and coaches, Dick said, referring to peers in her age group who include an area attorney, a teacher, a PR rep, and social media and brand strategists at Capital One.

“It’s funny, because now we’re adults in the gym and we’re peers with the coaches, but we’re used to being the kids and hearing, ‘Christina, stop talking. Now it’s like, ‘Christina, what do you think we should do about our marketing?’” 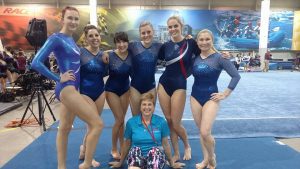 Dick said she’s been going to the gymnastics center since she was 19, soon after she moved to Richmond for VCU, which she learned didn’t have a gymnastics team or club. She and others started a group that evolved into a VCU gymnastics club, and Dick said she also taught younger gymnasts part time.

“It wasn’t anything serious. I’m not very good,” she said. “And I’m not trying to be humble. I’m not a super-good gymnast. This is a fun hobby I try to keep up with.”

Dick said she keeps up with gymnastics because it’s a fun way to work out and extends to other exercise such as yoga and barre. She said her best moves are the pistol squat, an aerial (a cartwheel with no hands) and maneuvers on the balance beam, where she said she finds a focus that can elude her outside the gym.

On the balance beam at Gym Quest.

“With gymnastics and other things with your body, it’s a natural thing and you just can’t force it,” she said. “It’s just a routine and all of a sudden you can do something, and it’s because you’ve had that consistency. That’s not a strength that I have or something I do in other areas.”

While her aerials send her spinning through air and the balance beam takes her to even greater heights, Dick said gymnastics helps keep her life grounded, the concentration she gets from the balance beam literally keeping her balanced.

With her work, Dick said, “There’s so much up and down, where I’m like, ‘Do I suck? Am I awesome? I don’t know.’ Every day is different. But in gymnastics, it’s not like that. Either your body can do it or it can’t.”