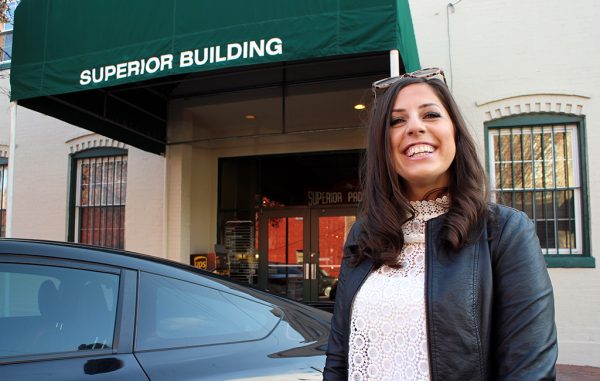 Christina Dick in front of The Superior Building. (Jonathan Spiers)

A social media-centric marketing firm has chosen Shockoe Bottom for its operations hub.

After more than a year meeting with clients at area coffee shops and cafés, Christina Dick is setting up an office for her TFB Agency in The Superior Building at 1901 E. Franklin St.

Dick, a local blogger and adjunct professor at VCU, could often be seen meeting with clients at places like Quirk Hotel since launching the consulting practice in 2016.

While she’ll still be on the move, Dick said the new office will help anchor operations for her and two interns who also will work out of the space.

“I’m still going to meet my clients in their office for planning sessions or weekly or monthly meetings, but for all of these extra meetings at coffee shops, I found that I was driving around a bunch, so I’m excited to have a space,” Dick said.

Laughing, she added: “I should have tried to set up an office in Quirk because I was there so much.”

Dick signed a one-year lease for the 400-square-foot Superior Building space with landlord Secam Properties, which manages and is headquartered in the building.

The building also houses Rainmaker Studios, ad agency Love Affair and video firms PigsAlreadyFly and ShaveFX. Dick said the proximity to those shops and others such as neighboring production firm The Branching factored into her decision to set up in the building.

Dick said the office space will be used for client meetings, with the back half set aside for photo shoots to support her social media channels and her Tirimisu for Breakfast blog.

TFB provides online PR and social media strategy for clients in areas such as healthcare, advertising and higher education. Dick enlists a group of fellow bloggers to provide sponsored content that exposes a client’s products and messages to consumers beyond traditional marketing channels.

Since launching TFB about 18 months ago, Dick, whose career in marketing has included stints at Capital One, The Martin Agency and Big River, has done work for clients such as James River Air Conditioning, Elements of Carytown, Patient First, Elevation, TMI Consulting, VCU Brandcenter and Dr. Michael Godin, a local plastic surgeon.