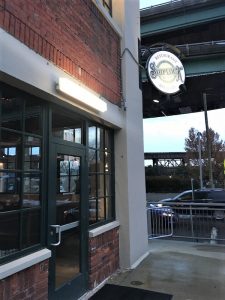 Richmond’s newest brewery is picking up where another left off in Shockoe Slip.

ShipLock Brewing opened this month at 115 S. 15th St., in the space that was formerly home to 7 Hills Seafood & Brewing, which closed in January after opening in 2015.

7 Hills had listed its brewing equipment as collateral in an agreement with Fulton Hill Properties, which owns the building. Fulton Hill purchased all the hardware at auction for $25,000 and, shortly after, brought on ShipLock as a tenant.

Owned by the same group behind District 5 in the Fan and the nearby Southern Railway Taphouse on 14th Street, ShipLock is a brewpub with nearly a dozen beers on tap and a full food menu.

ShipLock is pouring a few IPAs, a Belgian-style tripel, a winter spice beer and a German pilsner, among other brews.

“We’ve got a Helles Lager as our flagship and we’ll probably keep the Robust Porter on year-round as well,” he said.

He added that ShipLock plans to explore distribution at some point. 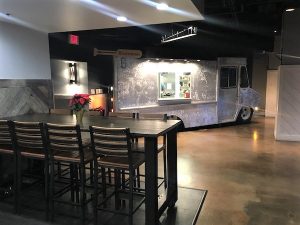 The brewpub has a food truck’s facade built in. (Mike Platania)

Each of ShipLock’s beers is priced at $6. The brewery also has a liquor bar and serves non-alcoholic drinks such as root beer and orange cream ale on tap.

ShipLock Brewing is open from 3 to 11 p.m. Tuesdays through Thursdays, 3 p.m. to 2 a.m. Fridays and Saturdays, and 3 to 8 p.m. Sundays. Otto said they plan to expand hours to include lunch in the spring.

ShipLock is the second brewery to open in the city this fall. Bingo Beer Co., a restaurant-brewery-arcade combo, opened in November at 2900 W. Broad St.

Interesting the food truck facade because doesn’t Lickinghole Creek in the Bottom also have that design? Also, $25,000 for a full brewery setup is beyond a steal. Well played, Fulton Hill.