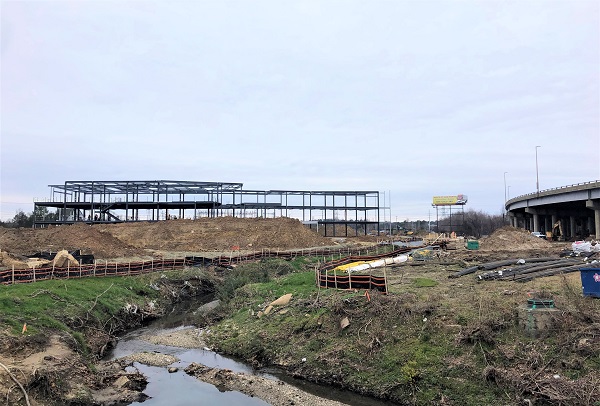 Topgolf’s new facility is set to open in the fall. (Michael Schwartz)

Topgolf will have a new landlord when it opens its $25 million golf and entertainment facility in Henrico County as planned later this year.

Atlanta-based Stonemont paid $5.7 million for the site, the same $407,000-per-acre amount Topgolf paid for it in September.

As part of the sale, county records state that a lease has been struck between the two parties, by which Topgolf will lease the property for 20 years, followed by four five-year renewals.

The two sides have struck at least one similar deal on a Topgolf facility in Minnesota, according to news reports there. Stonemont purchased the land while the venue was under construction and then promptly sold it to a REIT for $37 million once the Topgolf facility was completed.

Topgolf is well underway on construction of its three-story, 48,000-square-foot facility that’s set to open in the fall. Chicago-based general contractor Arco/Murray is leading construction on the project.

A Topgolf spokesperson would not comment about the Stonemont deal when reached Friday.

Why is the Richmond TopGolf the smallest one I have ever seen? Is this a new design for them for 2nd tier markets? The Austin, Dallas, Fairfax and VA Beach are all 65,000 sq ft and up. Even Chesterfield MO (St Louis location) is 65,000. In fact, I can’t find any references to locations under this standard size. As I saw the steel frame over the last week, I couldn’t help but notice how small this facility is compared to a traditional TopGolf locations.

I’m sure it’s because they’re building based on estimated demand. Hopefully they’ll leave themselves room to grow if it takes off here.

They will have some form of competition from Drive Shack in this market as well.