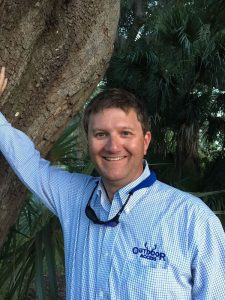 The founding CEO of a touted local startup claims he was forced out by the company because of a side gig that spiraled into a litigious feud.

Aaron Bumgarner, who helped found downtown-based Outdoor Access in 2016, is for the second time in two years embroiled in a court battle with Robert Fischer, a Powhatan landowner and executive with financial firm Morgan Stanley in Richmond.

The latest spat between the two, which is currently playing out in Richmond Circuit Court, alleges that Fischer pressured other Outdoor Access executives to push Bumgarner out of the company, which he claims they ultimately did in July 2017.

The ousting, Bumgarner claims, was fueled by Fischer’s seeking retribution over a timber deal gone sour – a disagreement that led to the first lawsuit between them when Fischer sued in June 2017 in Powhatan County Circuit. In that case, Fischer claimed he hired a forestry business owned by Bumgarner to remove timber on property he owns in Powhatan. Fischer alleged that Bumgarner and his business removed more timber than was authorized, sold it and kept the proceeds from the sale.

While that case in Powhatan was dismissed last March, Bumgarner sued Fischer five months later in the city, seeking nearly $5 million in damages.

The court filings include an email in which Fischer allegedly wrote, “I will pursue you relentlessly using every legal and extralegal means to document and publicize your acts of deception…Aaron, you are not a bad guy, but you did a bad thing.”

Outdoor Access offers an Airbnb-like online platform that lets outdoors enthusiasts and private landowners connect for short-term land rentals for things such as camping, hunting, fishing and hiking. Bumgarner, Jamie Christensen and Buck Robinson founded the company in 2016, and it since has raised at least $1 million in venture capital and expanded its operations into North Carolina.

Prior to Outdoor Access’ launch, Bumgarner had been operating a timber company and in 2014, according to the lawsuits, Fischer and Bumgarner began working on a wildlife habitat plan for property owned by Fischer in Powhatan. That included a plan for a timber harvest and sale in 2015.

Fischer entered into a timber sales agreement with packaging company WestRock in December 2015, Bumgarner’s suit alleges, and that in July and August 2016, WestRock accidentally cut 15-20 oak trees on Fischer’s property that weren’t supposed to be harvested. The suit alleges Fischer entered into the contract with WestRock separately and that Bumgarner’s company was Fischer’s agent for the sale of the timber.

Fischer was upset about the trees that were mistakenly cut and he refused Bumgarner payment of the timber proceeds, the suit claims. 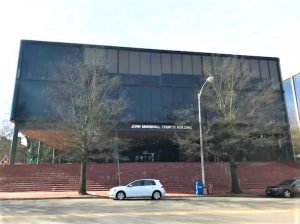 A hearing for the case was held last week at the John Marshall Courts building downtown. (Mike Platania)

The disagreement continued; Outdoor Access was launched the following year. Later that October, according to the latest lawsuit, “Fischer contacted Outdoor Access and informed Christensen about his dispute with Mr. Bumgarner, although the matter had nothing to do with Outdoor Access.”

Fischer then allegedly sent an email to Bumgarner in which he threatened to take a series of actions if Bumgarner did not pay $38,000 to settle Fischer’s dispute about the timber harvest.

In the alleged email, a copy of which was included as an exhibit in the lawsuit, Fischer tells Bumgarner that he will sue him, publicize his actions of bad faith and mail a copy of the judgment to “everyone who has their land listed on the Outdoor Access web site.”

Bumgarner’s lawsuit continues to allege that in March 2017, Fischer contacted Christensen and “falsely alleged that Bumgarner listed Fischer’s property for rent on Outdoor Access without permission.”

Bumgarner also alleges that Fischer, through counsel, provided a copy of the Powhatan complaint to Christensen and, “implied the suit could be amended to add Outdoor Access as a party, although there was no reasonable basis for doing so.”

The suit claims that this all caused the relationship between Bumgarner and the other co-founders to sour, and that he ultimately was forced out of Outdoor Access under duress and that it allowed the company to redeem his shares at a fraction of the then-current market price.

“Outdoor Access has been poised for continued growth,” the suit states. “Due to Fischer’s actions, Mr. Bumgarner will not share in the company’s success.”

Bumgarner is suing Fischer for conspiracy to injure, wrongful or tortious interference with Bumgarner’s contract expectations, and malicious abuse of process. Neither Outdoor Access nor Christensen is named a defendant in the case.

Under the count of malicious abuse of process, Bumgarner alleges that there was no reasonable basis for bringing the case against him, individually. Rather, he asserts, WestRock should have been liable.

As to the count of wrongful or tortious interference, Bumgarner alleges Fischer used improper methods to interfere with Bumgarner’s contract relationship with Outdoor Access, using methods including extortion, unfounded litigation, cybersquatting, harassment by computer, and threats and intimidation.

Bumgarner is seeking $1.5 million in compensatory damages, which could be trebled to $4.5 million, as well as $350,000 in punitive damages and attorneys’ fees.

Fischer is represented by Gary Reinhardt of KPM Law, who declined to comment, saying only that Fischer denies the allegations against him.

In October 2018, Fischer requested the case be thrown out. A hearing on that argument was held Jan. 11 at the John Marshall Courts Building, and Judge W. Reilly Marchant’s opinion is forthcoming.