A rendering of the Union Hill development.

A local homebuilder that’s built its brand on higher-end homes in and around Midlothian is making a push into the city, where it’s preparing to pull the trigger on a Union Hill project that’s considerably different from its typical output.

Jones Homes Custom Builders is making its urban arrival known with several projects in Richmond’s Northside and in Union Hill, where it is planning a nine- to-11-unit apartment development along Carrington Street, on a vacant corner across Jessamine Street from Better Housing Coalition’s The Goodwyn at Union Hill development.

Where that 52-unit, $9.4 million project is targeted to income-based renters, Jones’ apartments are aimed at market-rate renters working downtown, with monthly rents in the range of $1,000 to $1,500 for a mix of one- and two-bedroom units ranging from about 650 to 1,050 square feet. 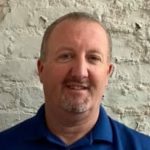 Owner Don Jones said he’s working with city planners to see if as many as 11 units could be built on the site, which consists of two parcels he acquired in a foreclosure sale in 2012. City property records show he paid $46,550 for the parcels, which are vacant.

Jones said the property’s zoning allows for as many as nine units to be built by right. He plans to build at least that many in a project he estimates to cost about $1.76 million.

Jones said the development, along with other projects planned in and around Union Hill and Northside, represents a return to form for his company, which he said got its start in the city but since has become known for custom-design houses primarily in Midlothian that these days hover around the million-dollar mark.

Jones said he’s spent the past year or so quietly assembling a portfolio of inner-city properties in an effort to return to his homebuilding roots.

“We cut our teeth in the city back in the day renovating and building $150,000 and $250,000 houses. We’re at a point where we’re blowing past the $1 million price point regularly, and that’s a place we – I’m going to say unfortunately – got pigeonholed into,” Jones said.

“Most people think it’s a great place to be – and believe me, it is. But what I find is it’s taken me away from my initial passion, which was in the city building affordable, beautiful housing, adhering to historic fabric of each block and each neighborhood respectively. These things we build now are just these engineering marvels.” 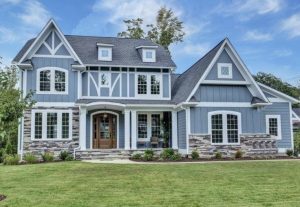 Jones referred specifically to homes his company has built in communities such as Hallsley and Magnolia Green. The company’s designs have been featured in recent home showcases such as Parade of Homes and Homearama, and while he plans to remain active there, Jones said his focus is on the city.

“We’ve started putting some signs up in the city,” he said. The company is branding its inner-city push with the catchphrase “Jonesin’ in the City.”

While he said the portfolio of properties he’s amassed stretches from Petersburg to Hanover County, Jones has his sights set on Union Hill, particularly along the cobblestone Carrington Street corridor, where a notable amount of vacant home lots and infill opportunities have drawn development interest.

Jones said he sat on the Jessamine property until the time was right, consulting with other builders and developers active in the area, including Bryan Traylor and real estate agent Dave Seibert, whose signs dot several sections of the street.

“I believe strongly in that whole Union Hill/Fairmount area,” Jones said. “There is no question that it’s the next boom. The question is how quickly guys like Bryan Traylor and I can push it there, amongst other guys. 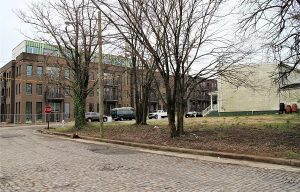 “We were waiting for some indications to press forward, because it’s a pretty big investment,” Jones said of the Jessamine project. “At this point, we want to pull the trigger. I see the neighborhood turning a corner.”

Jones noted The Goodwyn at Union Hill, a redevelopment of the old Citadel of Hope property, is nearing completion, contributing to the timing of his project – though he stressed that the two projects are different animals.

“They’re going for the low-income housing credits, and I’m not,” Jones said, referring to BHC. “That’s not where I want to take this neighborhood. I think we have a really viable product here that is going to appeal to the business professional downtown just over the Leigh Street viaduct – VCU, MCV – that are going to be looking for a high-quality place to live in an up-and-coming area.”

Jones is working with Bob Steele of BOB Architecture on the apartments’ designs, which are subject to the city’s Commission of Architectural Review. If the city approves a conditional-use permit to allow 11 units, Jones said that would add about six months to the project’s schedule.

Without the permit, he said construction could start in two to three months, and he said he’s aiming to have the units completed and available by summer. Jones Homes would be the contractor on the project. He said a property management firm hasn’t been selected.

Jones Custom Homes is a builder affiliate with Clocktower Realty Group, which lists its for-sale properties. Jones said Clocktower’s Rhonda Carroll has been consulting with him on rent packages for the apartments.

Jones said he has other parcels in the vicinity that he’s trying to assemble for a comparable project. Beyond Carrington, he said he has homes planned or underway on parcels in the 1300 block of 23rd Street, and in Northside along Third, Fifth, Carolina and Monteiro avenues.

Jones said he’s spent about $1 million acquiring 20 or so properties and plans to put about $8 million into developing them. He said he works with several banks, including TowneBank, Essex Bank and Citizens Bank & Trust.

A retired private banker, Jones launched his company in 2005 after moving to Richmond from New York. Having grown up around the building construction industry, he said he invested in land in and around Richmond prior to moving here, with the goal of tapping into the local housing market.

“Now it’s time to kick it up more on a commercial level,” he said. “I have the financial wherewithal to do it, and if I can find the right piece of land that would accommodate the zoning, we’re going to push the envelope as hard as we can. In the city of Richmond is where I want to be.”

This is the second Midlothian homebuilder in a week whose presence in the City has been announced by BizSense, the other being Lloyd Poe in the Museum District. Both are quality builders and HBAR members. We welcome them to the City. RIchmond needs high quality market rate for- sale housing to complement the growth of its rental inventory. it’s great to see that they recognize the urban opportunities.