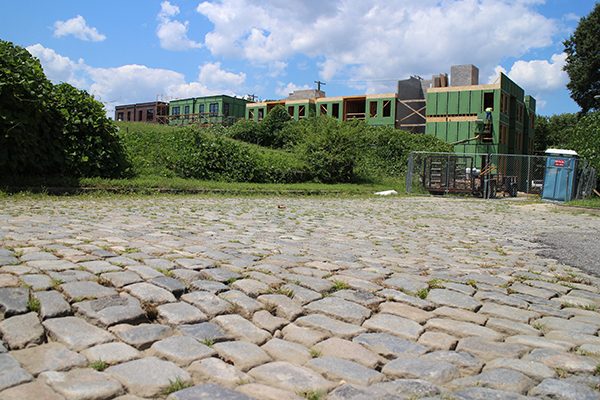 The Goodwyn at Union Hill apartments rise above the nearby cobblestone Carrington Street. (Jonathan Spiers)

A local nonprofit’s redevelopment of the Citadel of Hope property in Union Hill is taking shape, anchoring a wave of new development that has some neighbors concerned about impacts to an adjacent cobblestone street.

Construction is nearing the halfway point for The Goodwyn at Union Hill, Better Housing Coalition’s conversion of the 2-acre citadel property along Venable Street into 52 income-restricted apartments.

Plans for the $9.4 million project have changed in design since they were presented to the city’s Commission for Architectural Review in 2016, about a year after BHC announced the project.

Where initial plans called for 32 of the apartments to be housed in one building along Jessamine Street, those units are being broken up into four detached buildings in light of feedback received from the commission and the community, said Lynn McAteer, BHC’s vice president of planning and evaluations.

“They felt that one large building along Jessamine Street would be inconsistent with the character of the neighborhood, so we broke the building up so it has a little bit more of a neighborhood, residential feel, rather than a multifamily feel,” McAteer said. 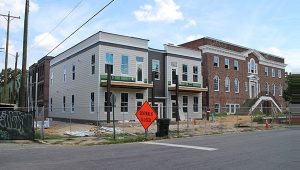 The Citadel of Hope building, visible at right, is being restored as part of The Goodwyn project. (Jonathan Spiers)

The budget also has changed, up from $8.8 million in 2016, as has the schedule, which is now on track for a December completion. BHC previously aimed to finish the project by the end of last year, but McAteer said the review process with CAR extended that schedule.

The contractor on the project is J.D. Lewis, which is building the mix of eight one-bedroom units, 33 two-bedrooms and 11 three-bedrooms ranging in size from 500 to 1,162 square feet. The income-based units, designed by Walter Parks Architects with engineering by Timmons Group, will rent from $550 to $900 per month.

While construction is filling the site, the development and others underway or in the works in the area have some neighbors concerned about the fate of Carrington Street, a cobblestone road parallel to Venable that borders the citadel site and is planned to provide the only access to the apartments’ on-site 52-space parking lot.

And it’s not just The Goodwyn that has neighbors concerned and led some to rally to preserve the cobblestones.

According to Carrington resident Raymond “Sonny” Hughey, who has been researching and raising awareness of planned development for area group New Visions Civic League, the apartments and several other projects along the street could result in dozens of new vehicles using Carrington – a road wide enough for two-way traffic but crowded with on-street parking in some sections.

Parts of the road have been patched with asphalt, and Hughey and others have said a concern is that the road could be paved over to accommodate the influx of development.

A rendering of The Goodwyn as it would appear along Venable Street. (Courtesy BHC)

“We’re going to see an increase in traffic on the street. As it stands right now, it can’t support what it’s designed to support,” Hughey said.

“We haven’t really decided on any solutions or changes, but we are rallying support within the community and among some of the builders and other people just to make sure that the street is prepared to grow with the neighborhood as it changes, especially on that stretch.”

Hughey said about half of the properties along Carrington are controlled by nine owners, some of whom have lent their support for improving the corridor, as has the Union Hill Civic Association.

Bryan Traylor, a local homebuilder active in Union Hill and nearby North Church Hill, is among those supporting a closer look at the corridor, where he is building three duplexes and a single-family home.

“That area is quickly changing. We need to keep the historic nature of the cobblestone, because there are few roads that exist like that,” Traylor said. “That’s one of the last full-bore, multiblock cobblestone streets left in Richmond.

“By improving the roadway, you’re going to improve positive traffic, both foot and vehicular,” Traylor said, adding that the road provides a connection between 25th Street and the Leigh Street/Martin Luther King Jr. Memorial Bridge.

For several months, Hughey said New Visions has received letters of support for improving the corridor from Traylor, other developers and the Union Hill association. Representatives also met with City Councilwoman Cynthia Newbille and Richmond public works officials about possible courses of action.

Hughey said the city plans to review the road, and determine potential costs and revenue sources for adding sidewalks and restoring cobblestones along the patched road.

Richmond’s public works department estimates the cost of restoring the cobblestone street and adding a brick sidewalk at $700,000, or $500,000 with a concrete sidewalk. Department spokeswoman Sharon North said there are no funds allocated for that work, which would not involve widening the street. She said the city would continue to patch the road and fill potholes using asphalt. 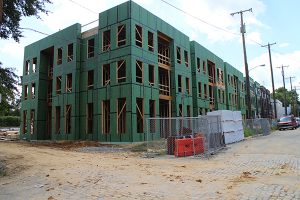 Apartments along Jessamine Street have been broken up into four detached buildings. (Jonathan Spiers)

While BHC’s apartments will add traffic to Carrington, McAteer said it falls on the city to make any improvements, which she said the nonprofit is willing to support.

“It is a historic and quaint street, because it’s all cobblestones. Obviously it’s a public street, and it’s the city’s responsibility for maintaining that,” she said.

“We, Better Housing Coalition, have a fair amount of investment in that area of Church Hill, so we would definitely be willing to advocate for the ongoing maintenance of Carrington to preserve that historical quality of it, along with the civic association and any neighborhood groups.”

Hughey said such support would be needed to see the effort through, whatever decisions are made about the road.

“It needs to at least be maintained so it’s uniform throughout. If it’s allowing two-lane traffic and parking on both sides, it needs to be wide enough to do that,” he said. “If widening the street isn’t something that is possible, then possibly turning it into a one-way, or only allowing street parking on one side.

“There are a lot of different solutions to the issues at hand, but that’s something that needs to be discussed further,” he said.

The activity along the Carrington Street corridor adds to other development occurring in and around Union Hill.

Across 25th Street, work is progressing on a redevelopment of a block of 19th-century rowhouses along O Street. A few blocks north, construction is underway on a mixed-use building that will house a culinary school at the intersection of 25th, Nine Mile Road and Fairmount Avenue, where a grocery story also is planned.

Is the BHC advocating for themselves and the other property owners to foot the bill for the road improvements?

If not, how can they justify asking for $700k from the city with no money set aside currently in the budget to do such a project?

Are there no other roads in the city that need improvement at this time
So this is next on the list?

Should they take it from RPS school system or that new homeless shelter?

The BHC stated that they are supportive of maintaining the cobblestone and but did not clarify that in terms of financial support. They are not speaking on behalf of the property owners but solely themselves. They are also not asking for 700k for the road, simply stating their support. To answer your last question, the safety of this road directly affects RPS and low income residents. MLKJ Middle School is one block away from this street- a street that has no sidewalks and multiple intersections involving 3+ cross streets with lack of street signage the entire length of the road.… Read more »

Well then based on that it seems priority #1-3 would be new sidewalks, ADA compliant intersection cross walks and increased signage as as result of the increased school foot traffic from the new developments.

The main subject of the article is in reference to preservation of the cobblestones due to its historic quality, not until your reply was it mentioned the neighborhood concern was really for child safety as they walk to school. I think most would agree funds should easily be appropriated for those improvements. Thanks for the clarification.

From my experience, students don’t walk on sidewalks in that area, (even when available) they walk in the street. Save the money on that & use it to restore the cobblestones.

I drive by this development often and it looks NOTHING like the rendering. Instead of a pretty white, they used an ugly beige for the two flanking buildings on Venable. The beige buildings look incredibly cheap – ugly modern. This is so ugly for the neighborhood – it could be redeemed slightly if they paint the side buildings all white (get rid of that weird grey in the middle) – I hope they see this comment and try to fix it! You’re better than this BHC.

Hello Marty, I hope you provided input during one of the numerous neighborhood meetings BHC and the architects held over a two-year period to present (and adjust) the plans to better suit the community as well as The Goodwyn’s future residents. While it would be impossible to please everyone, the construction looks strkingly similar to the rendering, as this comparison image shows (see link). Our hope is that the Goodwyn will become a neighborhood asset once it is completed and families begin to move in. (Disclosure: I am Communications Director for BHC.) Progress photo vs. rendering: https://www.facebook.com/betterhousingcoalition/photos/a.148893077738.114406.91080032738/10155918595477739/?type=3&theater

Is it going to be painted white then? I didn’t live in north church hill during the review process.

That shade of beige is the natural color of the James Hardie siding before its been painted.