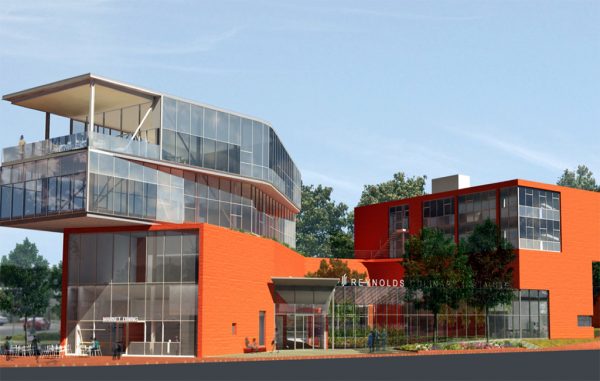 Rendering of the planned culinary school for Reynolds Community College.

A project aimed at improving public health and food availability in the city’s East End is now underway at a transforming urban crossroads.

Construction is starting with a four-story building that will house a culinary school for J. Sargeant Reynolds Community College, along with office space, a restaurant and a dozen apartments.

The modern-style building, designed by the same architecture team behind the Institute for Contemporary Art at VCU, will rise on a 0.3-acre parcel at 2500 Nine Mile Road.

Work soon will begin on a mixed-use building that will fill a vacant city block on the other side of 25th Street along Fairmount Avenue.

That four-story building will house a 27,000-square-foot grocery store, 42 apartments and 8,500 square feet of retail space. A Jim’s Local Market store had been planned for the grocery space but is no longer part of the project.

Spearheaded by philanthropists Steven and Kathie Markel, the complex aims to provide healthy food options and nutritional resources to that area of the city, which observers say is devoid of traditional grocery and produce options. 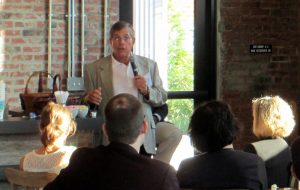 Both buildings are aimed to be operational in about 18 months. While a replacement for Jim’s Local Market has yet to be announced, Steven Markel, vice chairman of local insurance giant Markel Corp., said he is working out details for the grocery’s operation and could announce a new operator in coming weeks.

Markel provided an update on the project at a meeting Wednesday of ULI Virginia, the state chapter of Urban Land Institute, a Washington, D.C.-based nonprofit.

Markel said the culinary school, which will house and expand Reynolds’ culinary arts program, will be a significant step for the community college. Several VCU schools also will be represented in the building, providing nutrition education and other community services. The VCU Brandcenter has been enlisted to develop a brand for the facility.

“The Brandcenter helped put VCU on the map. Why can’t this culinary school help put Reynolds on the map?” Markel said.

The culinary school would fill 23,000 square feet in the building, which would also feature a top-floor restaurant and office space that would total another 10,000 square feet.

Hourigan Construction is set to build the structure, which is designed by New York-based O’Neill McVoy Architects and local firm BCWH – the same architecture team behind the ICA under construction at Belvidere and West Broad streets. The mixed-use building across the street is being designed by Richmond-based Freeman Morgan Architects.

Markel, whose company made a financial contribution to the ICA and secured naming rights to the building – formally called Markel Center – said he met O’Neill McVoy principal Chris McVoy as part of that process, leading to their collaboration on the culinary school.

Markel would not say how much he and his wife are investing in the complex, which is being funded in part by a $500,000 grant from the City of Richmond. Markel said he is pursuing federal funding assistance through the U.S. Department of the Treasury’s New Markets Tax Credit Program.

“We do not expect this project to make any money; however, we would like to lose as little as possible,” Markel said. 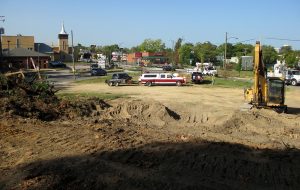 Markel acquired the properties through an LLC in June 2016 from the Richmond Redevelopment and Housing Authority. City property records do not reflect a transaction amount for the three parcels.

Markel also owns the property at 1111 N. 25th St. that houses a Fit4Kids, Urban Hope and Maggie Walker Land Trust. He said the building has additional space available and is seeking another office tenant.

Meanwhile, other developments are in the works in the area along Nine Mile Road. Church Hill North, a redevelopment of the old Armstrong High School site, is planned to add 256 homes by fall 2018.

And Bon Secours is planning a 25,000-square-foot medical office building in the 2600 block of Nine Mile Road, across the street from its recently finished 4,000-square-foot Garland Center, consisting of a community meeting room, a kitchen facility and Front Porch Café, a coffee shop run by local nonprofit Church Hill Activities & Tutoring. The café, which hosted Wednesday’s ULI meeting, is planning a soft opening next Friday.

[…] executive Norm Gold to lead the development and management of a new grocery store at the planned Church Hill North Retail Center. And construction is wrapping up on a mixed-use building on a triangular lot along North 23rd […]