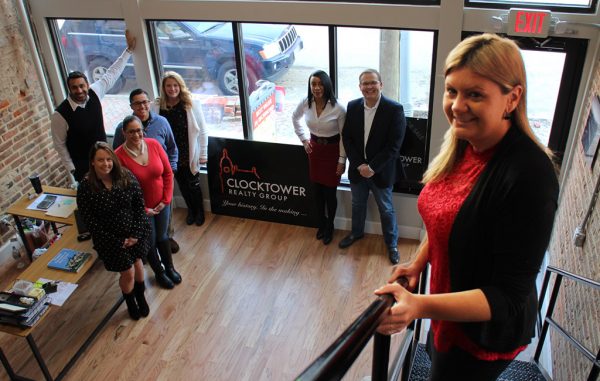 Rhonda Howlett and some of her 35 agents in Clocktower Realty’s new office. (Jonathan Spiers)

A growing real estate brokerage has moved into new digs in Shockoe Bottom, sharing a trio of rehabbed buildings with a dozen new apartments.

Clocktower founder Rhonda Howlett shares ownership of the office space, which totals 3,500 square feet. Above and behind it, one- and two-bedroom apartments fill the rest of the buildings, expanded from 12,000 to 14,000 square feet as part of the rehab.

Clocktower is handling leasing and property management. Leasing started this month, and two of the 12 units were leased by the end of the first week, Howlett said.

Each apartment has exposed brick walls and access to a shared courtyard. Some units also include original skylights and remnants of the buildings’ past, such as parts of a pulley system for a 1930s-era elevator.

Part of the buildings, which more recently housed Crave Grille Bar & Lounge and Kave Bar and Grill, was turned into a garage with access off an alley. Howlett said she and two of her agents will use the garage, which has room for about three cars and some storage.

Historic Housing put about $2.2 million into the rehab, $1.75 million of which was financed by Park Sterling Bank. Salomonsky purchased the property through 1705 E Franklin LLC last April for $502,000, according to city property records.

Salomonsky has become one of Howlett’s clients, she said, and she also has hired one of his sons, Henry Salomonsky III, as an agent.

Clocktower’s agent count has grown to 35, up from 14 last May, when the brokerage was housed at 1561 E. Main St. Howlett, a Keller Williams vet, launched Clocktower that January.

The business adds to other real estate firms in and around the Bottom, such as Salomonsky and White’s own Main Street Realty. Nearby in Church Hill, Icon Realty Group launched in 2016, and Long & Foster is opening an office this spring at Patrick Henry Square.