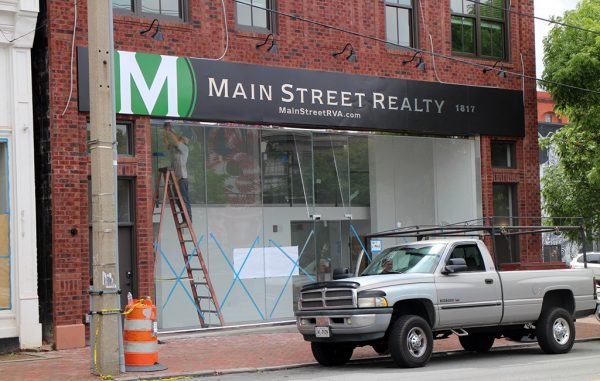 Signage for Main Street Realty has been placed above its new office at 1817 E. Main St. (Jonathan Spiers)

A Shockoe Bottom-based development firm didn’t have to look far for a tenant to fill a commercial storefront it’s constructing in the heart of the downtown district.

Main Street Realty, the real estate management arm of developers Louis Salomonsky and David White’s Historic Housing, is setting up an office in the ground-floor, glass-paneled storefront at 1817 E. Main St. – a two-story mixed-use building being constructed as part of the developers’ adjacent Overview Cityside apartments.

That project – an eight-story, 76-unit new-construction building – is the fifth phase of Historic Housing’s redevelopment of the former Philip Morris warehouse complex, which the firm purchased in 2000. The complex has been converted into more than 500 apartments, including the 124-unit Overview Riverside – previously known as Lofts at River’s Fall – and the three-building Lofts at Canal Walk complex between 19th and 20th streets.

The 1,500-square-foot Main Street Realty space will serve as the management office for those five buildings, as well as the public face of the company, said David White’s son, Historic Housing’s Brian White.

“We want it to be the front door to Main Street Realty from a marketing perspective,” Brian White said.

White said the storefront, featuring a glass wall that makes the interior visible to the street, is designed to evoke the vibe of an Apple retail store, as the office also will be equipped with digital displays, enhanced high-speed Internet, and iPads that visitors will be able to browse and agents can take with them on property tours. 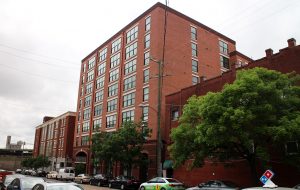 “Even though only the properties within a city block of there will be managed out of that office, we’re going to have information and materials on all of our Richmond properties available in that office, because it’s going to be so visible and such a neat space.”

About five to six employees will be stationed at the office, including a property manager, assistant manager and three to four leasing agents, White said. The office is slated to open May 20, the same day Main Street Realty plans to hold an open house for Overview Cityside, finishing touches for which he said are wrapping up.

The realty staff will be moved from Main Street’s office two blocks away at 1559 E. Main St. – one of several leasing offices it maintains throughout the city. It currently shares the building at 1561 E. Main St. with Historic Housing, Salomonsky’s SWA Architects, and Candela Construction – a successor to Historic Housing’s traditional construction arm, SWA Construction.

The 1817 E. Main St. building, which includes two apartments above the realty office space, was approved in 2015 as part of the Overview Cityside project, previously referred to as Canal Lofts V.

White said work on Overview Cityside is wrapping up. He said all in, the 8-story apartment building and the two-story mixed-use building cost a total of $14 million to develop. M&T Bank provided financing for the project, and Historic Housing covered general contracting and architecture work.

White said they have secured certificates of occupancy for the lower half of Overview Cityside, which will share amenities with the adjacent Overview Riverside apartments that front East Cary Street. Those amenities include a pool, gym and indoor parking. 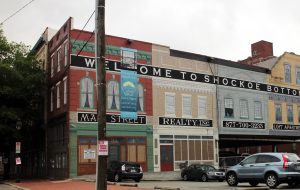 Overview Cityside also will have a rooftop terrace and community room with furniture and games. The two units in the two-story mixed-use building will have access to the shared amenities.

Those two units range from 700 to 800 square feet. White said they will be comparable to the Cityside units, which range from about 670 to 1,000 square feet and will rent from $1,225 to $2,300 per month, according to their size and elevation in the building. White said the two units on Main Street would likely be lower rents, as they are accessed by stairs without an elevator option.

Cityside consists of one-bedroom units with one or 1½ bathrooms and two-bedroom units with two baths. He said they’ll include high-end finishes and city views that warrant the rents, which he described as being on the upper-end for downtown.

“The finishes in there are a step up from what most people have in the marketplace,” he said.

“We’ve decided – I hope we’re right – that as people have continued to rent longer than they used to … they want somewhere that’s going to feel more like a home and be a place with really nice features and a nice place to live, without all the responsibilities of maintenance and cutting grass,” White said. “That’s what we think this building is going to appeal to.”

Overview Cityside is the latest completed project for Historic Housing, which also is converting a former tobacco warehouse at 1650 Overbook Road into Overbrook Lofts, planned for as many as 117 apartments. It recently secured approval for a five-story apartment building in Shockoe Bottom at the foot of Libby Hill, and also is planning two six-story residential towers at 1400 Roseneath Road in Scott’s Addition.

Salomonsky’s architectural design and real estate development career mirrors that of the City. I had the pleasure of seeing a power point of his many projects dating back to the 60’s and it’s quite impressive how they’ve endured the years. Their current office space should make excellent space for new uses.