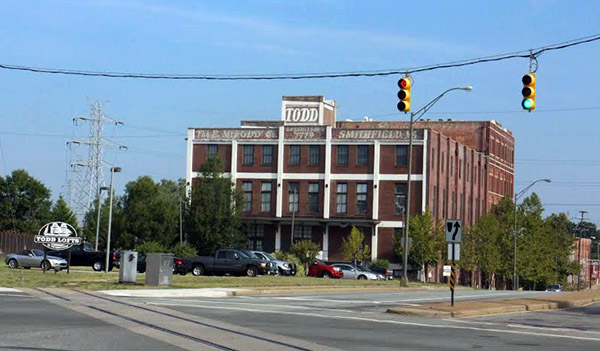 Main Street Realty’s Todd Lofts building is one of four apartment properties up for sale. Photos by Burl Rolett.

Four large Richmond apartment properties are up sale as their owners look to strike while the market is hot.

Main Street Realty has listed its Coliseum Lofts, Todd Lofts and the Wedge at Courtyard Lofts for sale, and developer Tom Wilkinson has put his Hopper Lofts in Manchester on the market.

All told, the four properties weigh in at 416 apartment units.

It’s the second time in a year that Main Street Realty, run by developers David White and Louis Salomonsky, has listed the Coliseum Lofts. The property went up for sale last October and was briefly under contract to a Washington, D.C.-area buyer. 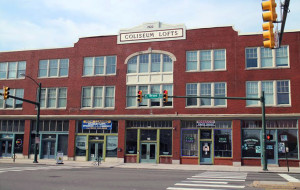 The Coliseum Lofts at 1359 W. Broad St. is for sale again as part of a larger apartment package.

Chris Chadwick, a broker with Marcus & Millichap who is marketing the Main Street Realty properties, said the suitor backed out of the deal after getting cold feet about entering the Richmond market with just the 123 units the Coliseum Lofts.

Now Main Street Realty is bulking up the offer with the addition of 100 units in the Todd Lofts at Hermitage and Leigh streets and another 54 apartments at the Wedge near 14th and Main.

“(The Coliseum Lofts) was fairly small for an out-of-town buyer,” Chadwick said. “If we can get above 250 units, then we can bring national players, REITs, etc., to the table. They need that kind of size.”

The Coliseum Lofts was renovated into apartments nearly 15 years ago. The Todd Lofts building was rehabbed about eight years ago with the Wedge following about two years later. All three were renovated using historic tax credits.

The largest historic tax credit rehab sale so far in 2014 was the Lava Lofts in Church Hill that sold for $8.2 million in February.

Main Street’s move to sell the pair of older midtown apartment buildings comes as it is building two more in the area. The Shockoe Bottom-based company is finishing the second of two buildings at Norfolk Street and Summit Avenue in Scott’s Addition. It is also preparing to convert a large warehouse near The Diamond into 173 apartments. 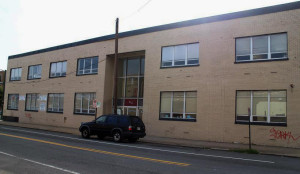 Plans for an apartment project at 613 N. Lombardy will be presented to the city planning commission tonight.

Salomonsky will also take a plan for a 13-unit apartment conversion at 613 N. Lombardy St. to the city planning commission Tuesday. The property sits on the same block as the Coliseum Lofts.

Hopper Lofts’ units are a mix of one- and two-bedroom apartments with average rental rates of about $1,000 per month. The building is about 95 percent occupied, Wilkinson said. The 139-unit property hit the market last month, also brokered by Chadwick.

Wilkinson redeveloped Hopper Lofts after buying the property 2010 with the help of historic tax credits. At the time, he saw the Hopper Lofts as a long-term investment. Now he said he thinks he has an opportunity to cash out and move on to other projects he would like to do in the Richmond and Portsmouth areas.

“The plan had been to hold on to it for a long time and generate the cash flow from it,” he said. “But with the market turning as high as it has people have wanted to make investments in apartments, so why not?”

These are smart moves on the part of these developers. They have the ability to create great value in development but the increase is more incremental as the years go on and the tax abatement rolls off. Thats when its time to let the REITs step into ownership.

Many of these HTC projects would benefit significantly from solar. I can explain to anyone who is interested. This is all great news for Richmond!