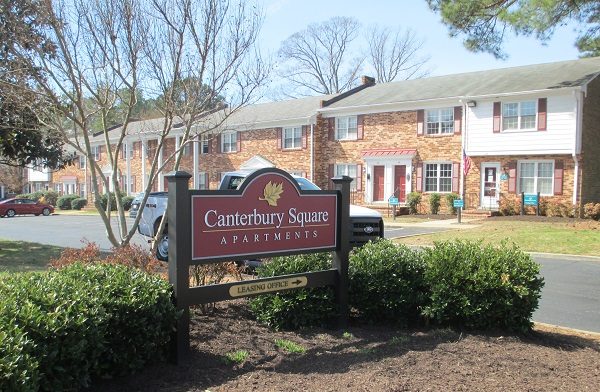 The complex at 900 Pump Road, behind the Canterbury Green retail and office center at Pump and Patterson Avenue. (Photos by Jonathan Spiers)

After striking its first local deal with an acquisition in Ashland, an out-of-town investment team with a taste for apartments has started work on renovations to its second Richmond-area property, which it picked up in an off-market sale last fall.

About $3 million worth of renovations and upgrades are underway at Canterbury Square Apartments, a 219-unit complex in western Henrico County that changed ownership in October in a $24.4 million transaction.

Buddy Wilton is the brother of local developer Hank Wilton, former head of The Wilton Cos., which was formed by their father, Edward Carlton Wilton Sr.

The Wilton family had owned the complex, located near Pump’s intersection with Patterson Avenue, since building it in 1970. County records show Buddy Wilton acquired the property in a split or multiparcel sale totaling $8.9 million in 2003. A recent county assessment valued the property at $18.9 million.

The purchase is the second in the area for Brentwood, which likewise teamed up with UPA to buy the 218-unit Ashland Towne Square apartments last March for $27.25 million. UPA owns four other local properties: the Villas at Midview and Villas at Oakland Chase apartments in Henrico, Brandy Hill Apartments in Mechanicsville, and Delmont Village Apartments in Richmond.

Barry Zolty, a principal with Brentwood Investment Group along with Aaron Steinberg and Sam Walkin, said Canterbury came to their attention while they were assessing the market at the time of the Ashland buy. He said they reached out to Joanne Monday, vice president of Wilton Capital, to negotiate a price for the property, which wasn’t listed for sale.

“We had our eyes on the property,” Zolty said.

As it did with the Ashland deal, Brentwood worked with UPA’s Bernie Grablowsky on the transaction. He said UPA is managing the property.

Zolty said work has started on renovations to unit interiors as leases turn over. The two-story, townhome-style units will be rehabbed with new appliances and counters, and changes to floors, lighting and bathrooms, Zolty said. 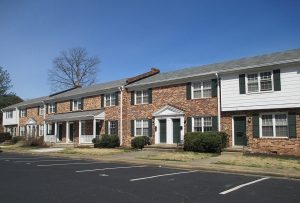 Plans also include replacing the clubhouse with a new structure and fitness center. Other property improvements will include a barbecuing area, and Zolty said fencing has been added behind units to provide privacy and separate backyard spaces.

Zolty said the group was attracted to the property for its proximity to Short Pump and other area shopping districts. He said Brentwood is pursuing other Richmond-area deals to add to its Virginia portfolio, which includes two other properties in Chesapeake and Norfolk.

The purchase adds to other signs of investment in the area of Pump and Patterson. Across the street, the Wilton Cos.-owned Canterbury Service Center site at 10600 Patterson Ave. is being converted to a Dunkin’ location, while the adjacent Canterbury Shopping Center is eyed for renovations.

That’s a great purchase for Brentwood and they picked it up without competing for it. I don’t understand that strategy by the seller but I have to assume they liked the price. That little bit of commission sellers pay can drive the price up millions when investors compete.