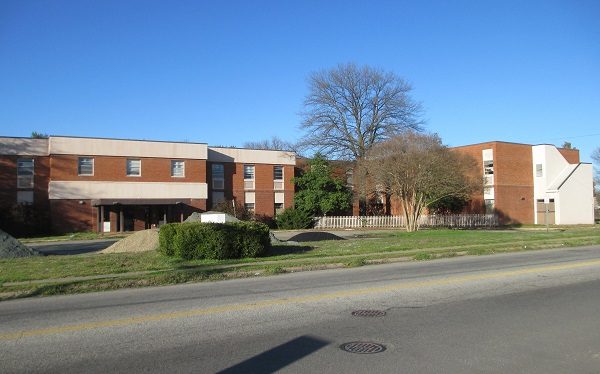 Henrico supervisors this month approved a rezoning and provisional use permit for a 105-unit apartment redevelopment of the former Seven Hills Health Care Center at 1900 Cool Lane and 2011 Mechanicsville Turnpike, just southeast of the turnpike’s interchange with Interstate 64.

Those approvals followed a February action by Richmond City Council to declare the city’s portion of the property as surplus and convey it to the developer, Virginia Supportive Housing, a locally based nonprofit whose other area projects include the New Clay House apartments rehab in the city’s Carver neighborhood.

The nearly 6-acre property consists of two parcels, one located in Richmond and the other in Henrico. The property includes a 105,000-square-foot building that VSH plans to renovate and convert into as many as 105 income-based apartments. Recent city and county assessments valued the property at just over $3 million combined.

A rendering of the planned redevelopment at 1900 Cool Lane. (Courtesy Arnold Design Studio)

Built in 1977 as an age-restricted facility, the building was transferred to the City of Richmond the previous year and most recently housed the nursing home, which was operated by the Hospital Authority of Richmond. The facility closed after losing eligibility for Medicaid and Medicare funding in late 2007, according to news reports at the time.

VSH is planning the apartments as low-income housing, meaning for residents earning 50 percent or less of the area median income, and as permanent supportive housing for formerly homeless adults. Units would include one- and two-bedroom floor plans and range in size from 500 to 950 square feet.

The $30 million project would involve low-income housing tax credits from the Virginia Housing Development Authority, according to a city staff report. A call to VSH Executive Director Allison Bogdanovic was not immediately returned Wednesday afternoon.

VSH is working on the project with Christiansburg-based Arnold Design Studio. Documents filed with the city and the county do not indicate a contractor or other firms assigned to the project. Preston Lloyd with Williams Mullen represented VSH in its applications with both jurisdictions.

The apartments would add to other efforts underway to increase income-based housing options in the Richmond area. About a mile east, the 256-unit Church Hill North development started construction last fall at the site of the old Armstrong High School.