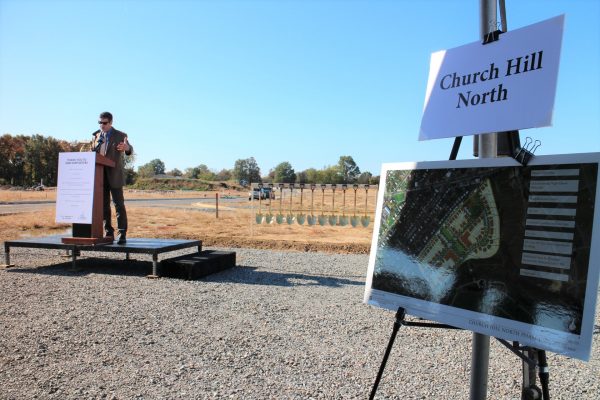 With a local contractor signed on to take the project vertical, a years-in-the-making redevelopment of a former East End high school site into mixed-income housing marked the start of construction with a groundbreaking ceremony Tuesday.

Local dignitaries and supporters converged on the now-cleared site of the old Armstrong High School, where the 256-unit, multiphase Church Hill North development that’s part of a larger revitalization of the nearby Creighton Court and surrounding area will take shape.

Tuesday’s ceremonial shovel-digging, which came nearly two years to the day of a similar ceremony that signaled the start of demolition and site work for the project, marked the start of the first two of five phases that would complete Church Hill North over the next three years.

Local construction firm KBS is signed on as the general contractor, winning a bid put out last year by The Community Builders, the Boston-based nonprofit co-developing the project with the Richmond Redevelopment and Housing Authority.

The public-private project is part of more than $100 million in improvements planned for the 22-acre site along North 31st Street and the 30-acre Creighton Court revitalization, which calls for the one-for-one replacement of the public housing complex’s 504 units and the addition of up to 1,000 market-rate homes targeted to lower-income residents. 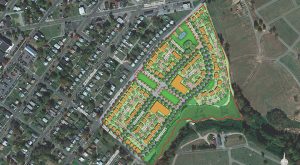 A site plan of the 22-acre Church Hill North development, which aims to provide a variety of housing and ample recreational space for mixed-income and senior residents. (Submitted)

The first phase of Church Hill North, foundations for which have begun to be laid, consists of 105 income-based apartments for seniors and other residents with a mix of incomes, along with green space and recreational areas. Those units, at a cost of $26 million, are scheduled to be finished and ready for occupancy by late 2019.

The second phase, scheduled to start in early 2019, would add another 70 rental units at a cost of $17.6 million, along with additional senior housing totaling about $11.5 million. Those homes are to be finished in 2020, with the remaining three phases of both rental homes and about 35 single-family detached houses for purchase slated for completion in 2021.

In addition to the residences, Church Hill North is planned to include a 20,000-square-foot community center and a memorial garden. An additional 1.2 acres would be reserved for open space and playgrounds.

Other firms involved in the project include locally based Timmons Group, which is handling engineering, and Maryland-based architecture firm Torti Gallas and Partners. SL Nusbaum Realty Co. will handle property management, and The Community Builders is working with Better Housing Coalition on the single-family homes for purchase. 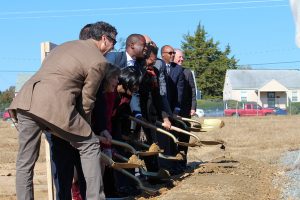 Tuesday’s groundbreaking marked the start of a multiphase construction process that would complete Church Hill North over the next three years. (Jonathan Spiers)

Construction was previously scheduled to start in mid-2017, with the first three phases to be completed by now. Robert Fossi, regional vice president of development for The Community Builders, said financing challenges contributed to the delay, which also included a longer-than-anticipated demolition process.

“It’s typical in projects like this that it takes a little longer than people hope, but when you’re underway, you’re underway,” Fossi said. “We’re starting now, and we’re delighted to be doing so.”

Pennsylvania-based contractor Safeco Environmental handled demolition and asbestos abatement, a process initially expected to last three or four months but ended up lasting a year, wrapping up in August.

Funding for the project involves a mix of city, state and federal sources, including tax credits and other funding from the Virginia Housing Development Authority. Others involved include RBC Capital Markets, Chase Bank, BB&T and Federal Home Loan Bank of Atlanta.

Richmond Mayor Levar Stoney, who joined Fossi and others in providing remarks during the ceremony, said city funding leveraged state and federal sources from VHDA, the U.S. Department of Housing and Urban Development, as well as private debt and equity. 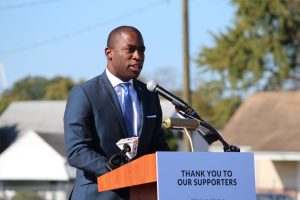 “For many years, we have seen Church Hill start to become a very mixed and diverse-income community,” Stoney said. “The Church Hill North project will ensure that critical mass of housing units will remain affordable as the overall area continues to grow and flourish.”

Stoney mentioned other projects that are adding income-based housing in the city, noting the recent groundbreaking for Jackson Place, the $32 million mixed-use development underway in Jackson Ward — a collaboration of RRHA and Washington, D.C.-based Community and Preservation Development Corp.

Along with Church Hill North, Stoney said such projects are contributing to his administration’s goal of building 1,500 income-based units in Richmond by 2023.

Other speakers noted additional projects that are adding to the nearby Nine Mile Road commercial corridor. Among them, construction is well underway on the similarly named Church Hill North Retail Center, a mixed-use complex at Nine Mile’s convergence with North 25th Street and Fairmount Avenue that will include a grocery store, culinary school, apartments and retail space.