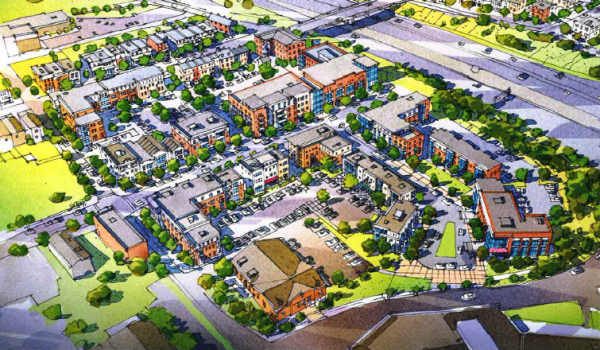 A conceptual rendering of the development envisioned for the two blocks near each other in Jackson Ward. (Courtesy of RRHA)

As construction starts on a mixed-use, mixed-income development set to fill a city block in Jackson Ward, groundwork is being laid for a supplemental project that would fill another largely vacant block across the street and also could bring a hotel to the neighborhood.

Site work has started on Jackson Place, a $32 million undertaking by the Richmond Redevelopment and Housing Authority and Washington, D.C.-based Community Preservation and Development Corp. The project will add apartments, commercial space and parking to the city block bordered by First and Second streets, and Duval and Jackson streets.

Across Second Street, RRHA is seeking a rezoning for a comparable project to Jackson Place, which would fill 3.4 acres in the block bordered by Second and Third streets between Jackson Street and Interstate 64-95. That second development would involve additional mixed-use buildings with housing above commercial space and a hotel with 100 to 115 rooms. 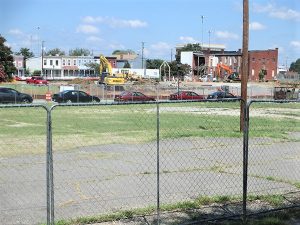 The second city block slated for rezoning gated off for a comparable project to Jackson Place, which is across the street. (Jonathan Spiers)

The city planning commission endorsed the rezoning at its regular meeting Monday, and City Council is scheduled to consider the request at its Sept. 10 meeting.

If approved, RRHA then would put out a request for proposals to secure a developer for the second project, said Marcia Davis, the authority’s chief real estate officer. She said the goal is to time that process within the 18-month construction schedule for Jackson Place, which started in July.

“Our hope was to get underway fairly quickly, so that construction was right on the cusp of what is happening between First and Second so it minimized disruption to the neighborhood,” Davis said. “We didn’t want four years of construction going on.”

Davis said details for the second development remain in the works and a cost estimate has yet to be determined for the project, which RRHA has been working on with Pittsburgh-based Urban Design Associates. She said RRHA is aiming to issue the RFP this fall, pending zoning approval.

While CPDC already is working with the authority on Jackson Place and another project – a planned conversion of the former Baker School building across the interstate into 48 senior apartments – CPDC’s Matt Engel said it is not yet involved in the second Jackson Ward block project. The two groups (CPDC, RRHA) likewise collaborated on the $11.4 million conversion of the old Highland Park Public School into senior apartments.

Where CPDC led the rezoning for the first Jackson Place block after entering into a development agreement with RRHA, this latest rezoning is being led by the authority and fellow property owner Club 533, a private club located on the southeast corner of the block. Hirschler Fleischer attorney Brian Jackson is representing the joint applicants in the rezoning process.

Engel said CPDC would be interested in responding to the RFP, but said the hotel component could take it out of contention.

“Given that we’re primarily an affordable-housing developer, it’s out of our bailiwick,” Engel said. “We have a good relationship with them. I think if there was a piece that fit our development profile, we would pursue it.” 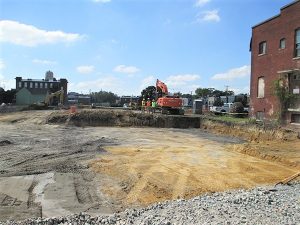 In the meantime, CPDC is pushing forward with Jackson Place, which is approved for three-story buildings totaling 154 apartments, 72 of which are designated for replacement housing for residents of RRHA’s Frederick A. Fay Towers, near Gilpin Court across the interstate.

Along with the Baker School and Highland Park Public School conversions, the three RRHA-CPDC projects are planned to relocate a total of 200 residents from Fay Towers, which is being eyed for redevelopment.

The remaining 82 units of Jackson Place will consist of studios and one- and two-bedroom apartments that would be a mix of income-based housing and market-rate rentals. The 2.5-acre development also will include 6,000 square feet of commercial space and 71 on-site parking spaces.

Columbia, Maryland-based Harkins Builders signed on as the contractor. The architect is Maryland-based Grimm and Parker, which also worked with CPDC on the Highland Park Senior Apartments.

Those properties – 700 and 706 N. Second St., and 110 E. Jackson St. – recently sold for $1.4 million to 700 N 2nd Street LLC, which is tied to an entity registered with the State Corporation Commission by Robert Edward Lee Wilson VI.

The LLC was represented in the deal by One South Commercial’s Ann Schweitzer Riley, who did not return a call seeking comment Thursday afternoon. One South’s Tom Rosman and Lory Markham represented the seller, 700 Jackson Street LLC.

This is wonderful! May it actually happen as shown in the conceptual and this section of Jackson Ward be completed in a timely manner. These eye sores which date back to the construction of the Turnpike and the destruction of this once beautiful neighborhood will finally be made whole again.

RRHA is leading the rezoning and has not yet put out the RFP. It will be 4-6 years before any construction is started so I would worry about 4 years of continued construction. This idea of a hotel has been floated since late 1990s and every time the land goes out for development the project fails. A new hotel in the Bottom, new one by the Convention Center/Coliseum, and Charles still talking about a hotel. I just think they need to stay with retail with residential over it and drop the hotel idea for this site.

per the article the first phase is underway. I agree with you that it would be a mistake to attempt to force a hotel to the site, but the rezoning should be flexible enough to allow it and other uses to fit the marketplace.