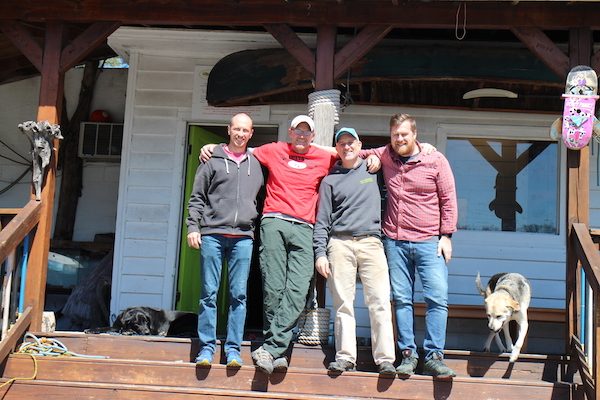 As spring and river season set in, a local outdoor recreation company is bringing in some new owners and adding to its offerings.

Andy Thompson and Ryan Abrahamsen are purchasing a minority stake in Riverside Outfitters, a Forest Hill-based business that offers guided raft, kayak and paddleboard excursions down the James River, as well as youth camps, equipment rentals and firewood sales.

Scott Turner founded the company in 2005. Matt Perry joined the ownership group two years later and has been handling operations since. Turner now owns and runs Truetimber Arborists, but retains his stake in Riverside. 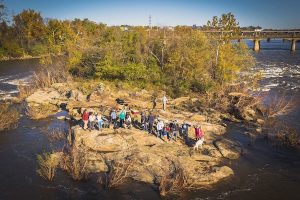 Thompson and the rest of the new owners on Sharp’s Island. (Courtesy Creative Dog Media)

Riverside will renovate its headquarters at 6834 Old Westham Road, add tubing to its offerings, develop new youth camps and add more satellite locations in the region.

The deal will close March 31. Terms were not disclosed. Perry and Turner each own one-third of the company, with Thompson and Abrahamsen combining for the remaining third.

Perry said the roots of the deal started growing in 2018, when he, Thompson and Abrahamsen started a podcast, “Views From The Treehouse,” where they talk to guests about all things local and outdoors.

Eventually they began talking about the future of Riverside Outfitters.

“I kind of had a come-to-Jesus moment with myself, where after talking to Ryan and Andy over the past year, it dawned on me that we should do something about it,” Perry said.

Perry said bringing in Thompson and Abrahamsen will help Riverside keep up with the array of new entertainment options in Richmond such as bowling alleys, bar arcades and shuffleboard bars.

“It’s getting really competitive, and that’s great. All four of us, we live here and play here, and we’re stoked to have that kind of growth, but didn’t want (Riverside) to be left behind,” Perry said. “I knew we needed to grow, Andy and Ryan are our ticket to do that.”

Among the new additions will be a tubing shuttle service that will drop people off at one end of the river and allow them to float down to the other end, where Riverside will pick them up.

“We think we have a way to do it responsibly. It’ll probably be the least expensive offering we have,” he said. “It’s something Richmond doesn’t really have right now. There’s no easy way to get out there and tube, so we’re going to try to solve that.”

Renovations are underway at Riverside’s headquarters, and the company is working on redoing its website. 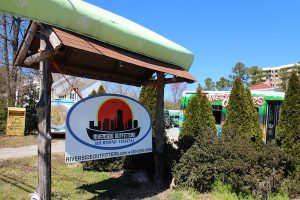 Riverside Outfitters’ headquarters in Forest Hill is being renovated.

Riverside has a fleet of 10 decorated school buses that it uses for its guided tours, as well as a converted shipping container it uses as an outpost for walk-up customers at Brown’s Island seasonally.

Perry said they’re pulling back on their presence on Brown’s Island, as they have friends who are working on a similar concept in that area, but added they’re looking to add other river outposts in Goochland and at Rocketts Landing.

“The outpost is for all rentals, like stand-up paddleboards and kayaks,” Perry said. “The idea is, instead of having people be encouraged to go to Brown’s Island and look at the river, why not encourage people to get out on it and use it?”

Riverside has four full-time staffers and hires up to 60 workers during peak seasons.

Total dream team! Good luck with the partnership and future growth. The Richmond community & visitors need to experience what Riverside Outfitters has to offer!

Scott Turner is a great entrepreneur, father, husband, family man and all around great person. I wish you continued success

Congratulations to Riverside, a great organization. In terms of the tubing, thank you for giving careful thought to the impact on the river and other users. Industrial scale tubing has had many negative impacts on the Howardsville to Scottsville section of the James.