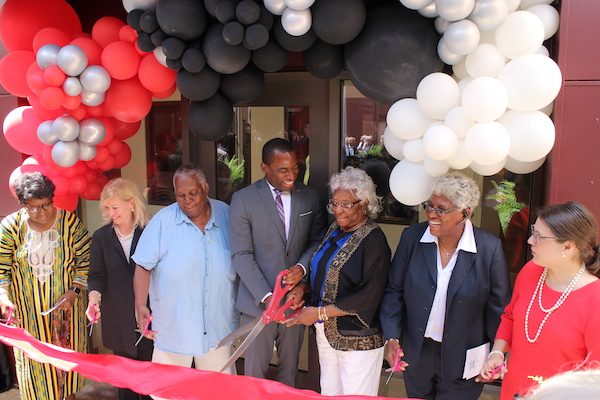 Mayor Stoney, members of the Stallings family, VSH dignitaries and residents cut the ribbon on the new facility. (Photos by Mike Platania)

With a $19 million expansion and renovation now complete, a local nonprofit has nearly doubled the capacity of its apartment house for homeless people in the Carver neighborhood.

Virginia Supportive Housing, which offers housing and support services such as counseling and skills training, last week cut the ribbon on its New Clay House, an apartment building at 707 N. Harrison St., at its intersection with Clay Street.

The project expanded the number of apartment units at the property from 47 to 80. Half of the project involved a gutting and expansion of the 124-year-old building that VSH has used as apartments for nearly 30 years. The other half involved building from scratch on a neighboring parcel that the nonprofit bought in 2016. 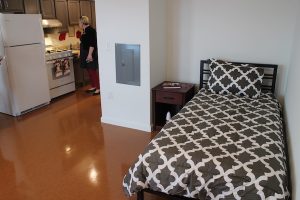 The studio apartments in the house were expanded and renovated.

The project expanded the size of the property’s studio apartments from 150 to 350 square feet, with each getting its own bathroom and kitchenette, which previously were shared.

The apartments are available to those earning 50 percent or less of the area median income. Residents sign a lease to pay one-third of their future income, or a minimum of $50 per month, on rent.

VSH had 25 funding sources for the project such as historic tax credits, city grants, bank loans, grants from foundations and private donations, including a $1 million anonymous gift.

Among those in attendance at last week’s ribbon cutting were Mayor Levar Stoney, VSH executive director Allison Bogdanovic and Wanda Stallings, the daughter of the late James Russell Stallings Sr., who previously owned the building and opened it to the nonprofit in the 1990s. 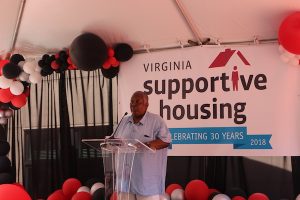 Robert Clark, a resident of the house, also was there. He said he moved to Richmond from New York in 2013 and wound up homeless.

“I’d never been homeless in my life. I couldn’t trust anybody here, and I went through the wringer,” Clark said. He eventually made it to the New Clay House.

“The other thing that people don’t understand is in a community like this here, they became my family. We cook food together, we do things together. So now I do have family here in Virginia- – it’s the residents here,” Clark said. 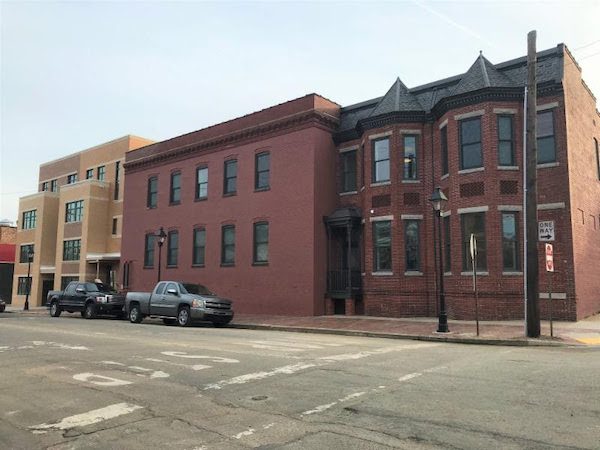 The City non-profits are taking steps to provide housing opportunities for the homeless. a minority of these homeless originate in the City; many of these clients come to the city from the surrounding suburbs. They come on buses and on the rails. What are the Counties doing to house their homeless within their own jurisdictions?

@ Bruce – I share your concern, if City funds are involved. It is one of the many reasons the City should not be in the housing business: law of supply and demand –if you build it, they will come.

A large majority of the homeless population in the metro area do in fact stay in the city. That’s where the shelters are located. But the $6 million federal and state funding that aids these shelters is also based on these populations. So, in effect, some of the funding is in fact directed to where it needs to be. Of the 662 homeless counted in a January 2017 survey, the nonn-sheltered total was 152. 122 were in RVA. 30 in Chesterfield, Henrico and Hanover combined. It seems to make sense that a groups as small as this would be better… Read more »

Virginia Supportive Housing recently rezoned a property in Henrico County for a similar facility. So that is one thing Henrico is doing.

Both of these comments are quite disturbing. Does it really matter where they are coming from? Rich and poor alike migrate to the City. This is a common migrational trend in the US. We now have more people living in cities than outside of cities. Cities tend to be economic hubs, offering mass transit and easier access without priveledged goods like personal cars. “If you build it, they will come?” – Steve Richmond. Really?!? When you build, there is also a burden of responsibility, period. Unintended consequences are real too. A thriving community, business, ecosystem, etc exist through connection and… Read more »

@Ashley – I stand by “if you build it, they will come.” But I do see the harshness in my statement. To the extent that it reads, “I don’t want those darn poor people coming,” you have a valid point. But that was not what I meant. What I am saying is that if City taxpayer money is used, then, surprise surprise — outside folks will come to seek the benefit of City taxpayer largesse. I, too, am a City taxpayer. If you want to be generous to others (as I do) then donate according to your ability and preferences… Read more »

What a fantastic project. Virginia Supportive Housing continues to meet a critical need in our community. Kudo to their forward-thinking board for orchestrating this expansion and for the community partners for helping with the funding. More please!

There are a lot of homeless folks on our streets. Housing is the first step. I bet that treatment for alcohol and drug addiction, as well as improved mental health services would go a long way towards reducing the number of panhandlers sitting on street corners.