One of the city’s oldest tattoo shops has new digs right next door to where its owner once was an apprentice nearly three decades ago.

Absolute Art Tattoo recently moved into the former Adams Barber Shop at 821 W. Broad St., having left its original home at 917 W. Grace St., where it had opened in 1993.

By random chance, the new space is next to the storefront at 823 W. Broad St. that previously housed Way Cool Tattoos. That’s where Absolute Art owner Jason Hobbie learned the business. 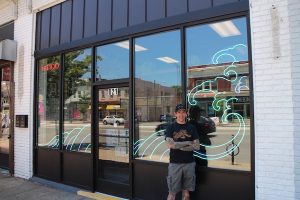 Hobbie moved to Richmond from Roanoke around 1990, telling his parents he planned eventually to go to art school.

“I think I used going to college as a way to keep my parents from completely losing their minds without telling them I wanted to be a tattooer,” Hobbie said.

The then-19-year-old had been an apprentice for a year at Way Cool when, in 1991, its owner told the staff he was going to move the shop to Toronto. Hobbie said Richmond had few tattoo shops at the time, and those that were around were biker-run and not keen on letting in newbies.

“It wasn’t like you could go to another shop and say, ‘We’re closing; can I work here?’” he said. “They’d rather have you go out of business.”

With Way Cool’s relocation pending, Hobbie asked coworkers at Way Cool about opening a shop of their own.

“They looked at me like I was insane. They were like, ‘I don’t want to own a business, I just want to be a tattooer,’” he said.

Hobbie’s mother nudged him to take matters into his own hands, suggesting he open a shop.

“I was like, ‘Mom, that’s not how that works. I’m the apprentice, I can’t just be the owner,’” he said, laughing. She assured him he didn’t necessarily need to be the boss — he just needed to run the business and keep learning how to tattoo. Hobbie, with an attitude that he had nothing to lose, took his mom’s advice. He started looking for his own spot and eventually saw a for-rent sign in a small space at 917 W. Grace St., above what was then Bidder’s Suite restaurant. The downstairs space is now home to Ipanema Cafe.

He leased it and kicked off 26 years in business on West Grace Street.

“I never looked at it as owning a business. I just saw it as not wanting my apprenticeship to end, because I was learning and doing what I was dreaming of doing,” Hobbie said. In 2009, he opened a second shop, Classic Tattoo, at 3121 W. Marshall St. in Scott’s Addition. 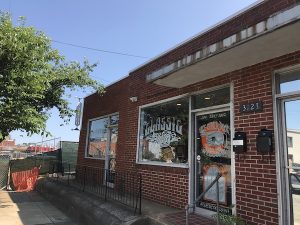 After years of renting on Grace Street, Hobbie said he began thinking about buying the building in the early 2000s, but a deal never materialized.

Then last fall, the building was sold to Zac Frederick’s Crescent Preservation & Development Co. Hobbie said he was a little heartbroken at first.

“I’d always seen myself buying it someday,” he said. “But the new owners and management of building were super standup and class-act guys. My lease was up in May of this year, and they offered to ride the lease or go month to month.”

Hobbie told Frederick he was instead looking to buy, so he began looking for space. He reached out to his friend and real estate agent Baker Ellett of Blue Dog Properties, who mentioned he heard about an old barber shop on Broad Street that might’ve been available.

Adams Barber Shop was on its way out, as its owner, Howard Adams, retired last year after running the business since the late 1950s. He handed the business over to new owners, who since have relocated to 721 W. Broad St.

Hobbie and his Absolute Art crew knew Adams well, as they often walked over from Grace Street to get their haircut. Adams cut Hobbie’s hair on his wedding day and Hobbie even went to a retirement party for Adams last year.

The building was initially under contract when Hobbie first heard about it, but then he got his chance when the deal fell through. He bought the building, which has apartments above it, in November for $700,000 and began renovating it into Absolute Art’s new home.

Absolute Art moved into the new space in early May, 28 years after Hobbie got his start next door.

“I’ll be honest: To end up back where I first started and to think this is where I’ll be when I retire from this crazy job is pretty wild,” Hobbie said. “I’m super proud of how much work the guys I work with have done to make the place amazing. If you knew Mr. Adams at one point, come check it out.”

Howard Adams is not fully retired. He still cuts hair Thursdays and Fridays from 5:30am til 6pm around the back of the old Rockitz.

Great story! I’ve got to get some new ink, and always heard about Absolute Art. Guess I know where I’m going next!

Big Congratz to Jason!!! – One of the nicest guys you’d ever wanna meet.