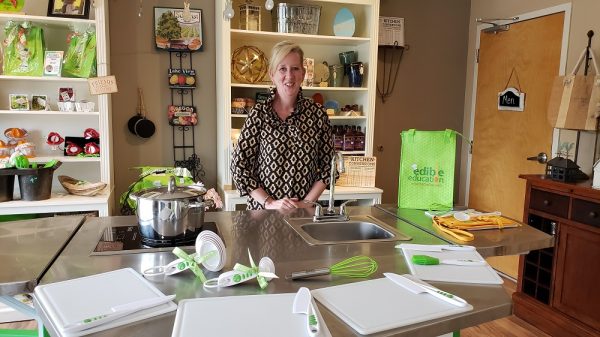 Ann Butler with one of her kitchen carts. Two of her carts will be coming to the Short Pump Town Center starting June 22. (Josh Cozine)

Edible Education, which teaches kids how to cook with the help of small patent-pending kitchens on wheels, has finalized plans for a 2 ½-month lease in Short Pump Town Center.

Ann Butler, founder and CEO, said the point of the temporary expansion into the mall was two-fold: to serve more kids over the summer, and to test how well the business can run out of a mall for possible future expansions.

“It’s really a scalability test,” said Butler, a former Chesterfield County Public Schools teacher, noting that if the classes and camps work well enough at Short Pump, then the potential exists to expand into malls anywhere.

Signups for the summer camp programs opened up during the holidays last year and Butler said enrollment started quickly.

“We could tell in February from our numbers here that we were ahead enrollment-wise,” she said. “So I called up the mall, because you hear about these pop-up stores all the time. At first they said they didn’t have space, but a couple weeks later they called back with an opening.”

Edible Education is leasing a 1,800-square-foot space in the mall — previously occupied by now-closed clothing and accessory shop Lily Rain — where it will fit two of its mobile carts.

The carts, operating under the brand “Kitchen a la Cart,” come equipped with just about everything you’d expect to find in a kitchen, including a sink, convection oven and an induction-heated stovetop. Measuring just 55-by-31 inches, counter space also can be folded up to make room for up to eight workstations or cutting boards. They come mostly self-contained, the only other thing needed being a boxed cooler to hold the food and cooking utensils, and two electrical outlets to power it.

The Short Pump lease runs from June 15 through Aug. 30, with the grand opening planned for June 22 when a “make-and-take” food day will be held where people can come in, cook at the stations and take home their creations. Classes for kids will begin the following Monday, June 24. With her rent priced at $1,980 a month for the mall space, Butler said the number of signups for classes and camps already has exceeded her break-even point.

In its eighth year running camps and selling the carts for wholesale at $9,995 each, Butler said the company is doing well. It has sold more than 130 carts around the country and last year launched an affiliate in northern California.

On the ground locally, it sold a cart to the Richmond Public School Nutrition Service to be used in the newly renamed Barack Obama Elementary School in Northside, as well as another to VCU.

Butler said growth of the bottom line isn’t the main reason she does all this.

“The real reason why we do this is to give (kids) a skill set for life. We empower kids, and food is the tool,” she said.

I’m so happy for you, Ann! You are doing wonderful things for kids by teaching them this life skill!! THANK YOU!

This is terrific!
Could this also work in lieu of a regular kitchen?
Perhaps in a studio-type apartment?