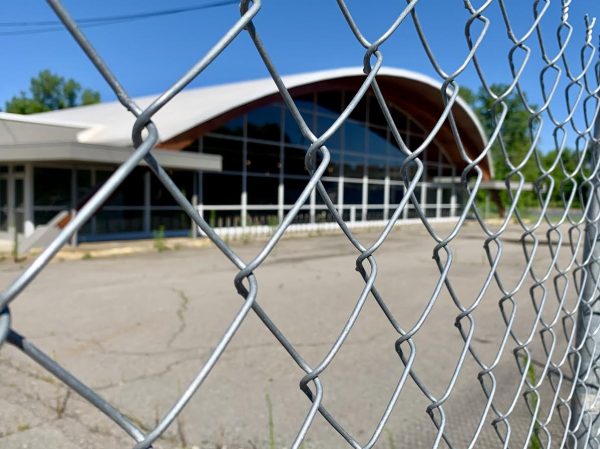 The former Siegel’s Supermarket at 2005 Hull St. is part of a 17-parcel portfolio of proprieties Laura Dyer Hild is having rezoned to be sold to accommodate residential and commercial uses. (Photos by J. Elias O’Neal)

One of the biggest landlords on the city’s Southside is taking another step toward positioning a grouping of its properties – including the former Siegel’s Supermarket site – for potential redevelopment.

Laura Dyer Hild, who with husband Michael Hild runs real estate firm Church Hill Ventures, is seeking to rezone 17 properties in the Swansboro neighborhood to accommodate mixed-use residential and commercial development through the city’s TOD-1 and B-7 zoning designations.

The sites, which total about 4.3 acres, are currently zoned to accommodate either light industrial or general business, allowing for uses such as small retail and auto service centers.

All the properties, which include the former Siegel’s building and surrounding 2.4-acre property at 2005 Hull St., are assembled over a two-block stretch bounded by West 21st, West 19th, Bainbridge and Hull streets.

The Hilds purchased the Siegel’s site about two years ago for $630,000, stating at the time their plans to renovate the space into a mixed-use commercial market featuring retired Richmond brands such as Valentine’s Meat Juice and drinks from the former Climax Beverage Co. 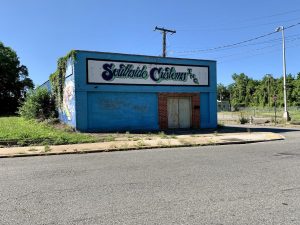 The graffiti-tagged one-story building at 1922 Bainbridge St. is part of a 17-parcel portfolio Laura Hild is having rezoned to be sold in Swansboro.

With the exception of the Siegel’s property, which Church Hill Ventures owns, the remaining 16 parcels are owned by business entities tied solely to Laura Dyer Hild, according to property records.

She paid about $1.2 million for the 16 parcels, according to city real estate records.

The supermarket building, known for its arched marina barrel roof, was put up for sale late last year along with the surrounding 16 parcels for a combined asking price of $12.5 million, according to a Cushman & Wakefield | Thalhimer marketing flier.

TOD-1, or “transit-oriented nodal district,” allows for taller, midrise development of up to 12 stories to occur. It also reduces parking requirements, with the goal of restricting surface parking lots and allowing parking facilities to be market-driven.

The B-7 mixed-use business district zoning allows for a mix of residential and commercial uses.

Developers have targeted the zoning designations since the city adopted them about two years ago, helping to give rise to several midrise residential buildings in Scott’s Addition and Jackson Ward. 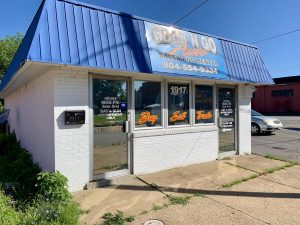 The former Grab-N-Go Auto Sales and Rentals is no more, but the site is part of a 17-parcel portfolio Laura Hild is having rezoned to be sold in Swansboro.

The city’s planning division currently is reviewing Hild’s request for rezoning the properties.

No development plans have been submitted for the sites, according to the city’s online planning portal.

Hild could not be reached for comment Thursday afternoon.

As one of the early investors in the Manchester, Swansboro and Blackwell neighborhoods, Church Hill Ventures has been on a tear for five years, either renovating several derelict buildings in the neighborhood into trendy cafes and apartments, or more recently, selling some of those assets.

Aside from the properties around the Siegel site in Swansboro, the couple also listed about half of their property holdings in Manchester and Blackwell. Most of those 14 parcels are vacant lots along prominent corridors, such as Hull and Bainbridge streets, in the neighborhoods, while some include structures that potentially could be renovated or razed for new construction.

Most of the parcels up for grabs are vacant lots along prominent corridors, such as Hull and Bainbridge streets, in the neighborhoods, while some include structures that potentially could be renovated or razed for new construction.

Hild’s rezoning case and the potential sale of the Swansboro sites comes as her husband and his now-defunct company mortgage Live Well Financial are under fire from creditors after its abrupt closure last month.

Three sizable financial firms are seeking to force the company into bankruptcy to recoup nearly $130 million owed to them. One of those creditors, Flagstar Bank, also has sued Michael Hild directly, claiming he personally guaranteed loans made to Live Well.

It’s unclear whether any of the couple’s Southside real estate holdings could be at risk because of Live Well’s troubles.

I really don’t think it’s worth it to report on any upcoming plans by the Hilds until they’re done. They seem to be all ideas and no follow-through. No matter what this article says, it’ll all be moot once they get distracted by something else.

Yeah Dustin, I would venture to add that I bet that no sale will occur as the financial entities suing Live Well will prevent any sale property owned by either party until proof can be given that none of the missing proceeds from the mortgage business (that is now being forced into bankruptcy and sued for everything by almost everyone) were not used to prop up the sinking real estate company. And for the record what transit-oriented node is planned for 20th Street between Bainbridge and Hull Street?

Michael:
Can you fill in a little bit more about ” proceeds from the mortgage business” “used to prop up the sinking real estate company. ” How much was lost by the real estate company, do you think they lslt enough to sink it, and was there some sort of event like a balloon payment due?

I am not sure; more will come out as the Feds investigate. US Attorney acquaintance said may turn into a virtual pyramid scheme for LiveWell. I bet based on the comments in article about payments to Hild he should not have receive were used for his real estate investments.

I wonder if it will end up as bad as French disaster. https://www.richmond.com/business/plus/chesterfield-based-live-well-financial-under-federal-investigation-according-to/article_9b46da85-7ce6-5880-8888-bd3853c38a57.html

Well, how do you lose money writing reverse mortgages and investing in Manchester real estate?
I suppose we will find out soon.
Unintended consequence is that this will slow down Manchester growth, but that might help “Scotts Addition 2.0”.
BTW, “SA 2.0” needs a better name.

I believe the County calls it Westwood. It is everyone here that is calling it SA 2.0.

Thanks for your answer!

Acca is a better name.