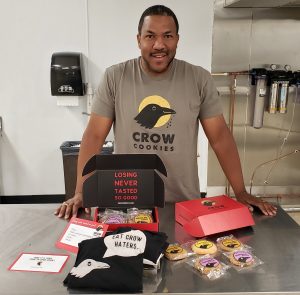 Johnathon Mayo with a freshly boxed batch of Crow Cookies at his space in Hatch Kitchen. (Photos by Josh Cozine)

Johnathon Mayo’s latest local entrepreneurial endeavor was born alongside his second daughter, after his wife’s doctor gave the couple a prognosis they disagreed with – and was ultimately proven to be wrong.

Mayo last month launched Crow Cookies, which serves up comically named cookies such as “chocolate chump,” “gloatmeal raisin” and “sore loser lemon.” The cookies come with a note addressed “hey loser” and tell the cookie recipients that they can eat crow, an idiom that means being humiliated for being wrong.

The idea is to help customers take a friendly jab at someone who was wrong — or even who just roots for the wrong sports team — and then soften the blow with cookies, which come boxed with the default “eat crow” message or with a personalized message.

That prank-like theme was inspired in part by a doula that helped Mayo and his wife bring their second daughter into the world.

Their first daughter was born via Cesarean section, and the couple was told any following births would have to be done the same way. They disagreed – and then enlisted the help of doula Emily Bruno, who told the couple it was still possible to have a natural birth and worked with them throughout their next pregnancy. 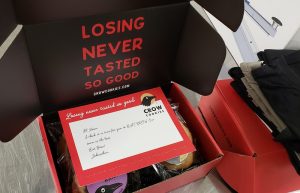 “Hi Loser, I think it’s time for you to eat crow.” Boxes of Crow Cookies come with prepared message or with a custom personalized message.

Bruno at the time jokingly told the new parents of two about an idea that she had for her clients wanting natural births after a C-section.

“During that time we were at the hospital, she shared with my wife that she had this idea for her VBAC (vaginal birth after Cesarean) clients as a way to tell the doctors that told them that they couldn’t have a natural birth to ‘eat crow’ and send them a batch of crow cookies,” Mayo said.

“Emily came to the house the next day for a follow-up visit, and I said, ‘Emily, tell me about this whole crow cookie idea,’” Mayo said.

The two then partnered up and started working on the concept, with Mayo eventually taking over the idea with Bruno’s blessing. Now, two years later, the business is starting to make its first sales, debuting recently at Broad Appétit, where it sold over 700 cookies. 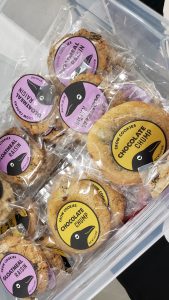 Mayo bakes the cookies himself out of Hatch Kitchen, a commercial kitchen on Maury Street in the city’s Southside, and sells them online. The recipe comes from Morgan Botwinick, owner of Whisk Bakery in Shockoe Bottom and Scoop ice cream shop in the Fan.

Crow Cookies is the fourth business venture for Mayo, a self–proclaimed serial entrepreneur. He is also a part-owner of Mama J’s Kitchen in Jackson Ward, online fundraising platform Serving Up Change, and Team Excel, a nonprofit that matches students with professional athletes who act as coaches to help with grades and school attendance.

Since his Broad Appétit opening, Mayo said he has sold around 15 orders for boxes of eight cookies. He’s operating on a bake-to-order basis for now and hopes to start selling more cookies soon, looking into possibly selling them at local farmer’s markets and other local events such as the Watermelon Festival.

It’s all about taste. Will these cookies be something to crow about?

What a cool (and great) idea! – Best wishes, Johnathan – Oh, and here’s the website I found (since it wasn’t included in the story): https://www.crowcookies.com/