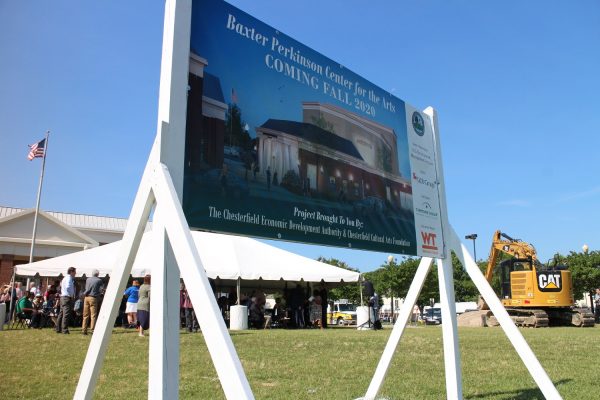 The ceremony was held on the site of the future arts center beside Chester Library. (Photos by Jonathan Spiers)

Correction: An earlier version of this story misidentified Chesterfield Cultural Arts Foundation Chairman Hugh Cline. He is a retired Chesterfield businessman, not the local chiropractor with the same first and last name.

A decades-long effort to establish a cultural arts center for Chesterfield County reached a milestone Monday with a groundbreaking ceremony to kick off construction.

Dozens of community leaders and project supporters gathered at the site of the future Baxter Perkinson Center for the Arts, a 23,350-square-foot facility to be built on land on beside the Chester library along Centre Street and Fountain Square Plaza in the Chester Village Green mixed-use development.

The $16.9 million center will include a 352-seat theater, an art gallery, classroom, multipurpose room and performance patio. Construction will include 117 new parking spaces and is scheduled for completion in fall 2020. Site work is currently underway. 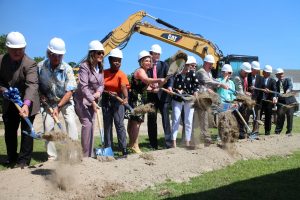 Dignitaries shovel dirt to signal the start of construction.

The center has been in the making since the 1980s, when it was conceived as a permanent home for the John Rolfe Players, a troupe led by Dottie and Larry Armstrong. With support from the late Elizabeth “Betty” Matthews, a Chester civic leader who died in December, the effort gained momentum with the creation of the Chesterfield Cultural Arts Foundation, which will manage the center.

Named for William Baxter Perkinson Sr., a Matoaca resident and real estate investor who died in 2011, the facility was funded in large part through donations, including a $1 million naming gift by Perkinson’s son, W. Baxter Perkinson Jr., and his wife Elaine.

The couple has made similar donations to Trinity Episcopal School to help fund and its Perkinson Arts Center and renovate its theater. Perkinson Jr., an area dentist, founded Virginia Family Dentistry, a practice that includes his son, S. Tyler Perkinson.

Another naming gift came from Donna Dean Stevens and her husband Jayson “Jay” Stevens, who donated $350,000 in honor of her late husband, country music singer Jimmy Dean, whose name will grace the center’s theater.

Other support came from Hugh Cline, a retired Chesterfield businessman who chairs the arts foundation and led a fundraising drive to raise the matching funds required for the project, which county voters included in a 2004 bond referendum. The fundraising effort lost traction during the economic downturn several years later, but Cline’s involvement starting in 2012 regained momentum, raising $1.1 million in a six- month span, according to a county release about the project. 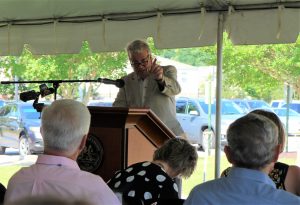 County supervisors approved additional funding in recent years for the project, which also included support from the Chesterfield Economic Development Authority. Bruce Miller, a founding producer of Virginia Repertory Theatre, has been enlisted to serve as the center’s executive director.

Acknowledging the effort in getting to this point, County Administrator Joe Casey took the opportunity Monday to wax poetic about the project.

“Since we’re building an arts center, I should do a nice Shakespearean quote,” Casey said in prefacing his remarks. “It just seems like it’s a ‘To be, or not to be, that is the question.’ The answer is, ‘To be.’ Congratulations to all who have been a part of it.” 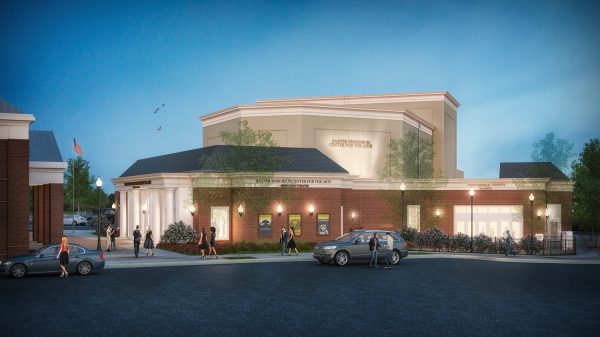 A rendering of the arts center designed by DLR Group. (Chesterfield County)

As an architect and resident of Chesterfield County, it is embarrassing that we can do no better. The design and construction of a “Center for the Arts” is a significant statement of a communities commitment to the creative and unique nature of the performances within. This design is horribly off target and misses the entire point of the celebration of the Arts. While the noteworthy contributions of those wishing to provide the County with such a wonderful gathering place is commendable and much appreciated, the work of the architects and the planners falls flat. Is this really the best we… Read more »

Just a thumbs up won’t do here. I agree completely with Robert’s sentiment and I really hope they reconsider what message(or lack there of) this sends as a “Center for the Arts.”

Agree completely with Robert Steele. And I am amazed that a firm from Nebraska would be asked to design a small arts center in central Virginia. There are a handful of strongly talented architects right here in Richmond – any of whom would have done significantly better than this.

That building looks exactly like the CVS I go to and get my little blue pills because how else would I get excited about that architecture.