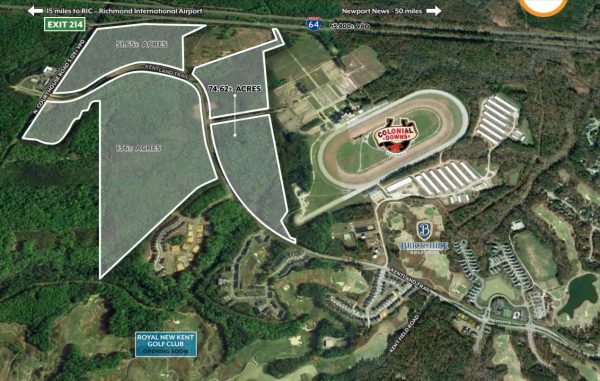 As horse racing’s return to Colonial Downs enters the home stretch, hundreds of acres beside the New Kent County track that have been eyed as a prime economic development site are now in the hands of a new owner with a track record of buying up land for conservation.

The purchase was made through an LLC called Criss Cross Properties, which shares an address with J.B. Poindexter & Co., the businessman’s Houston-based manufacturing conglomerate.

Poindexter was represented in the deal by Cushman & Wakefield | Thalhimer agent Richard Thalhimer, who was on vacation and unavailable for comment. Attempts to reach Poindexter for comment were not successful.

Austin Newman, a local broker who listed the land for Colonial Holdings in mid-February while affiliated with the now-defunct Harrison & Bates, said the company had an option to purchase the land but elected not to do so. He said talks with Poindexter sped up when another offer came in for the property, which had been listed with an asking price of $6.5 million.

“I think what really got Poindexter to the table is I had another offer, but he was able to better his business terms to win out,” Newman said. “It was listed for a lot more than what he paid for, but we didn’t have a lot of comps to support it. Given the timeframe under which he was willing to close, the seller was willing to come down on price.”

The purchase is the latest in a string of deals Poindexter has made since 2012, when he started compiling what now totals more than 1,000 acres in the vicinity of the race track and the Criss Cross homestead, which remains in separate ownership and occupied. 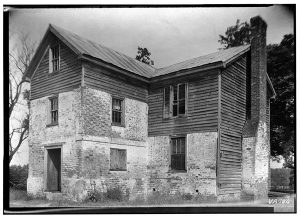 The house known as Criss Cross, which has since been updated. (Library of Congress)

As of 2013, Poindexter had spent more than $1.3 million to purchase 965 acres, much of which would have been his family’s land centuries ago. The following year, county property records show, he paid $2.6 million for two tracts totaling 453 acres across North Courthouse Road from its intersection with Kentland Trail, the four-lane divided roadway that leads to Colonial Downs.

While Poindexter has previously told BizSense that he has no interest in developing his holdings, clearing some of the land to make it farmable or suitable for grazing, this latest purchase involves land that New Kent County has eyed as a prime economic development site, deemed able to accommodate a hotel and other uses that could support Colonial Downs and surrounding areas.

Matthew Smolnik, New Kent’s economic development director, said the county administration would like to see such uses on those tracts, which are zoned as a planned unit development district. While it’s unclear whether Poindexter may develop the land someday or keep it as-is, Smolnik described the site as the county’s best chance to attract tourism-related uses, including what would be its first hotel.

“With Colonial Downs now being a destination for Virginia, those 260 acres going into it, that’s my primetime real estate property in the county,” Smolnik said. “I believe the planned unit development booklet shows that (land) for travel/tourism-related businesses: hotels, restaurants, retail.

“Mr. Poindexter’s been buying up land for conservation. What he plans on doing here, we can only hope that it’ll be for the benefit of all the citizens of the county for our tax base,” he said. “But he holds the cards with this one. He’s the property owner.”

Mark Hubbard, a spokesman for Colonial Downs Group, said the option on the property came with the race track purchase, which the group closed on last year for $23 million. He said the group would be supportive of development on the site but isn’t opposed to Poindexter preserving it.

“We have plenty of land to do what we want to do, so we had no qualms or issues with Poindexter purchasing the land,” Hubbard said. “We didn’t need to exercise the option because we didn’t need the land, and we had never paid for that option; it just came to us as part of the deal when we bought the track.”

Regarding a hotel or other uses that could support Colonial Downs, Hubbard said no plans are in the works yet and he doesn’t know or any plans for the Poindexter property. Newman said his understanding is that Poindexter is not planning to put a conservation easement on the land.

Colonial Downs Group’s priority of late has been readying the track for races that are planned to start Aug. 8, and its Rosie’s Gaming Emporium off-track horse-betting parlors across the state, opening its Richmond parlor on Midlothian Turnpike on Monday.

“We haven’t seen anything, but I don’t think we would oppose to him doing that,” Hubbard said of developing the site. “We’ve got a race track and a gaming facility; if somebody’s going to build a hotel next door, I can’t imagine we would object.”

I want to understand what type of ‘conservation’ Mr Poindexter is doing. All I see is him cutting down just about every tree in New Kent. I don’t even recognize some roads as all the trees are gone. For us regular Joe’s in the area, we have to get permission to take down 1 tree on our own property then have to replace the tree with a new one. I’m sure he wants to do good for the county, but why does he need to strip the land free once he buys it.