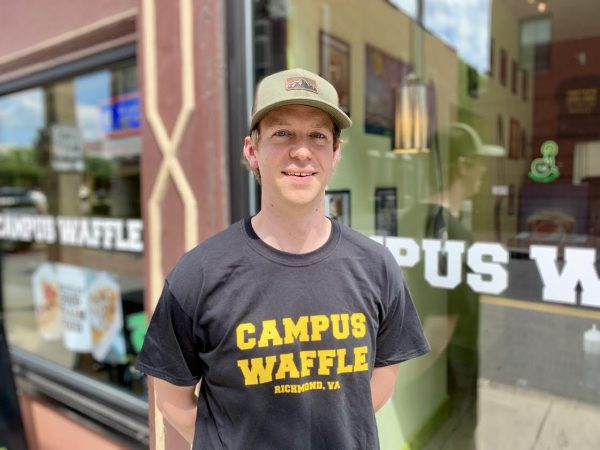 Not one to waffle on the success of a new concept, local restaurateur Brad Barzoloski is at it again.

The restaurant is now open after holding its soft opening Monday, with plans for a grand opening sometime in August. 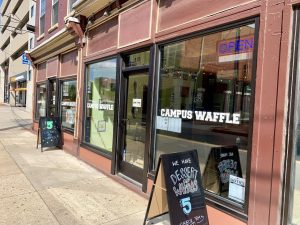 Campus Waffle plans to serve up a variety of waffle dishes that have proven popular downtown, while mixing in plenty of twists and turns for the college crowd.

It won’t be like a Waffle House or similar restaurant, Barzoloski said. Offerings would include “triple-decker s’mores, or red velvet waffles, or Fruity Pebbles batter or a mac n’ cheese burger/slider waffle cone … Here, we plan to do more of the wild stuff.”

The menu includes “Wiscuits n’ Gravy,” a waffle biscuit served with gravy and side of eggs, and its “Fruity Pebbles Maple Fraffle,” a waffle apple fritter doused with maple syrup and pressed in Fruity Pebbles cereal that’s served on a stick.

An ABC license is pending for the Campus Waffle location, which Barzoloski said plans to serve beer, wine and cocktails. 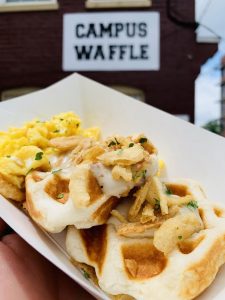 Several menu items do not exceed $5, which Barzoloski said hits the sweet spot for VCU and VUU students looking to dine on a budget.

“We’re trying to go more for the college price point,” Barzoloski said. “Downtown is already cheap, but here, we’re trying to really stick it to the $5 a plate.”

At 1,000 square feet, Campus Waffle seats about 16 people and employs about 13. It’s open from 9 a.m. to 9 p.m. seven days a week for breakfast, lunch and dinner, with plans to extend late-night hours to 3 a.m.

“Once we’re able to get our ABC license, we’ll look into extending our hours,” Barzoloski said. “Having late-night hours is something that would work well here given the number of college students that will be returning in the fall.”

Barzoloski said he liked the location for its proximity to the Siegel Center GRTC Pulse station.

“It’s really serves as a middle ground for VCU and VUU,” he said. “You can get to the location from both universities and the Fan; we’ve got a big parking garage next door, and for people living nearby, it’s walkable … It just made sense to open it here.” 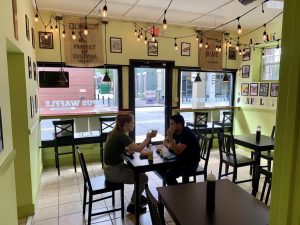 Campus Waffle is a 1,000-square-foot restaurant that seats about 16 people.

Campus Waffle is the latest addition to Barzoloski’s restaurateur ventures in Richmond.

Prior to opening the Capitol Waffle Shop at 1110 E. Main St. two years ago, he owned two locations of his Luncheonette concept – one in Shockoe Bottom that he opened in 2014, and another in Brookland Park that opened in 2017. Both closed last year as he focused on Capitol Waffle.

Barzoloski said he is working on several other ventures, but would not disclose them. However, it’s no secret he would like to revive the Luncheonette in the future.

“I just miss it,” Barzoloski said of the restaurant. “It was a fun concept that, given the opportunity and the right location, would be great to bring back.”