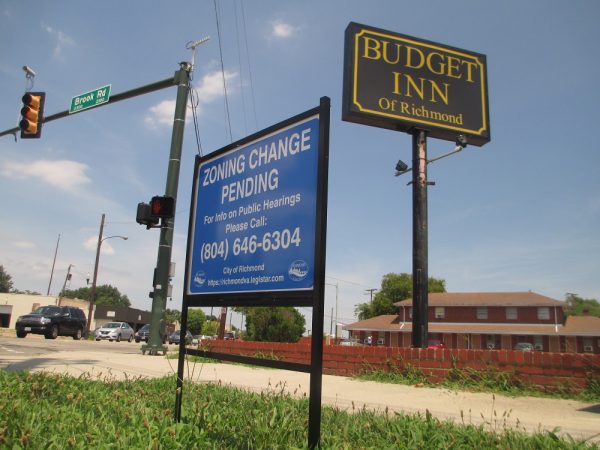 A rezoning notice sign in front of the Budget Inn of Richmond motel, which VUU is under contract to purchase. (Photos by Jonathan Spiers)

The Richmond Planning Commission is set to vote today on a slew of proposed amendments to city code, zoning maps and other development rules to update land uses allowed in the bulk of Monroe Ward and areas east of Virginia Union University, specifically along a stretch of Lombardy Street and Chamberlayne Avenue.

“Zoning change pending” signs have been posted on properties throughout both neighborhoods, signaling the votes to be taken at the commission’s 1:30 p.m. meeting. The items would then go to City Council for final approval.

Initiated last fall, the Monroe Ward proposal involves five ordinance changes that would amend permitted uses, create an overlay district and consolidate existing zoning to create two zoning districts: B-4, the business zoning that already covers much of the ward; and TOD-1, the “transit-oriented nodal district” that the city introduced at Scott’s Addition along Broad Street and Arthur Ashe Boulevard. 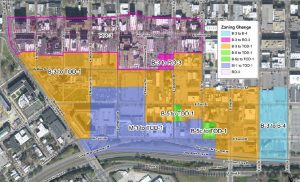 An updated map shows the RO-3 zoning that would remain along Franklin Street as part of the Monroe Ward plan. (Courtesy City of Richmond)

The proposal is prompted in part by recommendations that came out of the city’s corridor plan for the GRTC Pulse bus rapid transit system, along with an eastward push in development activity in the Central Business District, including spillover of VCU’s Monroe Park campus, such as the under-construction engineering building at Belvidere and Cary streets. Interest in developing the ward’s abundance of surface parking lots also is picking up, with at least two such lots being eyed for denser residential projects.

Since declaring in October their intent to pursue the changes, city planners said they received multiple communications from people concerned specifically about rezoning Franklin Street to B-4 due to the zoning district’s lack of height restrictions. The city had been looking to address that by removing the current four-to-one-ratio, “inclined plane” method related to building design, which allows for a structure to go up 4 feet for every 1 foot in width.

Several emails and letters on the topic were received from groups such as Historic Richmond Foundation and its members. Others who reached out included Jack Pearsall, a neighborhood resident and attorney who’s working with Eagle Construction of VA to fill a parking lot at 1 E. Main St. with new townhomes. 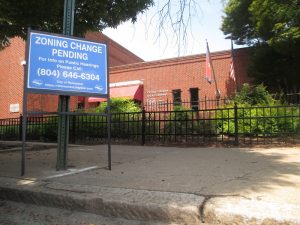 A sign outside the Salvation Army building on Grace Street signals the rezoning proposal.

As a result, the proposal was amended to keep Franklin’s existing RO-3 Residential-Office zoning, but with updates to bring the district’s permitted uses more in line with existing properties. The adjustments have received support from large property owners, developers and an income-based housing advocate, according to a staff report by Anne Darby, a city planner leading both neighborhood efforts.

The VUU-area rezoning, intended to fulfill goals of the city’s 2016 VUU/Chamberlayne Neighborhood Plan, would change existing B-3 and B-2 business districts to the denser UB-2 Urban Business designation, aimed at facilitating mixed-use, pedestrian-friendly development in the area of Lombardy, Chamberlayne and Brook Road.

Initiated this spring, the proposal was presented to the Edgehill/Chamberlayne Court and Battery Park civic associations, and about 40 people attended two open houses held in April, according to Darby’s report. It adds that response to the proposal has been “overwhelmingly positive,” with multiple property and business owners asking staff to proceed with the rezoning “as soon as possible.” 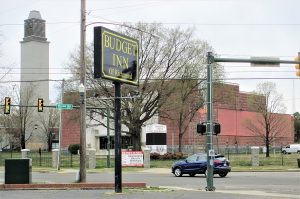 VUU is looking to purchase and develop the Budget Inn of Richmond motel at Brook and Lombardy.

Beyond VUU’s plans for the Budget Inn site, development interest in the area has picked up with several apartment projects proposed nearby, such as Lawson Cos.’ 200-unit plan for a former scrapyard off School Street.

The 103-unit Spectrum apartments, next door to the Budget Inn, was purchased in 2017 for $11.4 million and includes a block of leases for about a dozen units specifically for university students. Between that site and the post office, Loughridge & Co. is planning a $32 million, 224-unit complex at 2009 Brook Road.

The Planning Commission meets in the fifth-floor conference room at City Hall. If recommended for adoption, the proposals are to be considered by City Council at its meeting the following Monday, July 22.

Note: An earlier version of this story included an outdated map of the Monroe Ward rezonings. It has been replaced with a newer map showing the existing zoning that would remain along Franklin Street.