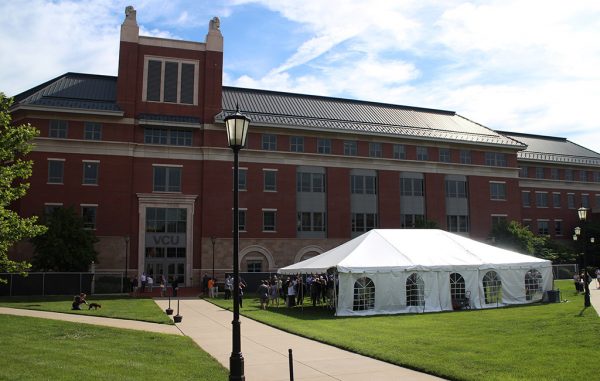 The northeast corner of Cary and Belvidere streets is about to look a bit different, as work is underway on a multimillion-dollar research building for VCU’s School of Engineering.

The university broke ground on the four-story, 133,000-square-foot building at a ceremony Tuesday. VCU President Michael Rao and engineering dean Barbara Boyan were joined by Mayor Levar Stoney at the event.

In lieu of traditional classrooms, the $93 million building will house research labs, career services and faculty offices, and a 9,000-square-foot “Innovation Maker Facility” – an experiential learning space equipped with a 3-D printer and other tools. The building also will have a glass pavilion and outdoor courtyard.

The structure will replace a grassy lawn in front of the School of Engineering’s East Hall. Local architecture firms Baskervill and Smith McClane Architects are designing the building in collaboration with Boston-based Goody Clancy. Kjellstrom & Lee is the general contractor.

The project was included in a $2.43 billion bond package adopted as part of the current state budget, with $43 million allocated for it. The rest of the $92 million project will be covered by VCU and the School of Engineering Foundation. Local tobacco giant Altria donated an additional $1 million.

The project is scheduled to be complete in 2020.

Before then, the engineering school will get another new facility. A few blocks east, the school is working to convert the former Grubbs’ Auto Service at 12 W. Cary St. into a machine shop. 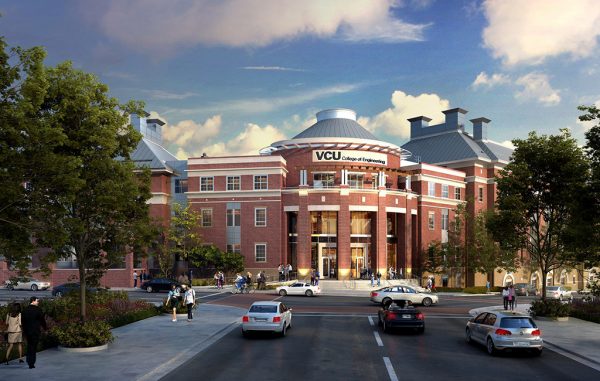 Wow! Normally these renderings leave me flat, but if this building looks anything like the rendering, it will completely transform that intersection. Go VCU!