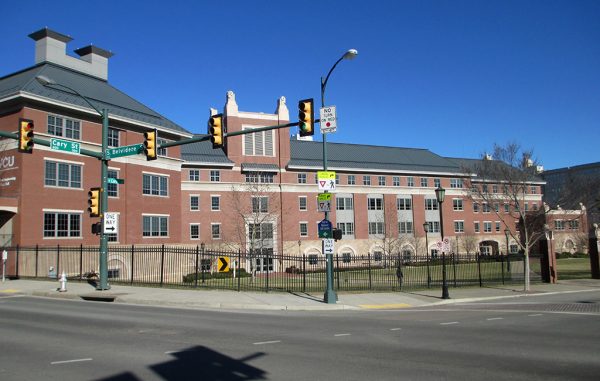 Construction will start later this year on an addition to the VCU School of Engineering’s East Hall building. (Jonathan Spiers)

VCU is gearing up for its next major construction project, filling out a corner of one of Richmond’s busier intersections.

Construction is set to start this fall on a $92 million addition to the School of Engineering’s East Hall building, at the northeast corner of Cary and Belvidere streets.

The four-story, 133,000-square-foot building will fill the lawn area alongside Cary beside the East Hall building and adjoining Snead Hall, where the School of Business is housed.

The building, included in VCU’s 2020 Master Site Plan, will be used as a research and economic development hub for the engineering school. It will house the school’s career services, a 9,000-square-foot innovation space, and various research labs, said L. Franklin Bost, executive associate dean for the school.

He said the building will accommodate growth in the school’s research programs and rising faculty count. The building will not house traditional classrooms, he said, noting plans to renovate parts of East Hall and potentially West Hall across Belvidere to add classroom space. 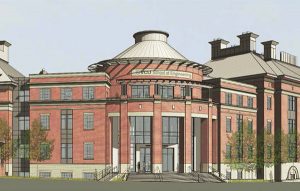 Rendering of the $92 million addition. (VCU)

The contractor on the project is Richmond-based Kjellstrom & Lee, which Woodburn said was selected through a competitive bid process.

The project is being funded through a mix of state and university sources. It was included in a $2.43 billion bond package adopted as part of the current state budget, with $43 million allocated for the project.

Bost said the rest of the $92 million project will be covered by VCU and the School of Engineering Foundation.

He said the project will break ground this summer and is scheduled for completion in September 2020.

A few blocks away, another project is likewise expanding the engineering school’s footprint.

Work is slated to wrap up this summer on a conversion of the former Grubbs’ Auto Service property at 12 W. Cary St. into a 4,500-square-foot machine shop. Bost said the retrofitted garage will host the school’s high-performance projects, such as its Society of Automotive Engineers race car project and its SpaceX Hyperloop transportation pod competition team.

The engineering research building also will add to construction that is reshaping the nearby Monroe Park, which is undergoing a $7.5 million City of Richmond renovation.

Two blocks up Cary, construction continues on the 12-story, $96 million replacement of the former Gladding Residence Center dorms on the south side of the park. Up Belvidere, the recently constructed Institute for Contemporary Art is preparing for a spring opening.

Beyond its Monroe Park Campus, other VCU projects include the $87 million School of Allied Health Professions building under construction at 600 N. 10th St. A block away, VCU Health is planning a $348 million adult outpatient facility. And in Northside, VCU Health is in the process of opening its $56 million Virginia Treatment Center for Children.