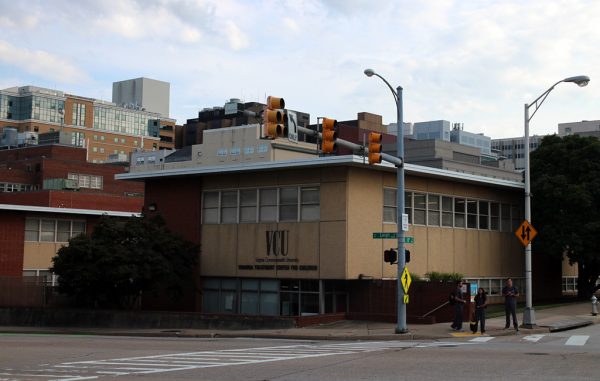 A year after it opened the region’s largest pediatric outpatient facility, VCU Health is going forward with plans for an adult version.

The health system is planning a $348 million adult outpatient facility and adjoining parking deck that would replace the current Virginia Treatment Center for Children at 515 N. 10th St., along East Leigh Street between 10th and 11th streets.

The structure, which could range from six to eight stories in height, is included in the next phase of VCU’s master site plan, which maps out capital projects through 2020. The board of directors for the VCU Health System Authority approved the phase in June.

Detailed renderings and conceptual plans for the building have yet to be presented. VCU spokesman Michael Porter said a variety of building concepts have been discussed but no specific plans are available. 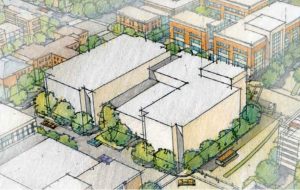 A preliminary conceptual rendering of the site included in VCU’s 2013 master plan. (VCU)

Redevelopment of that corner of 10th and Leigh streets has been on VCU’s long-term wish list for some time. It is one of 11 projects proposed in the master site plan for VCU’s MCV Campus.

The proposal for the corner calls for buildings between six and eight stories in height, and it specifically recommends a tower or other distinctive architectural feature. The building would accommodate ambulatory drop-offs and have primary pedestrian entrances on 10th and 11th streets.

VCU has owned the 1.6-acre parcel since at least 1991, according to city property records. The most recent city assessment valued the property at $8.2 million. The existing two-story structure totals 83,320 square feet and was built in 2005.

The Virginia Treatment Center for Children would move operations to Northside, where a $56 million pediatric psychiatric facility has been under construction on the Brook Road campus of the Children’s Hospital of Richmond at VCU. The new facility, which broke ground in late 2014, is located at 1308 Sherwood Ave. and scheduled to open this fall.

The approval for the adult outpatient facility comes just over a year after the Children’s Hospital of Richmond at VCU opened the doors of its Children’s Pavilion, a $200 million, 640,000-square-foot facility at 1000 E. Broad St.

A block away from the adult outpatient site, VCU is building its $87.3 million School of Allied Health Professions tower at 600 N. 10th St. The eight-story, 154,000-square-foot building broke ground in April.