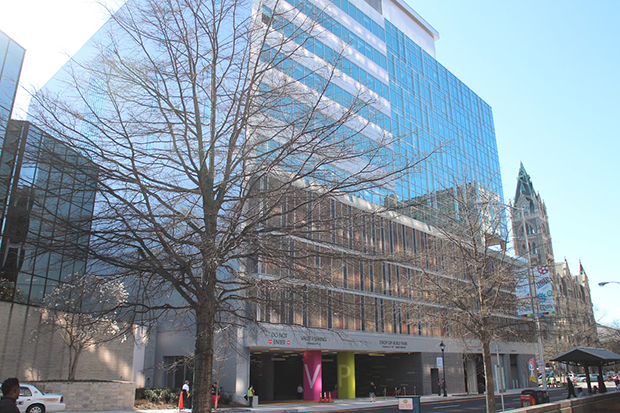 After five years of work, the region’s largest pediatric outpatient facility is ready to open its doors downtown.

A ribbon cutting was held Wednesday for the Children’s Pavilion, a new 640,000-square-foot, $200 million facility built by Children’s Hospital of Richmond at VCU at 1000 E. Broad St.

The 15-story facility is set to open March 21, and the last pieces of construction will wrap up over the next few weeks. It will provide outpatient care specifically for children, housing radiology, same-day surgery, lab testing, dialysis, infusions and other services. It’s meant to centralize VCU’s pediatric services, which have been spread around multiple sites. 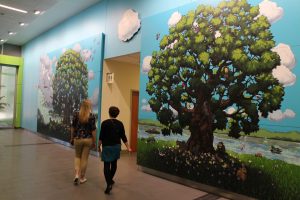 Paintings of forests and animals adorn the ground floor.

“This is an institution that makes its decisions based on what we believe ultimately is in the best interest of all children,” VCU President Michael Rao said during the ceremony. “Patients we serve will always have the very best care we know to be available, generation after generation.”

The building houses 83 exam rooms separated into pods and more than 350 clinical professionals.

Construction began in 2012. HKS was the architect, and Skanska USA Building Inc. was the general contractor. JLL was the project manager.

Its design includes a sky terrace overlooking West Broad Street with trees and artificial grass. The lobbies utilize interactive features, with sea-themed floors that children can walk on and watch fish swim away from their footsteps, as well as paintings of forests and animals on the ground floor.

The building was designed with children in mind, according to VCU Health System CEO Marsha Rappley. The Children’s Hospital of Richmond at VCU was formed in 2010 and is part of the VCU Health system.

“These spaces were created to relieve the suffering, provide a little entertainment, humor, opportunities to explore – a healing environment that is full of light,” Rappley said. 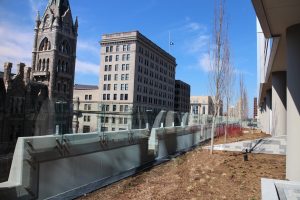 Gov. Terry McAuliffe was in attendance at the ribbon cutting, calling the Children’s Pavilion “the greatest outpatient facility in the United States of America.”

“It makes it easier to bring businesses in from around the globe when you have a facility like we have here today,” he said.

The facility also adds 600 parking spaces to a congested part of downtown – a fact that garnered applause from the audience during Wednesday’s ceremony.

As an outpatient facility, the Children’s Pavilion is not to be confused with the independent, full-on children’s hospital that some have envisioned for the Richmond region. Efforts for such a facility lost steam last year when VCU and Bon Secours both withdrew their support from the proposal, which was projected to cost upwards of $600 million. The Virginia Children’s Hospital Alliance was the group organized to make a push that facility with the backing of well-known local philanthropists.