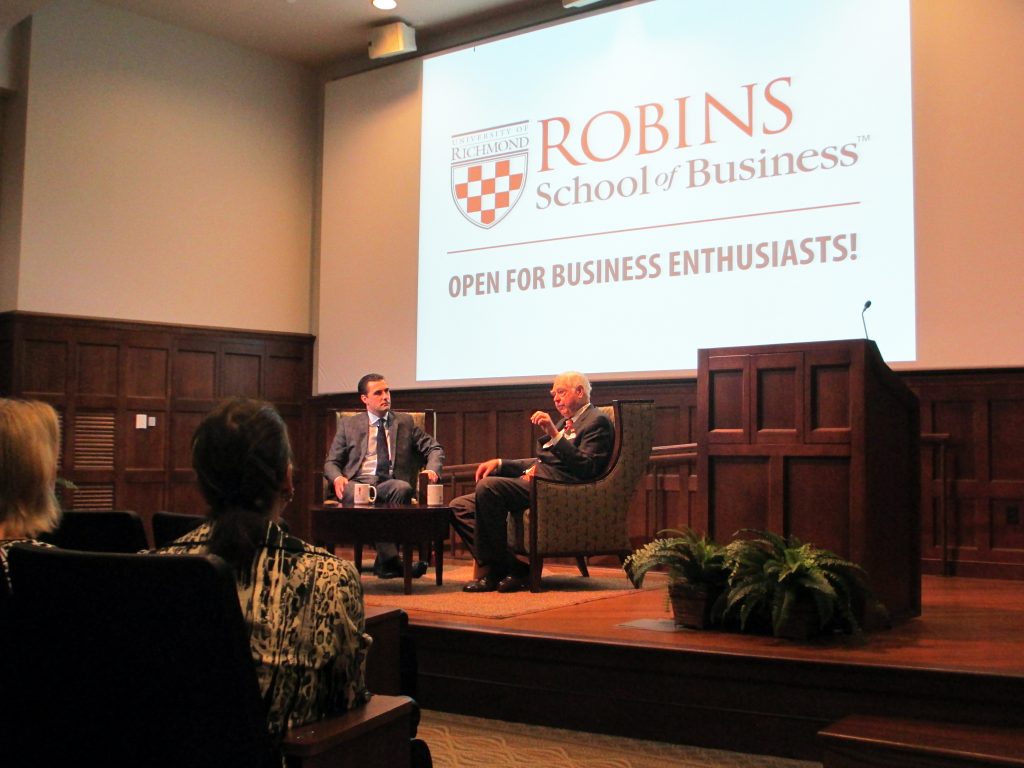 A full house welcomed businessman and philanthropist Bill Goodwin as the latest – and last – guest in this year’s C-Suite Conversations series at the University of Richmond’s Robins School of Business.

Goodwin, the retired chairman and president of CCA Industries, a diversified holding company that oversees businesses that include the Jefferson Hotel, spoke about his path from IBM to starting his own business, responding to questions posed by Senior Associate Dean Richard Coughlan.

Asked what principles have guided his success, from his and his partners’ purchase of AMF Bowling in the mid-1980s to later acquisitions such as the Keswick resort near Charlottesville, Goodwin’s advice was simply put.

“You really do have to do what’s right, and you have to keep your word,” he said. “Certain people have certain talents, and I think people need to use those talents to help other people. Do what you ought to do, and in particular, try to look out for your fellow man.

“I try to be straight, I try to tell the truth, and I respect people who do the same,” Goodwin said. “I don’t try to treat anyone any differently than what I would want to be treated myself.”

Goodwin also touched on his push for an independent children’s hospital in Richmond. He said such a facility would serve a growing regional need and make Richmond “a dominant force” for states between Philadelphia and Atlanta, where he said comparable facilities are located.

Goodwin said the hospital would need to be located at a site that’s between 50 and 100 acres, with room for expansion and access to road networks and other supporting infrastructure. Earlier this month, Goodwin’s Riverstone Properties purchased a nearly 100-acre tract at the convergence of interstates 95 and 295.

“It can’t be downtown because there’s not enough land mass to really do what needs to be done,” Goodwin said. “If we’re going to do something, let’s do it right. Let’s really try to be outstanding. Let’s make an effort and have a dream.”

Goodwin said he and his wife, Alice, who was in attendance at the event, have been working on the hospital for the past eight years.