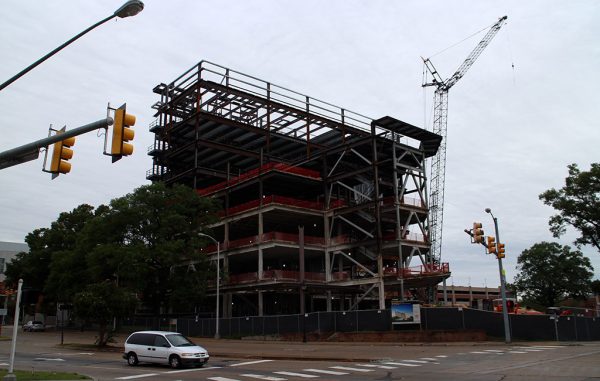 A massive steel girder was ceremoniously lifted into the downtown sky Monday morning, but not before the Sharpies had a chance to dry.

VCU held a topping-out ceremony for its new School of Allied Health Professions building, which is under construction at 600 N. 10th St. The $87.3 million project broke ground in April and is slated to open in fall 2019.

The event marked the placement of the building’s highest beam, which was installed by construction company Whiting Turner and was adorned with dozens of signatures of VCU staff, students and faculty, who were invited to autograph it.

At 154,000 square feet, the L-shaped building will host 11 VCU programs that are currently located across five buildings at VCU’s MCV and Monroe Park campuses.

“(This facility) will give us the opportunity, and I say ‘us’ because I’m a member of the faculty as well, it will give us a chance to be together,” VCU President Michael Rao said. 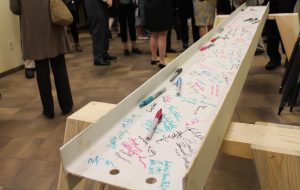 Both the Virginia General Assembly and the VCU Board of Visitors in 2016 approved the project, which began with the demolition of four dormitories.

The state is financing the bulk of the project, with university-supported debt pitching in $10.8 million.

Across the intersection of East Leigh Street and North 10th Street, VCU Health is plotting another new facility whose price tag dwarfs that of the School of Allied Health Professions’ new building.

A $348 million adult outpatient facility is being planned at 515 N. 10th St. It will likely rise six to eight stories and will replace the Virginia Treatment Center for Children, which is moving to a $56 million pediatric psychiatric facility that’s under construction on the Brook Road campus of the Children’s Hospital of Richmond at VCU.

VCU bites off another piece of W. Cary - Richmond BizSense

[…] MCV campus recently hit a landmark on another major project. Earlier this week it held a topping-off ceremony for the $87 million School of Allied Health Professions building, and just across the street, VCU […]