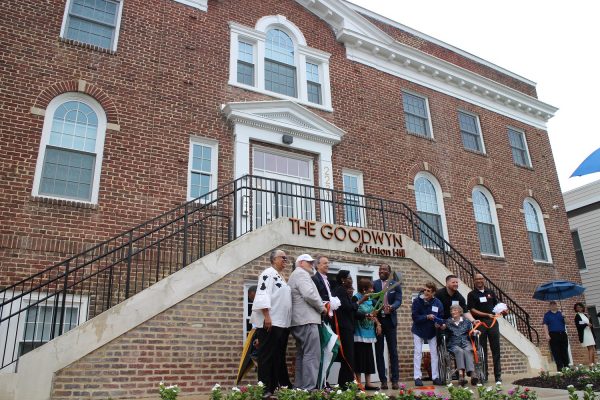 Dignitaries cut the ribbon in front of the citadel building. (Photos by Jonathan Spiers)

The former Citadel of Hope building, also known as the House of Happiness when it was constructed as a community center in 1923, officially entered its next phase – The Goodwyn at Union Hill – with a ribbon-cutting ceremony held at the site Tuesday.

The development – a years-in-the-making conversion of the Colonial Revival-style building and 2-acre property along Venable Street into 52 income-restricted apartments – has moved in residents and is fully occupied after receiving more than 150 applications, officials said. 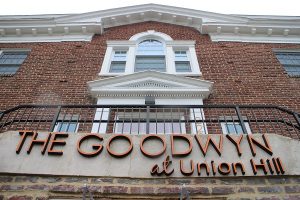 Signage has been added to the renovated Citadel of Hope building.

The $9.4 million project, by local nonprofit Better Housing Coalition, was funded in large part with a $5 million gift from the Hilton W. Goodwyn family. The gift, made in the form of an endowed charitable fund, was made in 2016 through The Community Foundation by married couple Hilton Goodwyn Jr. and Erline Goodwyn, Hanover County residents who grew up nearby in the Church Hill area.

The fund was created in honor of the parents of Goodwyn Jr., who died later the same year after a career in the mortgage business and real estate development that included properties in Carytown and downtown parking decks, according to his obituary.

Erline Goodwyn, his widow, was among four generations of the family who attended and took part in Tuesday’s ceremony, which included remarks from Richmond Mayor Levar Stoney, City Council President and district representative Cynthia Newbille, and BHC CEO Greta Harris.

Reading from a prepared statement, Erline Goodwyn told attendees, “On behalf of my late husband Hilton and myself and our families, I would like to say it is with great excitement and joy that we have been a part of helping to revitalize Richmond by converting the original House of Happiness into an affordable housing community, in a place that meant so much to Hilton and me as children.

“I would also like to thank everyone who helped make this a reality. I know that I am speaking for Hilton also when I say I hope people who live here, now and in the future, will have as many cherished memories as we’ve had,” she said. 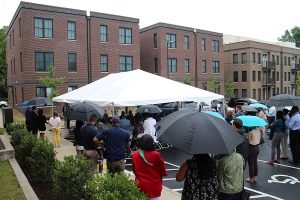 Some of the newer buildings as viewed from the central parking lot.

Consisting of one-, two- and three-bedroom units, the apartments are restricted to people earning 40 to 60 percent of the area median income, with monthly rents ranging from $500 to $1,200. Residents with project-based vouchers from the Richmond Redevelopment and Housing Authority also are eligible.

Including the renovated citadel building, the development consists of six detached buildings varying from two to four stories that enclose a central parking lot. One of the newer buildings includes a community room, which is named for Mary Thompson, an area resident and former BHC board member who assisted with the project and also spoke at Tuesday’s ceremony.

Harris noted in her remarks that BHC’s involvement in Church Hill and Union Hill dates back 25 years, with 27 for-sale homes and 169 rental homes produced since 2010, representing a total direct investment of just under $43 million. 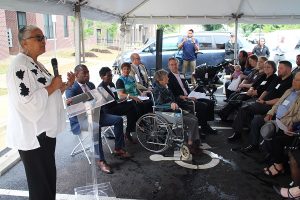 Noting private development interest in the area has picked up since then, Harris told the crowd, “Richmond is going through a renaissance … and yet, with all of that excitement, it has a double-edged sword sometimes.

“Some of our most vulnerable citizens are finding it more and more challenging to be able to stay and be a part of the good things that are going on in our community, because the price points keep going up higher and higher, both for home ownership and for rental properties,” she said.

In their remarks, Stoney and Newbille praised the project as providing housing options along with a level of quality.

“The Goodwyn at Union Hill is an example of how affordable housing can be functional and beautiful while fulfilling all the needs,” Stoney said. “As a testament to the need, The Goodwyn at Union Hill received more than 150 applications for its 52 units, just demonstrating the need and desire for more affordable housing here in the city of Richmond.” 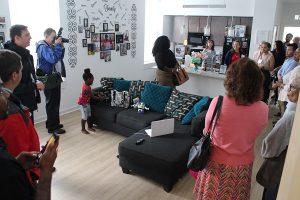 Attendees tour one of the apartments, which are fully occupied. 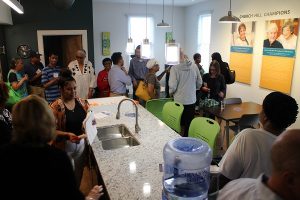 The community room is named for area resident and project supporter Mary Thompson.

“It’s one thing to have housing,” Newbille said. “But it is another thing to have quality, affordable housing accessible in our community. It makes a difference. It’s about health and wellness.”

BHC purchased the property in 2014, and following several design changes in response to neighborhood feedback, construction started in fall 2017 and wrapped up this year. The buildings were designed by Walter Parks Architects, and J.C. Lewis Construction Management was the contractor.