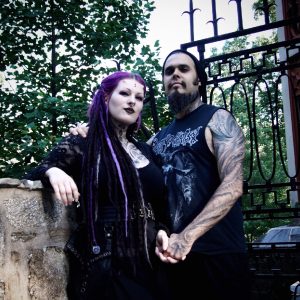 The Arts District is set to get a tattoo shop with a haunted twist.

SinnerG Tattoos, which will combine a tattoo parlor, haunted house and art gallery, is preparing to open at 315 E. Broad St., next to the new Gather coworking space.

Married couple and local tattoo artists Sabrina Elliotte and Jorge “Gwooki” Aguirre are behind the new venture. The couple moved to Richmond three years ago, bringing backgrounds in the performing arts, including special effects, acting and set creation.

They’ve operated an annual haunted house out of their home in Midlothian since arriving in town, drawing 2,000 people over two days last Halloween. Calling it “Sinisteria,” they went to a haunted house trade show and got certification, and took safety classes as they got more into it.

“We just had so much fun with it, and we’re both so inspired by dark arts. We did it trying to be a little more kid-friendly, and then as we went onto the next year, we kind of naturally got away from that,” Elliotte said.

The move downtown came after the increasing popularity of their in-home show led them to see the operation needed a home of its own.

They’re leasing 2,300 square feet across three floors in a building that local developer Duke Dodson’s Dodson Development bought in 2016. Also going into the building is coworking space Gather, which is relocating from its 409 E. Main St. location. 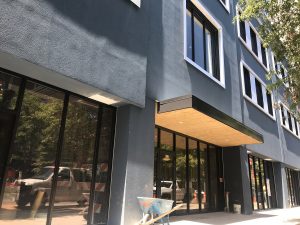 SinnerG Tattoos will open near the intersection of East Broad and North Fourth streets. (Mike Platania)

SinnerG’s tattoo area will be in the back of the building and the front will be akin to an art gallery with Gothic furniture and wall decorations that’ll be for sale.

They said they looked all around Richmond for a good spot for the shop but had a hard time finding a landlord that was open to the concept.

“We were really open about how we want it to look and the type of vibe we’re going for, and we were pretty much told ‘no’ by everybody,” Elliotte said.

“We wanted to make sure landlords are OK with painting the walls, the ceiling and the floors black with skulls and dark art everywhere. (Dodson) was super cool with it.”

“We wanted to do our own thing. It’s not a regular tattoo shop; we’re bringing some of our own style and vibe to it,” Aguirre said.

SinnerG is aiming for an early October opening.