Sonic is preparing to open a new-to-market format that excludes drive-thru and drive-in vehicle service in the 805W mixed-use development at 805 W. Cary St. near VCU. (J. Elias O’Neal)

A national fast-food chain with eight locations in the Richmond suburbs is cooking up its first location in the city, with plans to bring a new-to-market format to the edge of Oregon Hill.

Sonic has signed a lease to take over about 1,500 square feet in the 805W project – a four-story, 100-unit apartment development with about 8,000 square feet of ground floor commercial space that’s under construction at 805 W. Cary St. 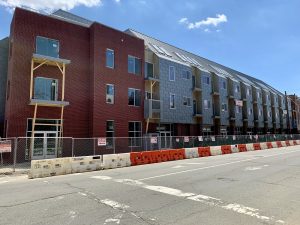 Sonic will join Pita Pit as one of the the first commercial tenants of the 805W mixed-use development near VCU. (BizSense file photo)

While it’s known nationally for its traditional drive-in and drive-thru window service, Sonic will forgo its typical store model for the 805W spot in favor of a dine-in concept – the chain’s first in the state.

That design will look to cater to VCU students frequenting the stretch of Cary Street between Harrison and Belvidere streets, and to the growing number of residents.

Brokers Peter Vick and Harrison Hall of Divaris Real Estate | Richmond handled the lease on behalf of the landlord, a group made up of Kevin O’Leary and James Flanigan, who own J.D. Lewis Construction Management, and local developer Larry Cluff. Nicki Jassy with Cushman & Wakefield | Thalhimer represented Sonic.

Sonic will join Pita Pit, which in June signed a lease to take 900 square feet in 805W.

The Oklahoma-based chain, through franchisees, operates eight restaurants in Henrico, Hanover and Chesterfield counties, along with a location in Colonial Heights.

The new location is a franchise owned by Justin Orlando, who said in an email Tuesday the Cary Street space will have indoor dining, although they are still finalizing the seating capacity. It also will include an area for take-out and delivery service pick-up.

Like its drive-thru and drive-in locations, Orlando said the Richmond Sonic will serve up the chain’s signature food and drink items, such as its burger, hot dog and chicken combos; and its Slushes, mixed fountain drinks and ice cream.

Sonic is targeting an early 2020 opening, Orlando stated, with plans to staff the location with 30 people.

A general contractor has not been selected to build out the space.

The new store design, according to the company’s website, looks to appeal to patrons in urban areas similar to where the 805W development is rising, and is part of the company’s efforts to reach more consumers in cities.

“The Richmond downtown area seems to be undergoing a real resurgence, with the restaurant scene growing as well,” Orlando said. “It was also very encouraging to find a location so close to the VCU campus.”