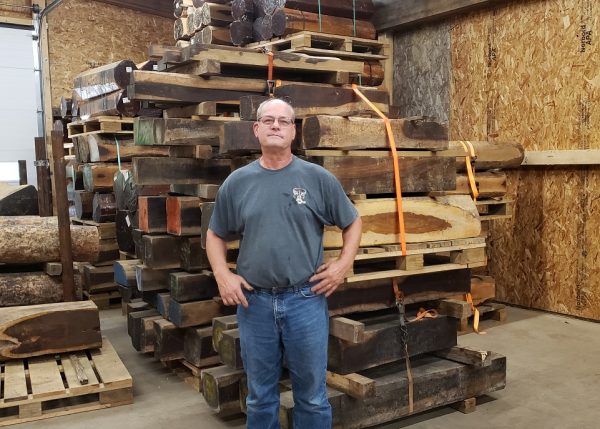 Tucked away down a winding gravel road in the woods of Powhatan is a lumber mill that’s carving out an industrial niche with the help of the tree of life.

Lignum vitae, Latin for “tree of life” or “wood of life,” is a long-endangered species of tree indigenous to Central America.

Local resident and entrepreneur Bob Shortridge has built an entire business model around the wood, rare as it is.

Shortridge owns the mill at 2487 Judes Ferry Road, which has long been home to his Dreaming Creek Timber Frame, founded in 1983. He recently shifted his resources, and now is closing Dreaming Creek to focus fully on his new venture, Lignum-Vitae North America. 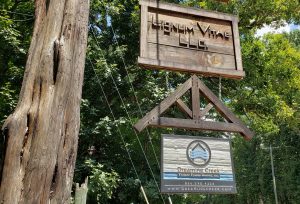 Construction recently wrapped up on the outer frame of a new 13,000-square-foot woodshop onsite that will house four stations for fabricating water-lubricated industrial-strength bearings made of lignum vitae wood.

The new facility cost around $1 million and was constructed by his own team, with much of the equipment being repurposed from Dreaming Creek, which Shortridge said further solidified the choice to go all in with Lignum Vitae. He estimated the change in course will let the company move 10 times as much product as it does currently.

“So much of the equipment was overlapped to the business we did here at the (Dreaming Creek) mill, so we kept the equipment that was relevant to crossing over and sold the rest,” Shortridge said. “We are now 100 percent committed to water-lubricated lignum vitae bearings at this point.” 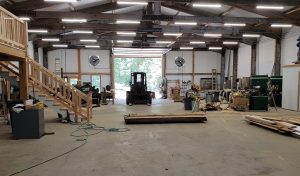 The new facility is still under construction on the inside. Once complete it will have four stations dedicated to producing lignum vitae bearings.

Lignum vitae wood is known to be the densest and hardest wood in the world — its strength, Shortridge said, is comparable to solid aluminum. It also is self-lubricating, making it ideal for use for bearings in many industrial settings. The wooden bearings eliminate the need for petrochemical oils as a lubricant, which makes its use in hydroelectric plants and shipbuilding, where water contamination is always a risk, an attractive solution. The lifespan of the wooden bearings also is greater than that of most other materials, he said.

Shortridge first started work on the Lignum Vitae brand in 2005, shortly after winning an auction from the Norfolk Naval Shipyard for 2.5 tons of the wood.

“A friend called me and said he’d found a stash of this wood called ‘lignum vitae’ down at the Navy shipyard and wanted me to go and identify it and see if it was worth looking into,” Shortridge said. “I knew a little bit about lignum vitae then, but very little.”

The wood would prove to be authentic and Shortridge eventually would win the auction by just $1, he said — though he declined to share the final purchase price. 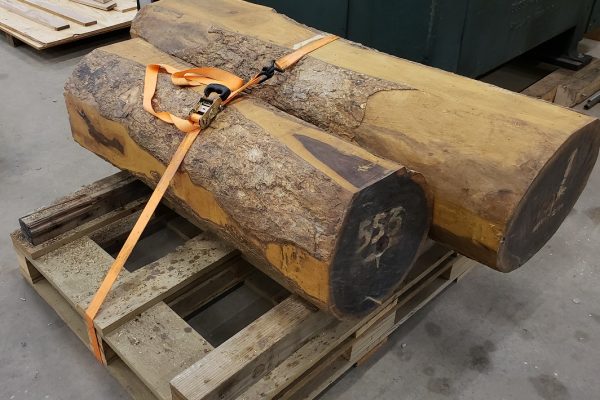 Lignum vitae wood is known to be the densest and hardest wood in the world.

After a tractor accident that claimed two of his fingers and left him briefly bedridden, Shortridge said that with nothing much else to do, he started further researching lignum vitae.

“During that research I just found one reference after the other after the other to lignum vitae,” he said. “I put up an informative website and out of the blue started getting calls from hydroelectric plants, and found that there were plants that had been running their bearings on it for decades. One installation said they were on their third bearing change since 1920, so these things can last 40 years or so.”

The longevity of the wood interested Shortridge, who said he believes in sustainable harvesting and building things that last. It was especially important considering lignum vitae’s classification on CITES (Convention on International Trade in Endangered Species) appendix II list of endangered species, after it had been overharvested in the 1940s.

“World War II put enormous pressure on the material, so it was harvested to a really hard place. But here we are 70 years later, and trees grow. Plus they never got to the interior stands; they only hit the islands and the edges,” Shortridge said. 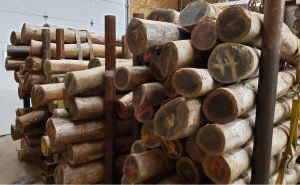 Only limited amounts of the wood can be harvested for trade.

An appendix II classification means the species is not considered at threat for extinction, but could be if overharvested, so only limited amounts are allowed to be harvested for trade. Shortridge said 480 cubic meters per year of wood is what his company is allowed, which comes out to one-quarter of 1 percent of the total adult population of lignum vitae trees. As far as he knows, his company is the only one with the proper CITES clearance to harvest it.

CITES did not respond to requests for comment at the time of publishing.

Harvesting at such small quantities ensures the trees are still able to grow in population. Shortridge said that selectively harvesting the most mature trees in the center of a cluster can even be beneficial to overall population growth.

“When we harvest that tree out in the middle, there’s on average 12 or 15 baby trees. They require that larger mother tree as a nurse to shield the sun until they get to be 15 years old or so, and come out of the grass stage and need to find their place in the sun. So when we’re harvesting a singular tree, there are 12 or 15 in the periphery that are waiting for some sunshine from below that canopy,” Shortridge said.

To achieve such parameters, the wood is hand harvested by a partner in Central America and then shipped to the Norfolk shipyard, where it is picked up. Lignum-Vitae North America declined to release the exact location of the lignum vitae trees, or the partnering company in Central America.

Last, Shortridge said Lignum Vitae operates under a self-imposed harvest schedule of 400 years, meaning that’s as often as the company will take the larger trees from the same area. At 400 years, the trees will have reached the median lifespan and some already will have begun to die off naturally.

It’s the wood that makes it good 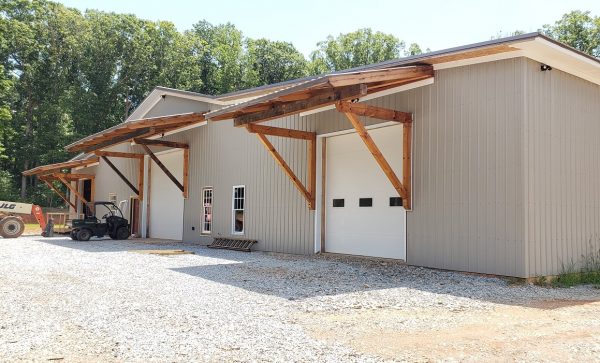 The outer shell of the $13,000 square-foot building completed construction at a cost of nearly $1 million.

Even with a limited supply, the growth into the new facility in Powhatan was necessary as orders for bearings were starting to come in faster after initial success showed lignum vitae’s viability.

One of the hydroelectric plants that reached out to Shortridge was the Osage plant in Missouri, which had been having chronic problems for four years, to the point it no longer could function.

Shortridge suggested trying lignum vitae bearings, which can be flush against the other parts of the machine, needing only a thin film of water and being otherwise self-lubricated. Plastic or metal bearings, on the other hand, require spacing between the bearings for oil lubrication and water cooling, which can cause heavy vibrations in the space. Using lignum vitae eliminated nearly all of the vibration and the plant was made operable again.

After Osage, Shortridge said calls started flooding in from hydroelectric plants worldwide and Lignum Vitae now has converted over 250 plants from plastic or metal bearings to lignum vitae wood.

Lignum Vitae also has been expanding into ships, providing engine bearings to large vessels such as a Coast Guard cutter, a Great Lakes freighter and even an Indian aircraft carrier.

“We found that lignum vitae has been in ships for years and years. To qualify for ships, you have to have American Bureau of Shipping approval, and we found out that lignum vitae had been approved for everything from icebreakers to aircraft carriers to the largest ships in the world for decades past. So we got immediate approval,” Shortridge said.

“The very first job we got was within two months of learning we could do ships for a Coast Guard cutter, and the second was for an aircraft carrier in India, and then a Great Lakes freighter we just did last week in Canada.”

The bearings cost anywhere from $5,000 to $200,000 depending on size and specifications — more expensive than bearings made of other materials.

Shortridge said the types of clients he serves demand the long lifespan and reliability lignum vitae can supply.

“We’re not the low-cost provider, but what we offer is reliability. When you’re looking at machines like this, I mean think about it,” Shortridge said, pointing to a picture of the INS Vikramaditya, the Indian carrier for which the company provided bearings.

“Is it OK if it shows up almost on time almost all the time? No. It has to be completely reliable, and there’s no failure mode to (lignum vitae bearings). It just wears; there’s never a catastrophic failure.”

Shortridge has seven employees working the mill, and can produce one custom bearing at a time until the new dedicated Lignum-Vitae North America facility becomes fully operational.

But once up and running, he said there’s plenty of work to be won.

He recently spoke on lignum vitae’s viability to groups of hydropower professionals from across the globe at Hydrovision 2019, a hydropower convention held in Portland, Oregon.

He said he was asked there if he had availability to convert the bearings in as many as 765 turbine engines from composite materials to wooden lignum vitae bearings.

Shortridge said that thanks to the development of his new facility, “Yes, we can.”

Fascinating article, and congrats to Shortridge on this interesting new direction. I’m glad we acquired beautiful timber trusses from Dreaming Creek a few years ago when adding on to our house; I know that company will be missed.

I am now 70 years old, the year was 1958 (when I was a child, my Father who was an architectural wood turner all his life working in the East end of London England brought home a piece of lignum vitae for me to look at. I remember it had the most beautiful colors that I had ever seen for wood, a red oak color with a bright yello band around it. The piece look like in had been oiled but was in its natural state. He told me that it weighed 88lb a cubic ft and will sink in… Read more »

About as niche as niche can get! Probably one of the most interesting articles I’ve read on this site.