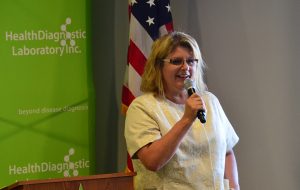 Mallory, who filed the suit in December 2017, argued that LeClairRyan gave her “incorrect legal advice” related to the lab company’s practice of paying fees to doctors who were using its tests – a practice the government eventually labeled as kickbacks.

The payments, which the company dubbed “processing and handling fees,” eventually became the target of a federal government investigation and lawsuit, which led to HDL’s collapse into bankruptcy in summer 2015 and numerous lawsuits filed against Mallory and others.

While the kickback allegations were HDL’s downfall, a jury in a separate case in South Carolina found Mallory liable for violations of federal anti-kickback statutes, and defrauding Medicare and Tricare. She was ordered to pay $111 million in damages to the federal government, a ruling she continues to appeal.

LeClairRyan had argued for more than a year that the case in Richmond should be thrown out, in part because the verdict in the South Carolina case found Mallory personally liable.

Jenkins agreed, writing in his Aug. 8 opinion that Mallory cannot “re-litigate” in local circuit court issues that previously were decided in federal court.

He found that the jury verdict of Mallory’s “knowing, willful violation” of federal anti-kickback laws counters her argument that she relied on LeClairRyan’s advice in good faith.

LeClairRyan, in a prepared statement Friday, said: “We are very pleased with the court’s decision and we wish to acknowledge our appreciation for the dedication and skill of our counsel, Craig Merritt and David Lacy of Christian & Barton, LLP, who worked tirelessly to represent us.”

Mallory was represented in the case by attorney Robert Hall of Northern Virginia firm Hall & Sethi. A message left for Hall was not returned Monday afternoon.

The relationship between LeClairRyan and Mallory dates to 2008, when she enlisted the law firm with help launching HDL. The firm then represented the company during its fast climb to more than 700 employees, with LeClairRyan namesake Dennis Ryan leaving the firm near HDL’s peak in 2012 to go work for the lab in-house.

The relationship eventually cost LeClairRyan $20 million, the amount it paid to settle claims filed against it by HDL’s bankruptcy trustee. The firm’s announcement last week that it is shutting down amid financial trouble makes moot the question of whether it would have had the wherewithal to pay Mallory any damages if she had won her suit.

Mallory also was sued by the HDL bankruptcy trustee, agreeing last year to settle the claims by paying $10 million, an amount that was to include any proceeds she might win if she was victorious in the suit against LeClairRyan.

HDL’s bankruptcy continues to play out in Richmond bankruptcy court, as the trustee hunts for funds to pay back to creditors.

Meanwhile, in Delaware federal court, True Health Diagnostics, the company that bought the bulk of HDL’s assets out of bankruptcy, has itself fallen into Chapter 11 bankruptcy and laid off dozens of employees from its Richmond lab, which is housed in HDL’s former lab downtown.

True Health is working to reorganize and has obtained financing to continue its operations.

Yet another chapter in the long history of HDL, which is dead yet still lives.