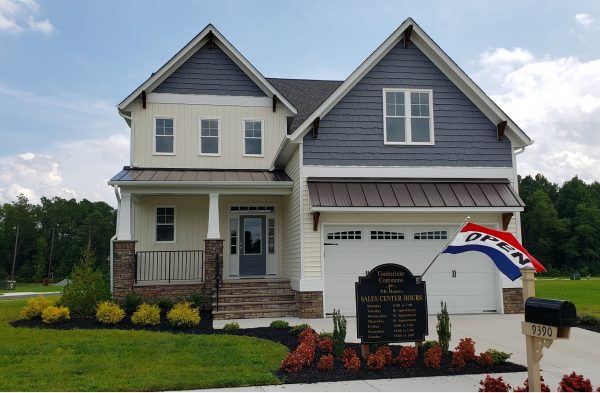 NK Homes is building houses at Timberlake Commons off of 9618 Chamberlayne Road. (Photos by Josh Cozine)

Houses are starting to spring up in a new residential development on land in Hanover County that had been in limbo for years.

The first wave of units and sales are underway at Timberlake Commons, which is taking shape on 12 acres at 9618 Chamberlayne Road in Mechanicsville.

The new homes mark the end of a back-and-forth history for the property, which had gone through a change in ownership that brought in a new developer and builder, as well as changing real estate brokerages a few times. 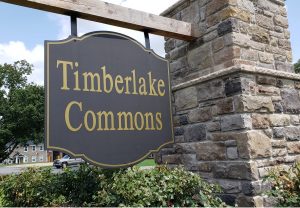 Timberlake Commons has been nothing but a name since 2014 until the model house went up midway through 2018. The first residence was completed early this year.

Previous owner Prospect Custom Homes initially showed interest in developing the site in 2014 by proposing 73 units. Community feedback led to lower density as the number of homes fell to 40.

Godsey Properties Inc. purchased the land for $750,000 in 2016. Godsey brought on homebuilder NK Homes to begin looking to build houses in February 2018. After initially working with agents from Weichert Realty and Liz Moore & Associates, Exit Realty Parade of Homes is now enlisted to market the single-family detached homes.

NK Homes’ president, Dennis Harlow, explained what happened since Prospect Custom Homes sold the land. He said after the change of ownership, development plans had to be resubmitted to the county, and it took most of two years for the paperwork to clear in 2016.

“It took a bit of time to get development off the ground,” Harlow said. “The first buyer is always key, and the first one came in around the end of 2018 and we closed on the first unit early this year.” 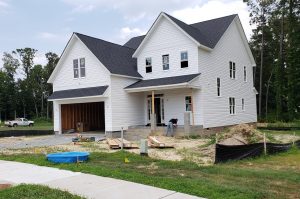 Five houses have been sold at Timberlake Commons. Two are still under construction. 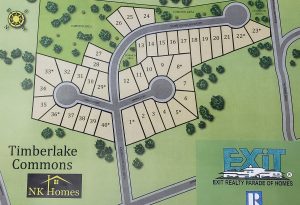 A map of Timberlake Commons. (Submitted)

Five homes at the development were sold between September 2018 and June of this year while it was represented by Liz Moore & Associates. The two sides previously worked together in New Kent on the Rochambeau Estates.

Three of those five are finished and occupied, and two are still being built.

The houses start at $330,000 and Harlow said the average cost so far is $395,000 due to different floor plans coming with increased costs. Three floor plans are available: the “Arlington,” the “Rappahannock” and the “Winchester,” designed by architect Tom Vavra of TM Vavra Associates, and sizes vary from 2,300 to 2,800 square feet.

Sherry Bryant with Exit Realty said she sold her first home at Timberlake Commons on Thursday, and has two more applicants in the pipeline that she expects to sell to soon. She hopes to sell at least 12 houses a year and estimates that all homes will be sold within three years.

NK and Exit previously worked together in Mechanicsville on Village at Pebble Lake.