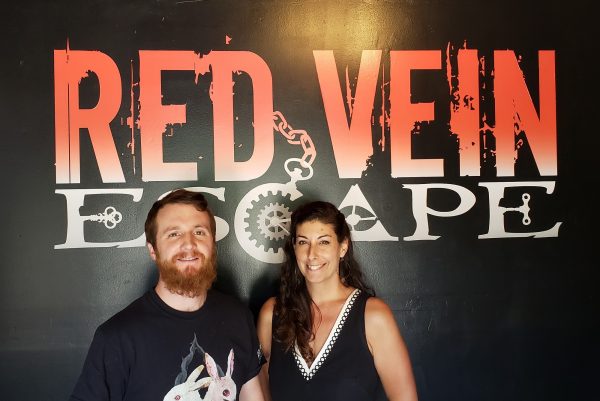 Ryan Sligh (left) and Kitty Barnes make up half of the ownership of Red Vein Escape, a vampire hunting and escape room experience. (Photos by Josh Cozine)

A group of experienced local haunted house operators has taken its knack for creating spooky settings to another level. 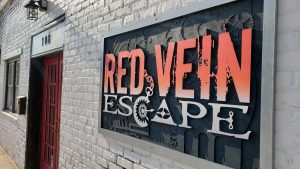 The venue formally opens today (Friday) at 5 p.m. with its official grand opening and ribbon cutting. It’s the first escape room in Ashland, following a trend in which similar facilities popped up around the region beginning in earnest a few years ago.

With eerie background sounds and the occasional horror-themed music in the background, the game takes place in three separate puzzle-filled rooms, culminating in a finale where participants stake a local urban legend, the Richmond Vampire, in the heart before escaping.

The Red Vein Army was founded in 2011 and became a full-fledged LLC the next year once the horror-themed jobs started coming in. They started out as a traveling haunted house troupe that performed at locations across the state every weekend in October. By 2016, the group had a permanent October location at the Hanover Vegetable Farm, which had a small, three-minute-long escape room component to it.

“The goal was always just to have a haunted house, but it became a business,” Sligh said. “We went from begging haunted attractions to let us work for them to charging them and having people ask for us.” 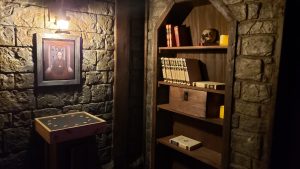 Part of the first room of Red Vein Escape. A painting of the Richmond Vampire hangs on the wall with a puzzle below that players must solve in order to move to the next room.

The building originally was partitioned and shared by Shear Power hair salon, which moved two blocks down and across the street, and Jezebel’s Boutique.

Barnes and Sligh found the building without the help of an outside broker after calling a friend in the area and driving by. They set up a meeting with landlord Lou Wilder the same day and eventually signed a three-year lease.

Sligh estimates the four owners combined have invested around $60,000 of their own savings so far, and that could reach as much as $100,000 by the time the second escape room is complete.

Powers is an electrician by trade and helped wire up the escape room. Hayworth, an engineer, oversaw much of the creation of the project and was responsible for the initial escape room idea.

The group did all of its own renovations aside from HVAC and plumbing, and cited decorations, custom artwork and design as being one of the major expenses — noting one prop that cost over $1,000.

“Every prop and detail in that room is incredibly costly,” Barnes said. “But we’ve built a reputation on very immersive set design, and it was important for us to carry that over into the escape room.”

The experience will cost participants $25 each and the escape is said to take roughly one hour, based on trials during a soft opening last Friday. A 10 percent discount is offered for groups of 10, which will be the largest size allowed.