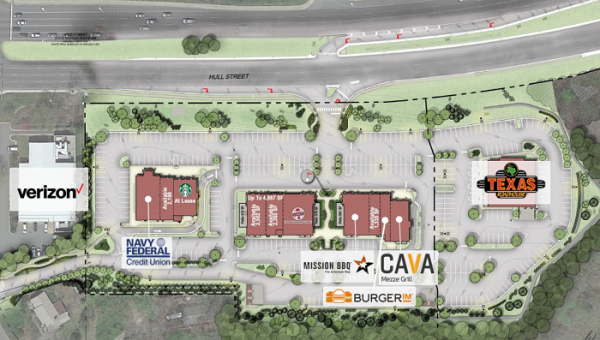 A layout of Swift Creek Place including its future tenants. (Thalhimer)

While they wait for construction to begin on their new location in Hanover, two local restaurateurs are speeding up their expansion plans with a venture in Chesterfield.

Walied Sanie and James Baldwin, co-owners of Social 52 in the Fan, are preparing to launch Charred, a new restaurant at the future Swift Creek Place retail center that’s under construction at 13501 Hull Street Road.

Sanie and Baldwin also are eyeing another Charred location in the future Shoppes at Rutland Place shopping center near U.S. Highway 301 and Rutlandshire Drive in Hanover County.

“(Swift Creek) is much further along in the development process … and we have been looking for an opportunity to bring this concept to the Southside,” Sanie said. “When we realized there was space available in Swift Creek, we moved on it quickly.” 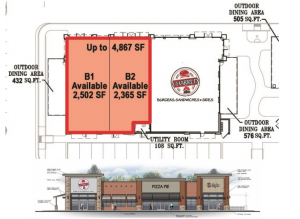 Charred will be located at the future Swift Creek Place retail center in Chesterfield. Click to see its exact location above. (Thalhimer)

The group signed a lease for the Rutland location in May. However, Sanie said the delivery date for the shopping center has been slightly delayed, pushing back the restaurant’s opening from this fall to around summer 2020.

The progress on the Swift Creek site should allow Charred to open by mid-November, Sanie said.

Charred will join several national restaurant chains in Swift Creek Place, including Texas Roadhouse, Cava, Burgerim and Mission BBQ. Aside from new restaurants, the strip also will include a branch for Navy Federal Credit Union.

Starbucks also is preparing to sign a lease for a drive-thru location in the development, according to a Thalhimer marketing flier.

Jordan Nielsen, who also is a broker with Thalhimer, is handling leasing on Swift Creek Place along with fellow broker Alicia Brown. 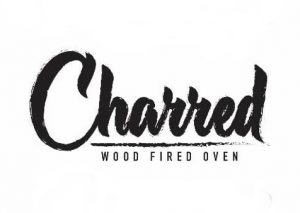 Charred’s menu, which is managed by Social 52’s lead chef, Alex Collins, will center on wood-fired and smoked entrees.

The Chesterfield location will seat about 155 patrons and have space for a 16-foot smoker, along with several wood-fired grills and ovens. The space also will include semiprivate dining areas to accommodate parties and events, and a bar and fire pit on the patio.

In total, Sanie said they plan to invest about $800,000 in the new space, financed in part by a loan from M&T Bank; and other financing coming from Sanie, Baldwin and several other investors from the area.

Richmond-based Bob Architecture is designing the space, while B&L Construction is the general contractor.

While its hours of operation are pending, Sanie said the location will be open for lunch and dinner, plus brunch on the weekends.

Charred’s latest excursion into Chesterfield is part of a planned regional expansion for the group, Sanie said. They also have signed a letter of intent for space in a pending mixed-use development in Williamsburg called Midtown Row.