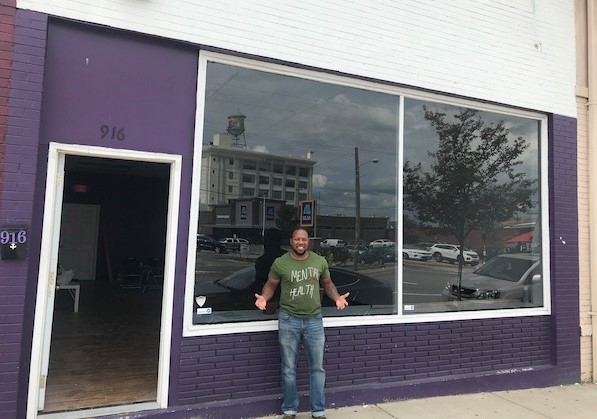 An Arthur Ashe Boulevard storefront that once peddled cellphones is getting a recharge.

The Healing Hub, which will offer a range of services from therapy to meditation to yoga classes, is preparing to open at 916 N. Arthur Ashe Blvd.

Behind the concept is James Harris, a local entrepreneur who’s also a co-owner at Brewer’s Waffles and The Well Art Gallery, both in Manchester.

“The main idea is for it to be a place where people can come to get resources,” said Harris, who received his master’s degree in counseling. “We’re going to do outpatient therapy, yoga, potentially get a massage therapist. We’ll do literacy, real estate and business classes.”

The Healing Hub will be focused on serving minorities and other groups that Harris said are underserved.

“There’s a lack of resources that are available for African Americans and minorities,” he said. “With everything that’s going on with racial inequality, women’s rights, minorities and LGBTQ inequality, I just want (The Healing Hub) to be a resource for the underserved and under-privileged.”

He added that The Healing Hub, which is a self-financed for-profit venture, also aims to serve the homeless with clothing and food drives, and that he’s talking with a local restaurant to serve them meals.

“We’re going to hopefully be in a position to serve food one or two times per month on specific days,” he said.

The Healing Hub is leasing the 2,200-square-foot space, which was formerly cellphone store Gadgetpass. Harris is renovating the space to include an open event area and private rooms. He said The Healing Hub is aiming to open this month.

Great job James for bring mental health to a place where it may not be as easily accessible and available! Keep doing the great work and leaving a positive impact on our community!!