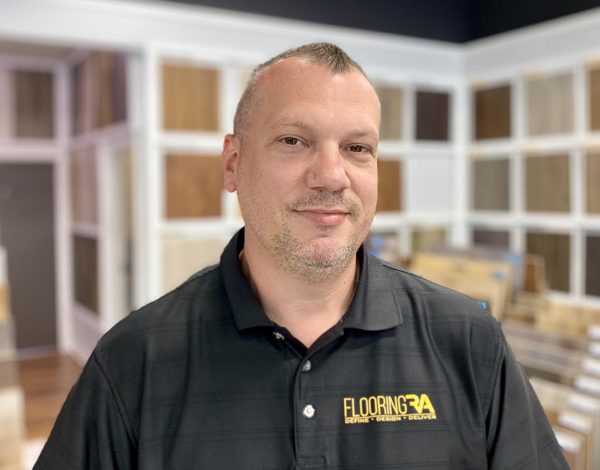 Robert Fletcher is betting the third time’s a charm for his 3-year-old shop, Flooring RVA.

After two moves in over two years, the carpet, hardwood and tile retailer is laying new foundation in the former Decor Furniture and Mattress Showplace at 7702 W. Broad St. in Henrico.

Decor Furniture & Mattress went out of business last spring after 12 years at the location. Shortly after, its owner Brent Samuel placed the building on the market.

That’s when Fletcher made his move.

“The guy that owned Decor Furniture … he was done with retail,” Fletcher said. “I saw it on LoopNet, but I didn’t have any financing lined up. I literally messaged him on Facebook.”

Fletcher toured the building and was hooked on its potential for his growing business. He put the 10,300-square-foot showroom and warehouse property under contract.

“He was there and he showed me the building,” Fletcher said. “I looked at him and said, ‘I’m going to buy the building; I’ll handshake on it. I’ll figure it out.”

He officially purchased the half-acre property in May for $854,000, according to county real estate records. It most recently was assessed by the county for about $780,000.

Flooring RVA offers a variety of flooring options for residential and commercial owners.

“There’s a lot of hard work behind it,” Fletcher said of his company’s growth. “If we make a mistake, or do something wrong, we’re going to take care of it. The buck stops with me … There is no out-of-the-country call center. It comes straight to me. That’s the joy of owning your own business.” 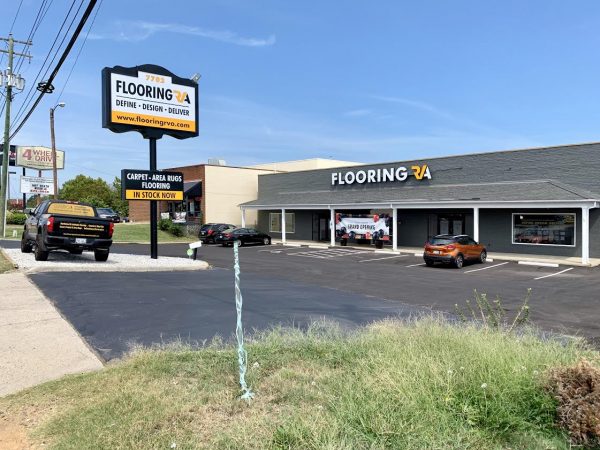 But after growing disenchanted with the day-to-day grind, Fletcher decided to leave his retail flooring career and open Flooring RVA in a small office on Dabney Lane in June 2015, which he bootstrapped alone.

“I didn’t have any displays or anything, and it was by appointment only,” he said. “I just sat on the floor … and started creating ads on Facebook and on Craigslist. I designed my own website.”

Two days into his new venture, a friend and flooring vendor got word of a deal too good to pass up.

“A couple of days after I signed the lease, one of my vendors called me and asked if I could rent a Penske, Budget or U-Haul truck,” Fletcher said. “I had to watch my money because all I had was $5,000 in the bank and I had to pay first month (rent) and security (deposit).”

Turns out his friend had a flooring dealer in Orange County that was going out of business and was looking to part ways with all of their flooring displays — for free.

“We went up to Orange County, got all of the displays and brought them back and set them up,” Fletcher said. “I was rocking at that point. All of my business was coming from Facebook … or me riding around seeing a construction site, walking in and talking to the superintendent.”

The hard work appears to have paid off.

During Fletcher’s first full year of business, in 2016, Flooring RVA generated $1.6 million in sales in Fletcher’s first year as owner. Sales increased to $2.2 million in 2017. Eventually, the flooring firm outgrew its Dabney Lane location and moved to 6414 Horsepen Road that year.

“Right out the gate, we were doing a decent amount of business,” he said.

The extra space expanded Flooring RVA’s showroom and pushed 2018 sales to $2.6 million.
Now the firm is on the grow again, more than doubling its space with a move to one of the busiest stretches of West Broad Street in Henrico County.

“I still can’t believe it,” Fletcher said. “When we got keys, me and my brother, who does installation for me, walked around the building. He literally had tears in his eyes and said, ‘Can we afford this, man?’ I told him, ‘Yes, but we have to keep doing what we’re doing.’”

A Henrico native, Fletcher has learned to overcome adversity.

“I didn’t have rich parents to give me this,” Fletcher said. “I came from a broken childhood; I lost my dad last year. I had all the challenges growing up.”

But Fletcher remained determined to live out his dream as an independent business owner.

“It always felt like it was something to get over the hump,” Fletcher said. “But we sustained it, and the growth has been tremendous.”

Flooring RVA sits down the street from the future West Broad Landing residential development by Reston-based Stanley Martin Homes. The latter closed on the former Lawrence Dodge 13-acre dealership property at 7411 W. Broad St. in January for $6.85 million, where it plans to build up to 200 condos.

Stanley Martin also is developing Wistar Glen, a 160-home development on 15 acres at 4613 Wistar Road, which is off Broad Street northwest of the West Broad Landing site.

“We bought this at the right time,” Fletcher said. “There’s a lot of growth happening in this area, which is going to help drive up the value of our property.”

Flooring RVA employs about eight people, which includes adding a third salesperson and a warehouse supervisor.

Fletcher has invested nearly $150,000 to overhaul the former furniture and mattress showroom into the company’s headquarters and distribution hub.

“It’s all still sinking in,” Fletcher said. “I’m just glad to be moving forward with this part of business and career. I’m blessed.”

Congratulations on all of the hard-earned success, Robert! Keep up the great work.

Congratulations Robert! Well done, I remember you and Tommy Lee Scott{ my son} used to play together when you were children, I’m so Happy to hear about your success, you are an Amazing young man, your mother is an amazing mother, and raise you to be a good son. Please tell her to never loose contact with me. Love, Regina Scott Whaley

Flooring RVA did the floors in my living room and kitchen and I couldn’t be happier. They did great work.

I couldn’t tell from this, are they installers or retailers?

I remember his statement to me well, “I have watch my money because all I had was $5,000 in the bank and I had to pay first month (rent) and security (deposit)”….. and that’s when I knew, he wasn’t a “normal” entrepreneur. I had to step up and get us a truck and get on the road. The investment in HIM was huge, well worth the few hundred bucks, and an immediate return on investment. And trust me, he had a LOT of haters… dare I say due to jealousy, because they knew that his hustle would cause them competitive… Read more »

What a beautiful success story. Congratulations and continued prosperity

Congratulations Robert. Thrilled we could work out a smooth transition into the building to propell you to the next level. Storefront looks GREAT!