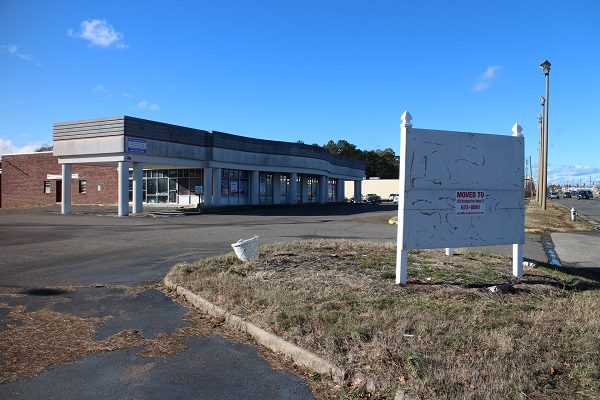 A Northern Virginia-based builder has secured the site of a planned residential infill development in western Henrico County, forking over three times what it paid for a slightly larger site less than a quarter-mile away.

Reston-based Stanley Martin Homes closed this month on the former Lawrence Dodge dealership property at 7411 W. Broad St., paying $6.85 million for the 13-acre site, where it plans to build up to 200 condos.

The deal with Lawrence Motor Co., which retained ownership of the site after closing the dealership, closed Jan. 4, according to county property records. A county assessment most recently valued the property at $5.24 million.

The land will be developed as an 18-building complex to be called West Broad Landing. Four acres fronting Broad Street are designated for commercial development.

Stanley Martin received zoning approval last year for the project, which is planned to consist of four-story buildings with “two over two”-style unit configurations, meaning two-level condos stacked on top of one another – similar to the company’s Saunders Station at Broad Hill Centre in Short Pump. 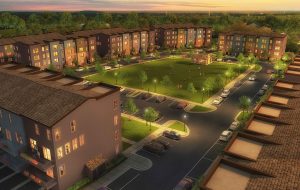 The company paid $2.1 million last year for that land, where it plans to build 136 condos, along with 24 townhomes to be constructed by another builder. A county assessment valued the unimproved land at $1.4 million.

Swink put that project’s total development cost at upwards of $30 million. He said a contract has yet to be signed for a builder for the townhomes portion of Wistar Glen.

Swink said a developer has been selected for the commercial portion of West Broad Landing. He said he could not disclose the developer and didn’t know if it had lined up potential users for the site.

Preliminary site work started two weeks ago on the Wistar Glen site, while development on West Broad Landing is scheduled to start in February, Swink said. He said permit approvals took longer than anticipated for Wistar Glen, which was previously projected to get underway last year.

Chesterfield-based CD Hall Construction is doing the Wistar Glen site work. Swink said a contractor for West Broad Landing has not been selected. 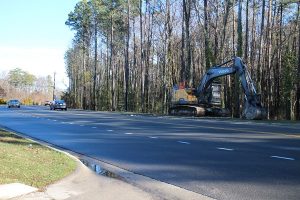 Initial site work is starting on the Wistar Glen site.

Stanley Martin is aiming to start building in both developments by the end of the second quarter, with the first units to be delivered by year-end, Swink said.

All of the Wistar Glen units will include three bedrooms and a dedicated one-car garage and driveway. Swink has said the condos at both properties are priced around the county’s median household income, which has increased from about $63,700 last year to $66,447 this year, according to the U.S. Census.

The stretch of Broad Street west of Glenside Drive has drawn investment interest of late. Across the street from the West Broad Landing site, the Nanking Restaurant property at 7408 W. Broad St. is under contract and set to be redeveloped as a car wash.

West Broad Street was described to me as a barbell, anchored by Willow Lawn on the east and Short Pump on the west with nothing of value in between. Gumenick has shown us that there is a value to redeveloping the “bar” as high quality residential. The Glenside office park location has roared back as an attractive employment area. Genworth will completely revamp their campus. And now Henrico has recognized that more high value high density residential can revive the commercial areas on the “bar”. Pulse will be extended from Willow Lawn to serve the corridor. The news is good.

My two cents, is that we really need to widen the Pulse system, instead of going up and down broad there should be some short “feeder” loops to bring people to Pulse.

But filling in the West Broad area as opposed to destroying green space by moving west is a great idea.

The plan is eventually to expand “Pulse” with a better feeder system on the north and south arteries. However, the GRTC has provided better service on those arteries already to feed the Pulse.

That’s good! I think the Pulse has a great chance or really changing the city, and “walkable from Pulse service” is going to pop up in a lot of real estate descriptions.

Great to see the redevelopment.

BUT did you all mean to write “Swink said a developer has been selected for the commercial portion of West Broad Village.” I am assuming this means a commercial space on the landing property. This is what happens when they all look the same and the names are similar. Why not Lawrence Motor Shops for at least the retail side or something more original that West Broad Landing!

True story: I went to visit friends in a south side suburb one night. I actually got lost because everything was “Blue jay Way, Blue jay Court, Blue Jay Landing” . West Broad Landing will eventually be known as “Those apartments behind X” with X equaling the most prominent non chain establishment in the commercial portion.

Street names are approved by a clearinghouse. If a developer is lazy, they can use a more than a half-dozen or so suffixes for a single name. Thoughtful ones will make an effort to not duplicate them. It’s always been a pain to give directions.